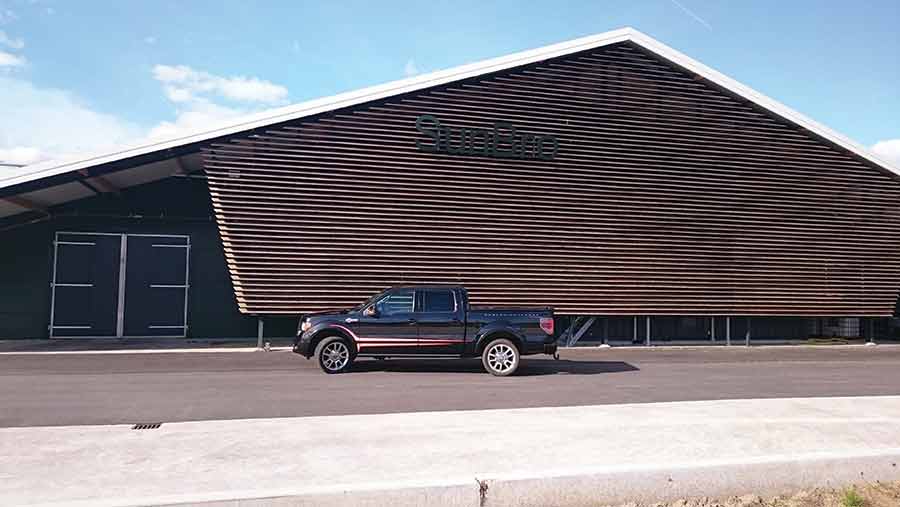 A Dutch poultry farmer has incorporated the latest technology when building a new shed housing more than 90,000 birds. Jake Davies visited to find out more.

Faced with an investment decision to put up a poultry shed, Dutch farmer Paul Grefte went right back to the drawing board.

He decided scaling up was the sensible way to go, and ended up with a 90,000-bird capacity shed, split down the middle with a vent capable of scrubbing any bad smells from the air it expels.

More than this, in order to truly construct something fit for the future, he decided to balance power consumption with the aim of being as close to “energy neutral” as possible.

“We wanted to create a new house with the best health and welfare for the birds,” explained Mr Grefte. He said that, in developing his SunBro poultry unit – a concept he is now selling – the latest technology was adopted across the board.

The barn is an A-frame split down the middle with around 45,000 birds each side. There is underfloor heating, and ventilation is so precise there is little need to adjust the air inlets, which are filtered and fixed in place.

Initially, the shed floor is warmed to a uniform 30C, with the warmth drawn from a ground source heating system, which has kilometres of piping buried in a nearby cornfield.

In addition, the air inlets are capable of pre-heating the incoming air, meaning a uniform temperature for the bird’s environment.

After two to three weeks, the body warmth of the broilers sustain this temperature, and heat can be drawn from the shed itself. This is used to either warm the incoming air as necessary, or stored in the cornfield.

Furthermore, the air scrubber produces 25C in its operation – another ready source of heat if required.

This means the shed’s energy requirements are usually in near equilibrium. It is easiest to imagine the entire system as a sophisticated heat exchanger – a radiator that can warm or cool different areas as required.

Yet, despite all the high-tech gizmos, the shed has been set up to ensure the broilers are grown as cheaply as possible.

Bedding is inexpensive pelleted straw from Lithuania and wheat is mixed with the feed ration at up to 30%.

“My total focus is on lowest cost per kilo of meat produced,” explains Mr Grefte. Not the stuff of precision farming, perhaps, yet it is where many progressive Dutch farmers focus – rather than on feed conversion or other measures.

The birds are grown to 42kg/sq m and will be entirely exported, bearing in mind that the Dutch retail sector now requires that birds are reared to higher welfare standards, akin to Freedom Food standards in the UK.

The shed is based on an A frame. It is high enough to keep the pitch of the roof similar to that of a conventional shed, but also allows for better air circulation.

The most striking difference at the Sunbro poultry unit is the centre partition (left of picture) splitting the huge shed into two flocks of 45,000 birds.

Furthermore, if a building is energy neutral, it is possible to recover 130% of the build’s cost against a tax bill.

This is the thrumming heart of the heat exchanger, a key part of the Sunbro concept. “Our aim was creating a house which has a perfect climate for broilers with no emissions and was energy neutral,” says Mr Grefte.

Heating via air inlets ensures a uniform temperature coming into the shed. A 220kWp solar installation on the roof provides much of the electrical energy, but the heat management is what really gives the build top environmental credentials.

Pipes buried under a cornfield nearby, those in the underfloor heating and the warmth generated by the air scrubber can all be interchanged to keep the shed in balance.

If the shed is too hot, it can be cooled by the corn field. If they need warming, the air scrubber’s heat can be exchanged to warm the floor.

It means the shed is effectively energy neutral, while undertaking what are traditionally energy intensive practices.

Mr Grefte housed both the control room and the heat exchange interface in shipping containers adjacent to the main poultry shed, reckoning that was the best way to mitigate any fire risk.

“In the Netherlands, farmers are heavily criticised if a poultry shed burns down, because of the relatively large loss of life. This is designed to prevent that.”

Windows are triple-glazed, and can be opened and closed automatically. Mr Grefte decided to install them to improve the working environment of the shed, and to show that his concept could handle them.

But if a farmer wanted, he would be just as happy to build a shed without. He feels the solar lamps installed in the roof are the more effective light sources.

Cladding was installed at the front of the shed – it both protects the metal shipping containers that house the control rooms, and improves the appearance of the overall building.