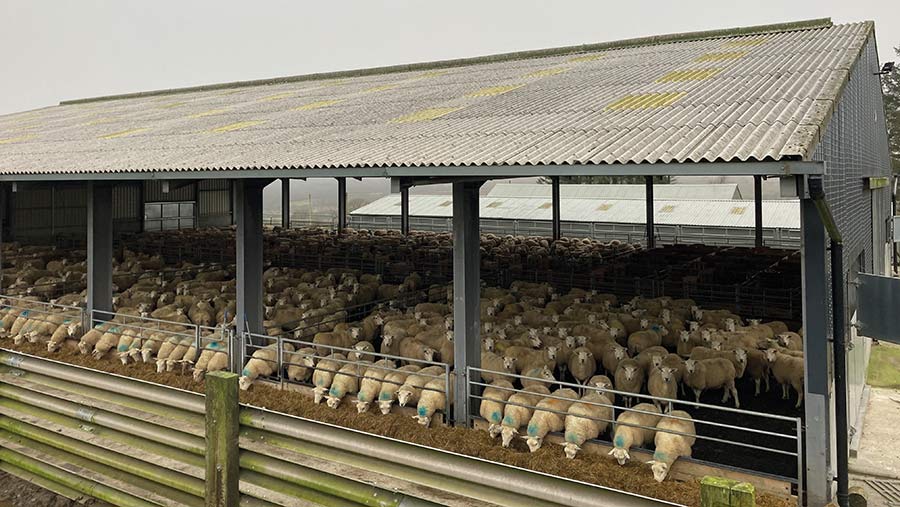 Investing in a slatted sheep house has enabled a Scottish upland sheep and beef farm to see the full effect of a breed change, while controlling labour and input costs.

The Howatsons have lambed the Lleyn portion of their flock indoors at Risk Farm, Newton Stewart for seven years. Prior to that, everything was lambed outside.

But thanks to a slatted shed, finished in the spring of 2015, the farm has seen rearing rates lift, labour cost fall, and only a negligible lift in straw spend.

Historically, the Howatsons ran 2,000 Scottish Blackface ewes, lambing everything outside.

About 1,000 ewes were crossed to a traditional-type Bluefaced Leicester to sell breeding lambs at Castle Douglas and the rest were bred pure for replacements and the prime and store market.

However, the upland weather systems and proximity to the Galloway Forest meant mortality could be high owing to fox and corvid predation. The tough ground meant the farm was limited to selling lower-value running lambs.

Back in 2006, Alan, who farms with daughter Hilary and son John, experimented with Lleyns.

He thought the breed’s hardiness and maternal ability could be a good fit for the ground the family farmed.

The relatively high number of high-health Lleyn flocks meant that sheep could be bought in with little disease risk. Some sheep were bought from the Cursiters on Orkney.

“This is a rough farm – the small amount of ground we can reseed is done with a digger in the field to remove stone,” explains Alan. “To ensure the Lleyns could cope, I mixed in some with a group of Blackies and they held condition and managed fine without needing extra feeding.” 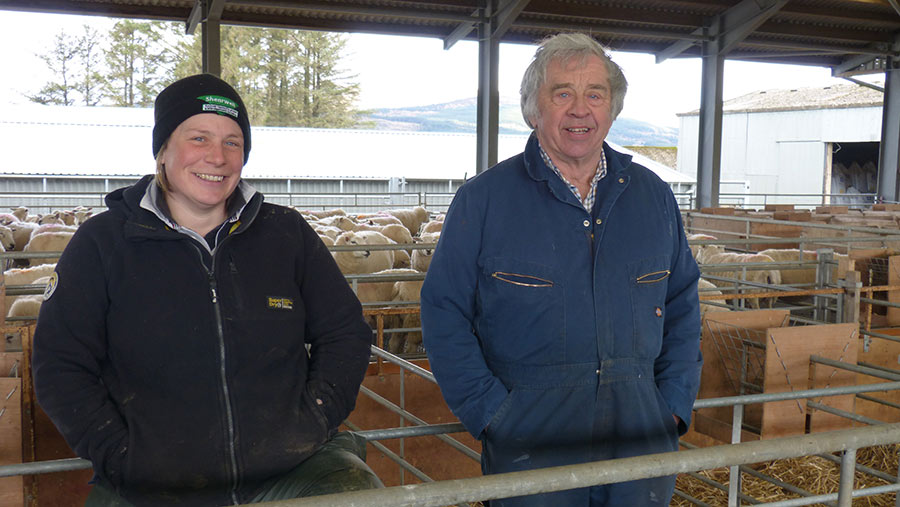 Lleyns lamb from 1 April, with about 80% lambing in the first 10 days and only 40 or 50 lambing on the second cycle. The 600 Blackfaces start lambing outside on 25 April.

Tup raddles are changed every 10 days on the Lleyns, which helps house sheep that are close to lambing.

Any lame ewes are jabbed, foot-bathed, and put back to grass again for a few days to allow their feet to heal before being housed on the slats.

The farm is Quality Meat Scotland assured, so bedding must be provided for newborn and young lambs. There are 54 straw-bedded pens on the central concrete feed passage, which sheep lamb in.

A drinking hole is cut into the pipe which runs between two lines of pens, meaning one drinker supplies two ewes, explains Hilary.

The plastic slats are disinfected with a Defra-approved disinfectant via a knapsack sprayer halfway through lambing to prevent the build-up of pathogens.

Before they leave the shed, lambs have their navels dipped in iodine. They are then marked, vaccinated for orf, tailed and castrated.

Lambs are usually inside for only 24-48 hours. Ewes and lambs are taken out to pasture in a quad bike trailer. 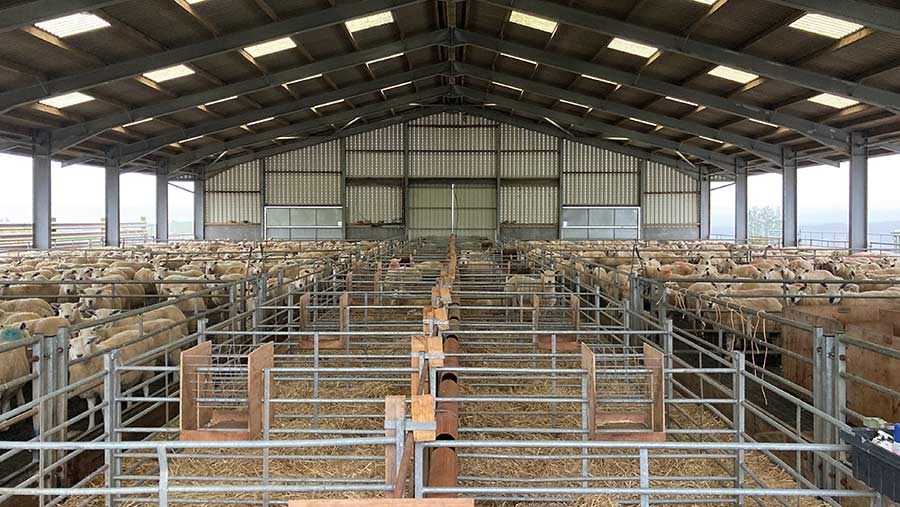 Housing the ewes fits in well with the cattle enterprise, as the sheep can share the Keenan forage wagon. Each year silage is analysed, and a cost-effective energy source bought in to feed the sheep.

Last year, a mix of barley and beet pulp was used. This year, 0.6kg/day of an 18% crude protein beet pulp cob was fed to the twins and singles, with silage supplied ad-lib and sheep eating to their own appetite.

The silage is chopped to a length of about 20-22mm and well mixed. Sheep are fed as and when forage needs replacing.

Home-made hay racks supply two pens each and include a catch tray for concentrate feed. Hay making has become too difficult in the wet climate, so is all bought in. 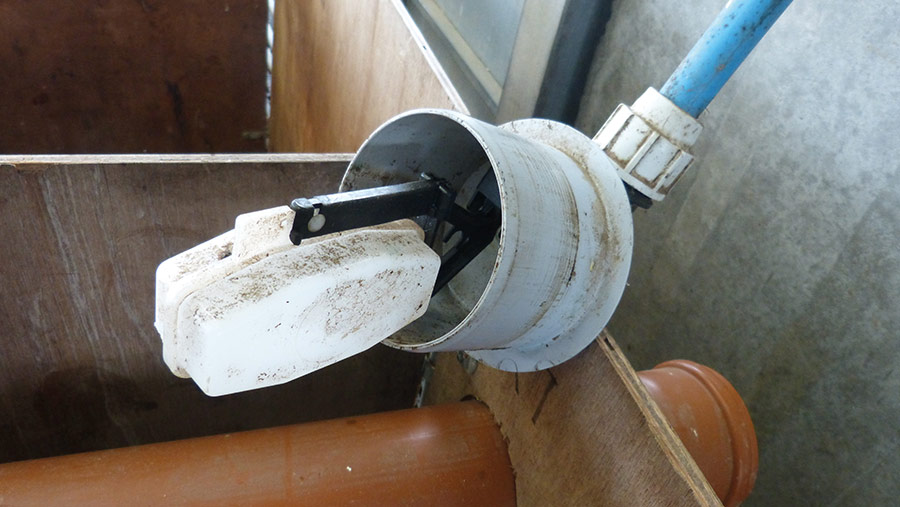 With the help of indoor lambing and lower newborn lamb loss, the Lleyns typically rear 155% or more after scanning at 164-168%. This compares to the Blackfaces, which scan at about 150% and rear 130% outside.

The shed can be bedded with 1.5 Hesston bales, and requires only five or six for lambing.

Because relatively small amounts of straw and hay are used by the sheep, it can be bought and stockpiled in cheaper years.

Less time spent bedding and mucking out means the farm can lamb with two lambers, as opposed to three when lambing was outside. The farm’s labour consists of John, Hilary and Alan (who is retiring soon), a full-time farm hand, and a lamber for three weeks each spring.

At other times of the year, sheep can be housed on slats at short notice before shearing or cull ewe sales.

Ewe lambs can be wintered in the shed to rest pasture and more than 1,000 wethers can be housed for finishing, while longer-term lambs are stored on kale.

Housing lambs keeps them dry and shortens finishing times. The farm used to sell 20% of its wethers in the spring as stores, but can now sell all of these as prime lambs.

The slatted shed is an attraction for lambers looking for seasonal work as it’s an efficient and pleasant place to lamb in. It is well ventilated and has electric lighting for the night check.

“It’s hard to justify a shed like that for sheep,” says Alan. “However, it’s more efficient, makes running the farm easier and saves on labour, which is harder to find than ever.”