A new pig unit at a Welsh college farm is thought to be the first in the UK to integrate every stage of production under one roof.

Not only has the new unit shaved an average of three weeks off finishing age, but controlling the climate according to pig group is proving beneficial to feed conversion efficiency. 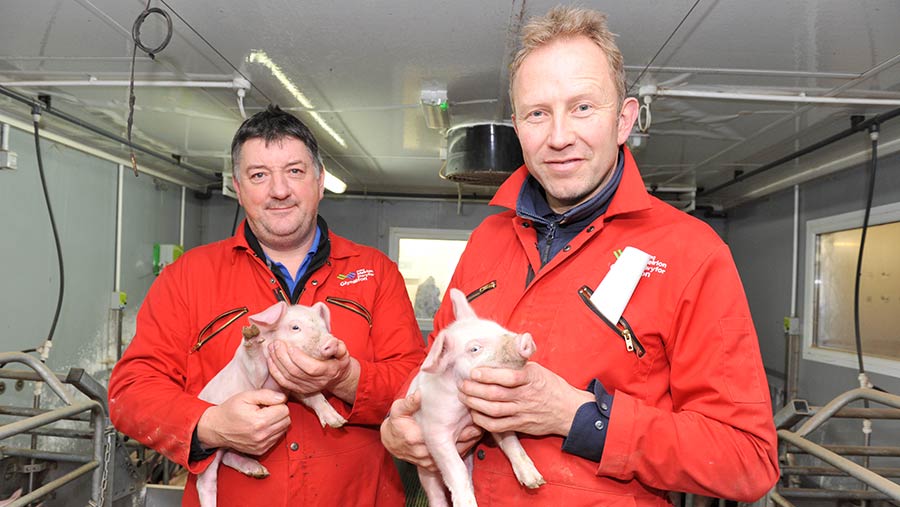 It was a joint effort between farm staff and the supplier, Finrone Systems, but we let Finrone take the lead because it had expertise in the specification required. 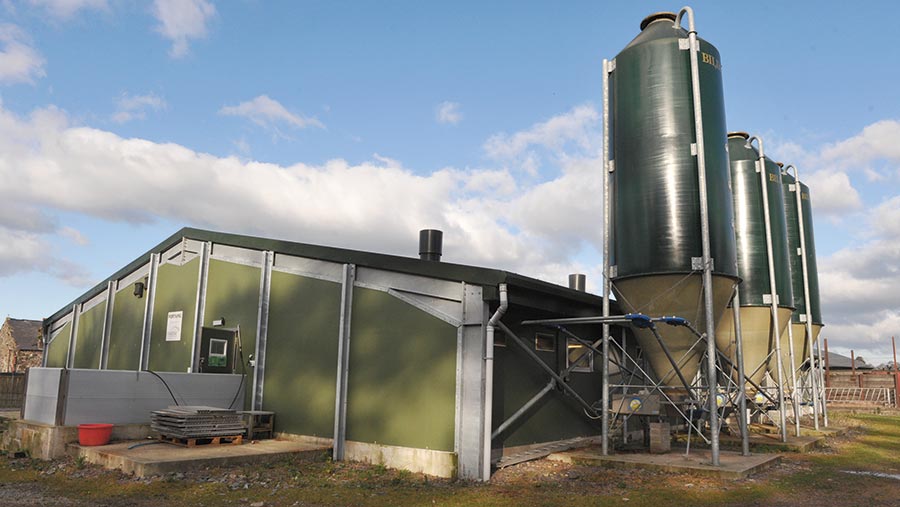 We wanted to have everything under one roof because we had a limited development area and also because of the requirements for our students during practical skills sessions – it means students can follow the pigs from start to finish in the same working environment.

This was a bit of a challenge for Finrone, as it was a first for them. 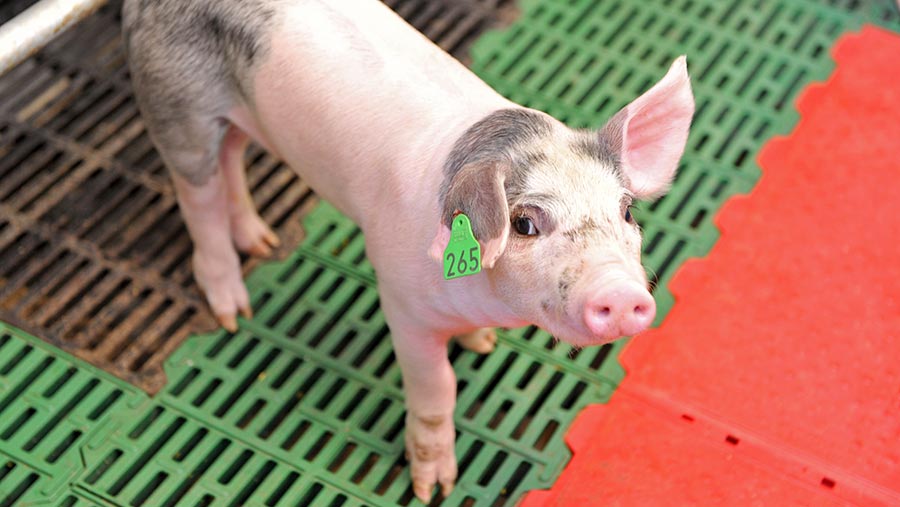 Our initial budget was £350,000. We did stick to the initial tender, but some electrical supply complications and delays in equipment impeded progress of the 20-week start to completion plan.

It is a pre-fabricated steel-framed building, measuring 30m long and 18m wide. It was made in Northern Ireland and transported here.

It has 10 rooms – two for farrowing, three for weaning, four for finishing and a large dry sow room. Each room is sealed and is climate controlled.

The floors are both plastic and concrete slatted, allowing the slurry to fall into underground tanks. 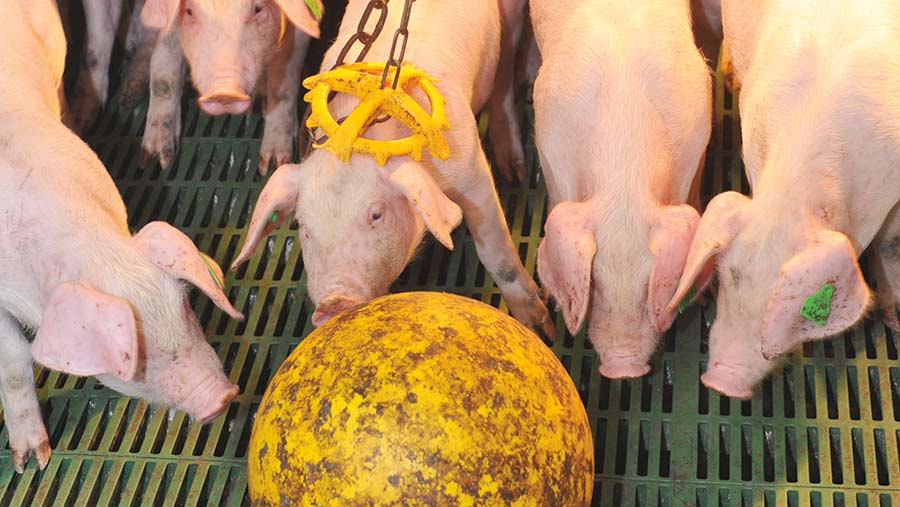 Floors are both plastic and concrete slatted

It is a very robust building; the pigs have been in it for two years and there is no damage. And if any of the panels are damaged, replacing them would be straightforward.

An infrared beam detects when a sow puts her head into the feeder and 15g of feed is dropped into the trough, so no electronic tags are needed.

The feeders are pre-programmed to provide a set number of feeds every 24 hours. There is a time delay between each feed drop which stops greedy sows from gorging.

They might hang around the feeder expecting more feed but when that doesn’t happen they move away, and this allows another sow to access the feeder.

The body condition score of the sows is even within the pen groups, so we know it works.

The length of the time delay depends on how many sows there are and the ration being fed. After insemination, the sows get 3kg for the first four weeks and then 2.4kg/day until the last four weeks before farrowing, when they get 4kg. 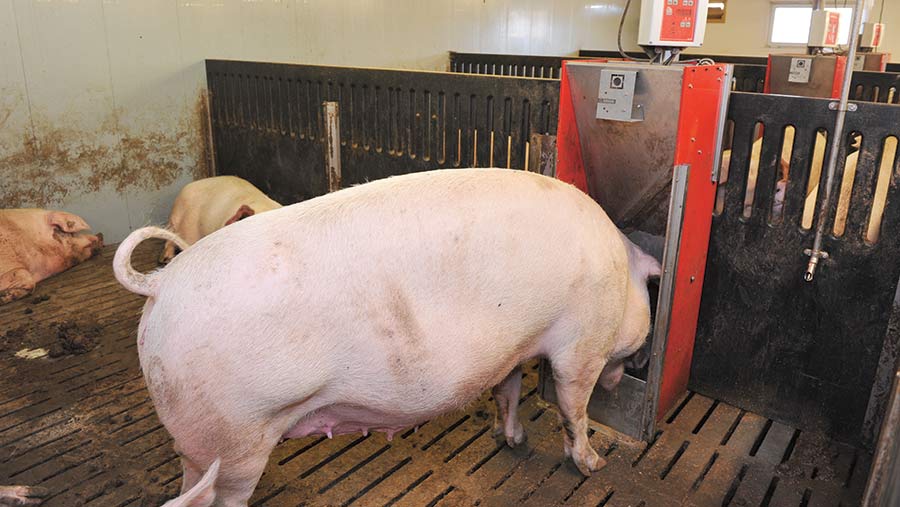 We used 5.5t of feed a week across the pig groups which meant a lot of carting around in the old system, but we now have a chain and link system that transports the feed from the bins to the hoppers in each of the rooms.

While the feeders are delivering the feed, staff are free to deal with pig husbandry, time they wouldn’t have had before. 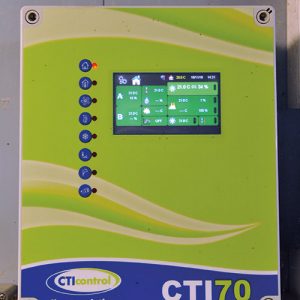 The CTI ventilation system. We previously housed pigs in a straw-based converted building that didn’t allow us much control over the temperature and environment.

This was a problem for feed conversion efficiency because the pigs were getting hot in the summer and not eating, while in the winter they were eating more than they needed to keep warm.

The biggest cost in pig production is feed – for us this has gone from being a problem to something we can do very well.

We can vary the temperature in each room according to pig group – the farrowing rooms are set at 21C, the growers 28C, finishers 23C and the dry sow room 18C.

The temperatures can be maintained constantly.

A high-pressure line that runs through the building with three junctions along it for attaching a pressure washer lance to. 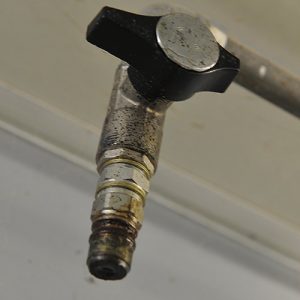 It means we don’t have to drag the washer and pipes around the building when we are cleaning and, because the machine can be situated outside, there are no fumes, which is a real plus.

One of the drawbacks of the unit is that there is a lot of cleaning time because of the number of rooms, but this facility makes the job easier.

Make it bigger! We could grow the herd size in the future and if we did the system could easily be upscaled.

A refrigerated semen storage box stores the semen at 17C.

It has been a good investment, as we are getting an insemination success rate of more than 90%, with very few repeats.

We block-farrow every three weeks, farrowing 10-12 sows a month. Because space is tight, we have to forward plan how many we serve, because one farrowing fills up our weaner room.

We wean on a Thursday, serve on a Tuesday and farrowing is on a Thursday three months, three weeks and three days later. 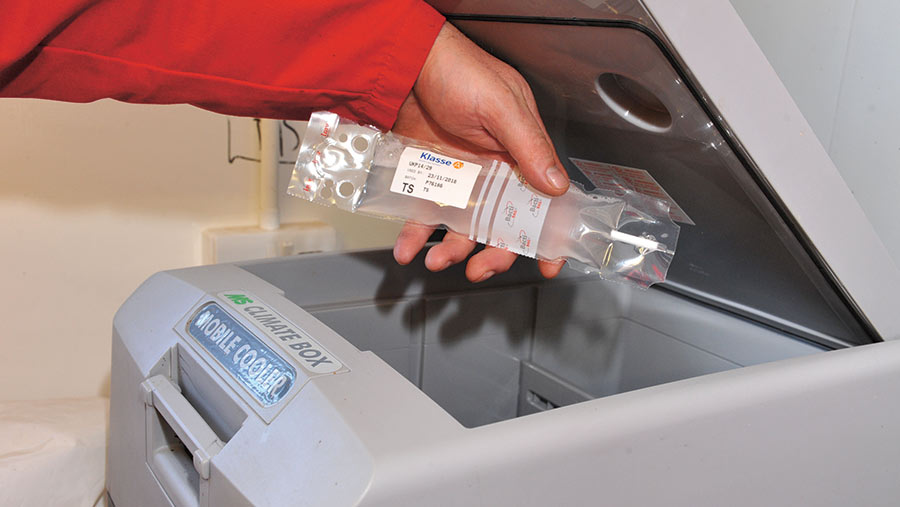 What improvements have you seen since installation?

We had been selling at 19-20 weeks at an average of 80-90kg, but we are now achieving that at an average of 17 weeks and younger. Quicker finishing times are the difference between making money or not.