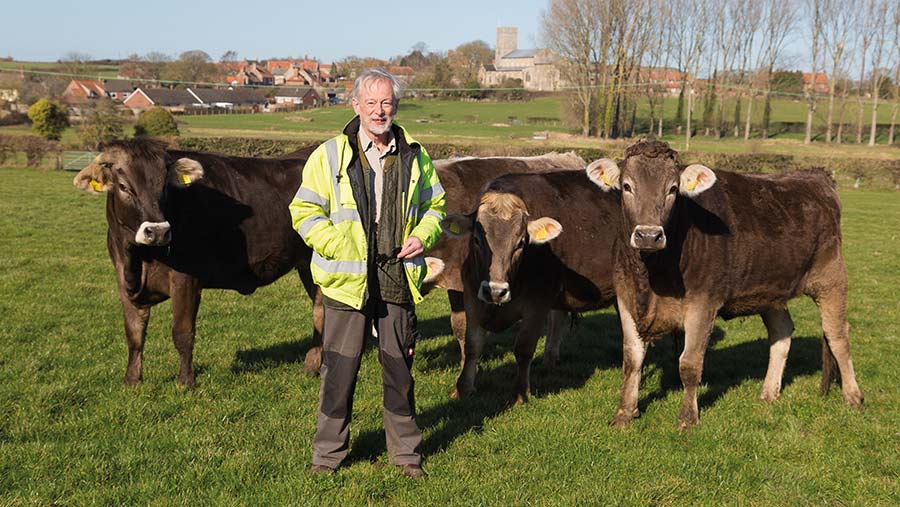 Changes to slurry storage regulations 12 years ago signalled the start of a new approach.

The ruling, that for muck to be stored in a field, it had to be solid enough to stack in a heap, presented Dr Temple with a problem.

“I didn’t want to spend a lot of money just to meet new regulations, but wanted to earn money as well,” he says.

The solution was an on-farm AD plant.

Producing energy from waste had always been in the back of his mind: a trained engineer, he had helped build a simple plant while working in Malawi in the late 1970s.

Installing one on his farm could solve the slurry storage problem and produce power, heat and high-quality, consistent fertiliser.

“The timing worked well for us, as my father had recently died, and we had a farm sale that released some capital for the plant. It would have been hard work [to finance] on an overdraft.”

The AD plant cost about £800,000, with a projected payback of eight years, later revised to nine years because of teething problems.

“The first engine in the combined heat and power unit was not up to the job and had to be replaced,” explains Dr Temple.

“So we really only started generating [electricity] properly after 15 months of gas production.”

All the slurry from the farm’s 130 dairy cows is fed to the digester, together with 200t of maize silage a month.

Whey from the farm’s cheesemaking, run by Dr Temple’s wife, Catherine, also goes in the digester. And, more recently, lucerne has been added to the mix.

The resulting digestate is separated into solid and liquid components and used as fertiliser.

The liquid is stored in two lagoons with a combined storage of 4,000cu m – enough for 10 months – and applied to fields with a trailing shoe tanker.

Solids drop into a trailer for weekly transportation to fields not connected to the farm’s underground main for the liquid and are stored in heaps, ready for spreading.

As well as savings on bought-in fertiliser, fixed costs associated with growing maize have been reduced by moving from a plough and power harrow-based system to strip tillage. Other crops are direct-drilled.

Short-term grass leys are sown after barley, harvested the following May for first-cut silage, irrigated, and then the ground is prepared for maize using strip tillage.

This way, three different crops are grown on the same field in two years.

In other fields, winter cover crops – generally a mix of a cereal and a brassica – are established after harvest to protect the soil until maize is sown.

Switching from fodder beet to lucerne as part of the cows’ ration and as feed for the digester has also reduced the number of passes in the field.

“It’s treated with one herbicide in winter, receives one dose of digestate and, as a legume, it needs no nitrogen. We take four cuts a year.

“As it’s in the ground for five or six years, it doesn’t really fit neatly into a rotation.

“But we will put it in following a maize crop, then six years later take a first cut before strip-tilling maize into the stubble, followed by barley.

“We’re trying to gradually move it around the farm, but it will take a while. It does wonders for soil structure and fertility.”

Gas from the AD plant produces up to 170kW of electricity for the farm and the grid.

The process also generates heat, which is used for grain drying, cheesemaking, the farmhouse, office and three cottages.

Heat is also used for hot water in the dairy, including a daily machine-wash of reusable udder wipes, and warm drinking water for the cows in winter.

The farm’s first electric farm vehicle, a 12-year-old John Deere Gator, was bought to use for fetching the cows in for milking. 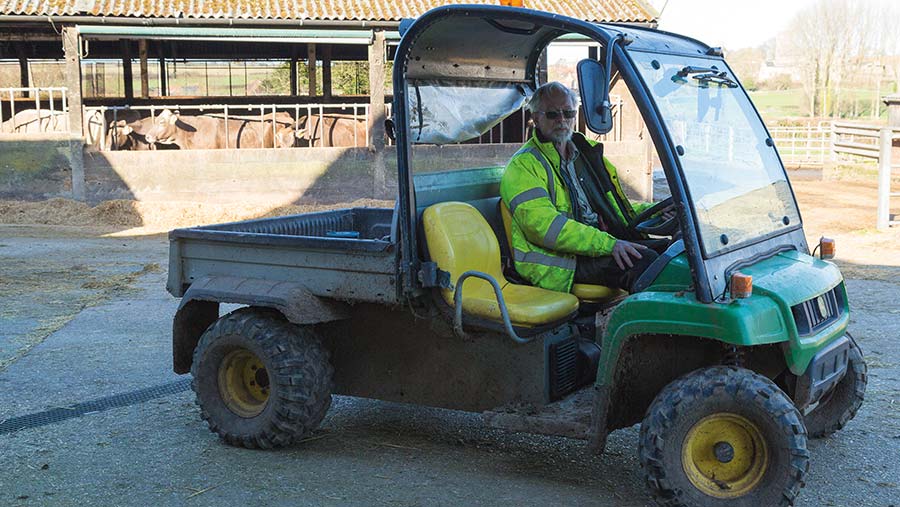 It was a second-hand model from a local council and cost about £2,500.

“It’s made for golf courses and utility uses, and the suspension is not as good as the diesel ones, which are more suited to hill farms.

“But on a lowland farm, it’s perfect. It’s really a motorised wheelbarrow, and it costs next to nothing to run.”

A DGM 800E electric loader has just been delivered to the farm. 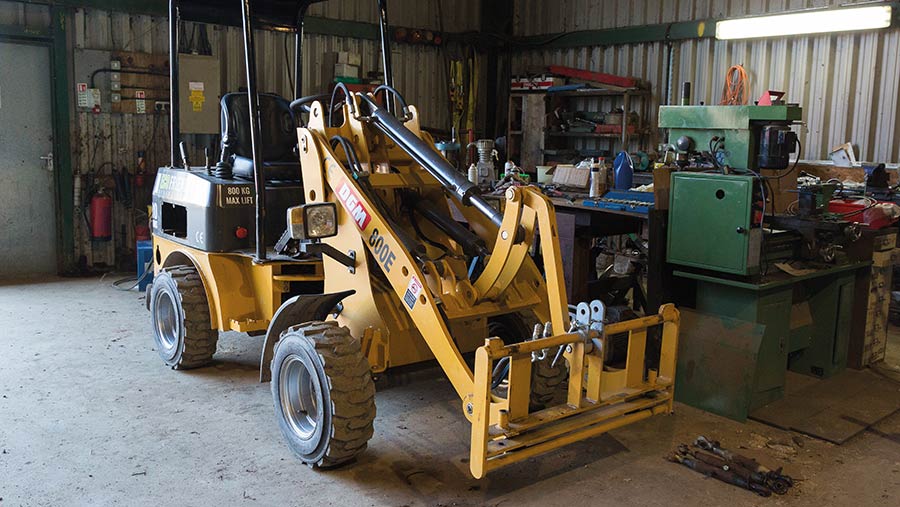 It’s too small for heavy loading, but is being modified to carry a front-mounted slurry scraper, replacing a “very tired” tractor.

With a list price of £9,750, it had a fault that couldn’t be resolved by the dealer, so Dr Temple bought it as a non-runner at a substantial discount and fixed it.

“The alternative was another tractor,” he says.

“I could have got something a bit better [than what we have] for the same price, but something significantly better would have cost £20,000.”

“The more we use electricity, the better,” he says.

“And there are basically no servicing costs – two of the electric cars have a minor service each year, and the third doesn’t even have to be serviced to keep its warranty.”

An electric bore pump has replaced a diesel engine that was used to pump water for irrigating grass.

It’s a static setup and running an electric wire to it was a substantial investment, at £10,000.

But it’s much simpler to use, as it can be operated remotely using a mobile phone app.

Next to buy is a larger loader. JCB’s electric models are 40% dearer than its diesel counterparts, according to Dr Temple.

Instead, he is hoping to try out a Faresin Telehandler 6.26, now that it has flotation wheels to give better ground clearance.