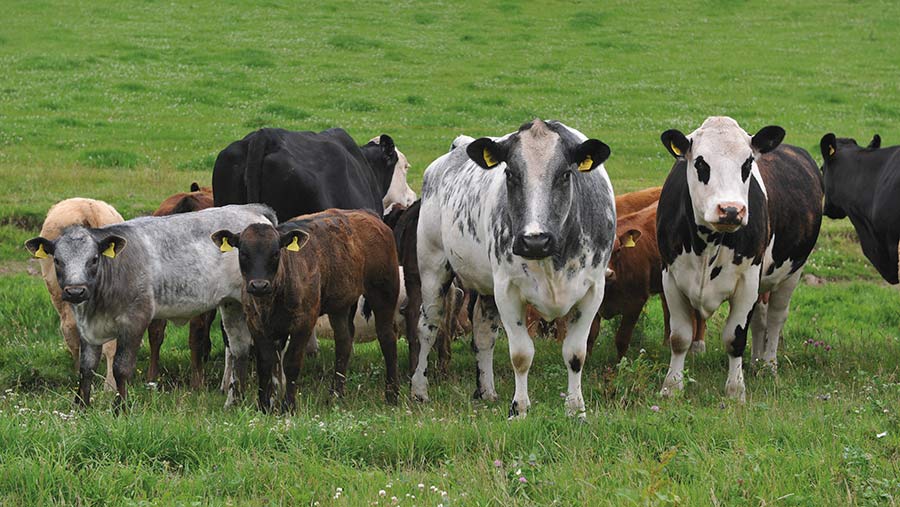 Good nutritional management, a high bull-to-cow ratio and attention to detail is enabling a Pembrokeshire suckler beef enterprise to halve its calving period from 12 weeks to six and calve 68% of the herd in the first three weeks.

The Reynolds family keep the calving period tight because they have off-farm businesses.

Mark, who farms with his parents, Russell and Debbie, is involved in the family steel fabrication and shed building business and his wife, Gemma, runs a travel business.

“Calving has to be short and compact,” insists Mr Reynolds, who farms part of the Dale Castle Estate and National Trust land. 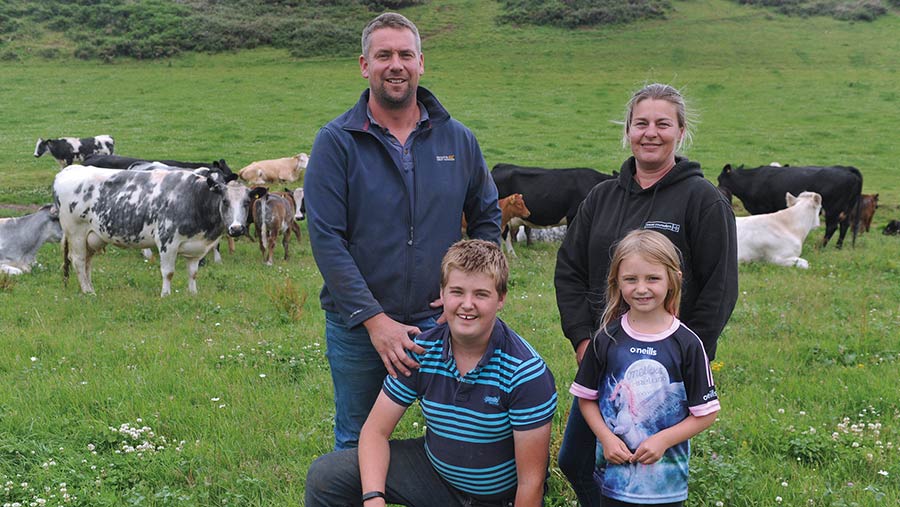 Cows calve from the second week of March indoors and are turned out within two or three days of calving, weather permitting. This year they calved 65 animals in the first three weeks and all 90 calved within six weeks.

“It was our easiest calving and we didn’t lose a single animal at birth,” adds Mr Reynolds.

Limousin bulls are used on cows and an Aberdeen Angus on heifers.

To prevent diseases being introduced from outside sources, virgin bulls are purchased at between 15-18 months old, before they have started working so they don’t pass on venereal diseases.

Bulls are fertility tested every two years. If they are fertile they are retained – one of the existing bulls is eight years old.

Limousin bulls are purchased from the breed society sale in Brecon and Aberdeen Angus bulls from Gloucestershire breeders Paul and Kirsty Westaway.

The main characteristics the Reynolds family look for in a bull’s estimated breeding values (EBVs) is how easily his calves will be born and how fast they will grow. 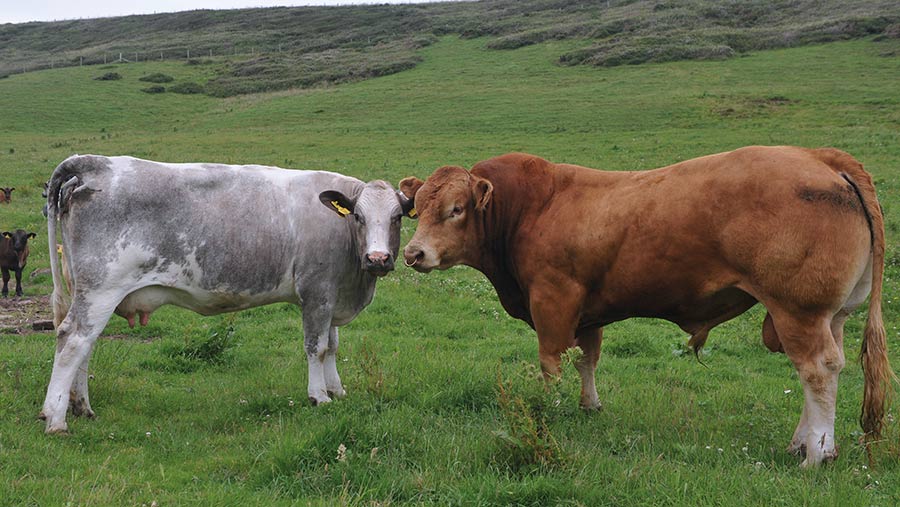 “Calving ease and 200-day and 400-day weight are important. We want calves that are going to grow,” says Mr Reynolds.

The Reynoldses prefer to buy first-cross dairy heifers instead of breeding their own replacements. These are selected for their milkiness and temperament.

The herd is predominately British Blue-cross dairy with a small number of Herefords and Limousins.

“My own Limousin suckler-bred heifers wouldn’t be the right temperament to keep as replacements. The heifers we buy are often bucket-reared and are easy to handle,” explains Mr Reynolds.

“Some people might say that four bulls to 90 cows is high, but when you are keeping your calving pattern tight, the cows only get two cycles.

“They don’t cost a lot to run – the biggest cost is getting them to 18 months and the breeders do that for us.”

Bulls are turned in with the herd on 25 May. Pregnancy diagnosis is carried out twice, the first at 42 days after the first four weeks of service, to detect which animals have held in the first cycle.

Anything that isn’t pregnant within six weeks is culled. “We don’t want to run them on or calve them in the autumn,’’ Mr Reynolds explains.

The results of the first scan allow the nutritional needs of the animals to be targeted to their stage of gestation and will determine when they are housed.

As cows are at similar stages of gestation, it is easier to keep them in the right condition because their dietary requirements are more alike.

Hay is fed in the four weeks before calving. Mr Reynolds switched from making clamp silage to big bales four years ago.

“Making 100 acres of the same stuff and mixing it with straw to limit what the cows were eating was just creating work,’’ he says.

He invested in his own baler and now makes good-quality silage for youngstock and fodder for cows from older leys or from grass that has gone to seed. A thousand bales of silage and 400 bales of hay are made annually.

At weaning in the autumn, cows are housed on straw to dry off and given a trace element bolus containing high levels of iodine and selenium.

After two weeks, cows are turned out to graze on forage rape and stubble turnips, supplemented with big bale silage or haylage, until the beginning of February.

They also have access to pre-calving mineral buckets six weeks before calving.

How the Reynolds family keep the calving period compact

From early August, calves are offered an 18% protein coarse mix made up of flake maize, sugar beet and cereals. Once they are consuming 2kg/day, they are introduced to a 16% protein home-mix of barley, oats, sugar beet, molasses and a protein pellet.

“We don’t push the Aberdeen Angus calves as hard as the continentals because the home-mix is high in starch and they would be prone to getting a little fat on this. We make good-quality silage so the Angus calves get 1kg/day of the mix.

Calves are weaned in two batches in November and December, at eight months when they weigh 400-450kg. They are vaccinated against pneumonia, their backs are clipped and they are housed until the following spring.

After weaning, calves continue to have access to the creep feeders for two weeks to provide continuity, with the amount of feed in these gradually reduced.

Since the calving period was tightened, there have been fewer calf mortalities. In 2018, calf mortality at calving was 4.5%, in 2019 it was 3%, and this year it has been zero.

One of the possible reasons for this is that the short calving period means that pathogens have less time to build up in the sheds.

“When you are calving six or seven a day you are out there all the time, but when you only have one or two there is a danger you can take your eye off things,’’ says Mr Reynolds, who employs a part-time worker, Richard George, and is supported by Gemma and their children, Daniel and Millie.