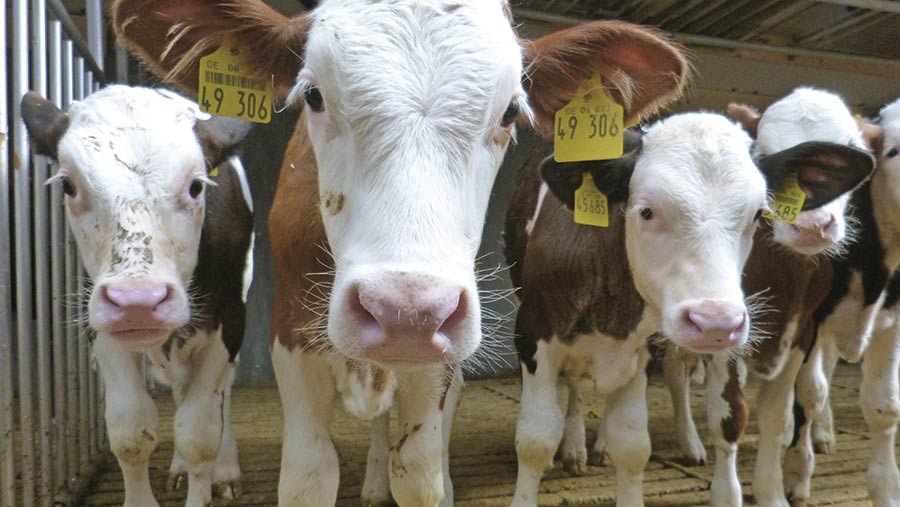 Strict regulation has more than halved Dutch antibiotics use in recent years as a new era in farm health planning and probiotics has driven livestock systems.

More frequent veterinary visits, a three-step antibiotics request programme and antibiotics alternatives have been used to maintain productivity and rein in medication.

In addition, “naughty lists” of vet practices not curbing antibiotics use have been published nationally as an incentive to veterinary surgeons to make changes.

Dairy veterinary surgeon Erik Boer of Vechtdal Animal Clinic said he is under much greater scrutiny than before.

Farms and vet practices are anonymously classed according to antibiotics use as green (good) amber (needs improvement) and red (bad).

“Most farms are in the green section,” explains Mr Boer. “As a last resort vets face losing their license if they are in the red.

“Mortality has increased on some farms but not as much as perhaps expected. You have to change your mental attitude. Sometimes it would be easier without all the regulations but I do believe in what we are doing, it does get results.”

This includes reductions of 99% and 68% in cephalosporins and colistin respectively, which are both on World Organisation for Animal Health and World Health Organization lists of “critically important antibiotics”.

To monitor farms and measure sectors against each other all usage was measured in defined daily dose, as opposed to the miligrams per kilogram method adopted later in the UK.

A range of measures were enforced in 2011 which saw preventative use of antibiotics inhibited and all antibiotics falling under a three-choice rule.

From 2012, farms started getting one-to-one contact with a sole veterinarian who prescribed and delivered antibiotics. Annual health plans were backed up with monthly visits for pig farms and quarterly visits for dairy farms.

A host of antibiotics alternatives have been embraced to replace drugs, in a similar way to how some UK farms have adapted to reduce antibiotics use.

Such alternative techniques have included prebiotics, probiotics and improved farm biosecurity, as well as greater uptake in vaccines.

Many livestock units have embraced probiotics and acids to alter gastrointestinal microbiology (microbiota) to suit “good bacteria” such as lactobacillus and bifidobacterium.

Feeding straw to calves from the day they arrive, attention to milk temperature and two plant-based drenches are used to support intestinal health.

One drench containing a mixture of fatty acids, Mojave yucca, mono-propylene glycol and potassium chloride, is fed at 0.25ml twice daily (0.5ml/day) for the first 10 weeks.

Another plant-based product (oregano, cinnamon, anise, lauric acid) is mixed into the two milk feedings the calves get every day for 26 weeks at 1ml a calf a day.

Tetracyclines and pencillins are used when bacteria such as cryptosporidium and coccidiosis start affecting manure consistency and feed conversion rate.

Heating water cheaply to make warm calf milk replacer is vital to the system, explains Mr Bloemert, who has slashed water heating bills from €17 (£15) a calf to €4 (£3.57) a calf by installing a woodchip-biomass boiler.

The result is average growth rates of 1.06kg/day on its mostly Belgian blue, Piedmontese and Montbelliard-sired dairy-cross calves that come from hundreds of German dairy units.

Calves arrive at about 44kg due to government rules stipulating calves can’t leave their mother if they are under 40kg and have to have had two weeks of colostrum.

Focus on water cuts drug use

Antibiotics use has fallen from more than 10 daily dosage units to three to four units at the finishing unit of René Weijs since 2011.

A two-pronged approach to water quality is helping control disease with no increase in veterinary bills or loss of production.

Water lines are cleaned between batches with a product containing hydrogen peroxide and activated silver.

This helps keep young pigs’ intestines healthy and not loaded with the wrong type of bacteria when they are young and reduces biofilm in the waterlines where bacteria can develop.

Another solution is then added to the water containing a mixture of short chain fatty acids, copper and zinc to lower stomach pH to about 4, which is an antibacterial level for some pathogens.

Certain unwanted bacteria such as e coli, clostridia and salmonella are acidophobic.

Their development is thought to be inhibited by lowering pH.

Abattoir scores on livers and lungs are considerably better than the national average, with some scores at 5% compared with the Dutch average of 20%.

Wet-dry feeding achieves 850-900g of growth a day at 2.35kg of feed to 1kg of bodyweight gained, with boars finishing six to seven days before young females.

The farm’s health plan vaccinates against circovirus and oxytetracycline is the most often used antibiotics.

Acidifying water and upping vaccinations has cut antibiotics by 90% in weaners and 10% in the sow herd at the farm of Tiny Schepers, Neunen.

Vet bills have doubled since 2009, however, which is mostly due to increasing the number of piglet vaccinations.

A concerted effort has been made to avoid mixing litters to reduce stress and risk of disease transmission.

Cross-fostering on the second day of the piglet’s life has stopped.

Furthermore, sheds are now single purpose, while before gestating sows and weaners were kept in separate parts of the same shed.

This is reinforced by using Aquaclean to manage bacteria and biofilm in water lines.

Higher veterinary bills cover the cost of vet visits every three to four weeks as part.

Farms are rated on environment, water, ventilation and light out of 10.

Reducing antibiotics is an important achievement for Mr Schepers who has developed his own pork brand.