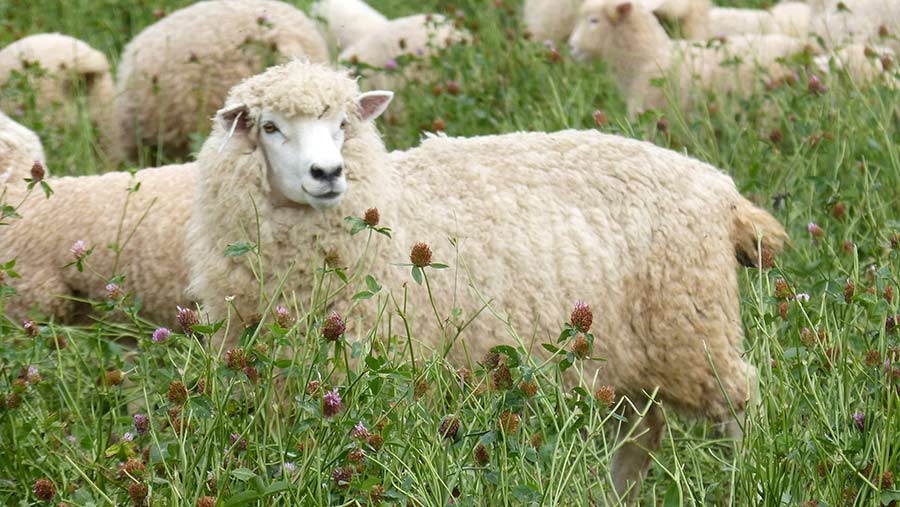 Close attention to ewe body condition score and a strict culling policy in a two-flock system has helped lift twinning rates 12% at a Wiltshire farm.

Stonehill Romneys – the stud livestock arm of Dineley Farming – near Swallowcliffe, Salisbury, has increased twinning rates from 45% to 67% in just five years.

Head shepherd Martyn Fletcher says twinning rate is critical because the 3,000-head New Zealand Romney flock is lambed outside in mid-April to match the grass growth curve and keep costs down.

Sheep must lamb unassisted and rear twins in a forage-only system. In this low-cost, commercial system, triplets bring extra cost and ewes with just one lamb yield a poor return.

“Some people are achieving 70% twinning with Romneys, which is what we are targeting” explains Mr Fletcher. “Twinning is one of our selection criteria, which is why we are demoting animals that don’t twin.”

See also: Pros and cons of indoor and outdoor lambing

What makes the lift in twinning rate more impressive is that it has been achieved while the flock size has doubled from 1,500-head to 3,000 ewes, with 1,000 ewe lambs and 100 ram lambs run on from which to select replacements or sell.

This is since Martyn Fletcher started farming alongside Sonja and Perin Dineley in 2015.

The farm has cut its arable acreage from 222ha to 181ha to enable the flock expansion.

Flock productivity is at 1.5 lambs per ewe tupped, with scanning at 160-170% and a post-lambing mortality of 9% this year.

“Outdoor lambing is about putting trust in your animals,” says Mr Dineley, who has lambed outside for 25 years. “It’s not what you do, it’s what you don’t do that matters.”

One of the first changes Mr Fletcher instigated was an EID system. This has helped increase twinning by simplifying record collecting and flock data analysis.

Lambs are EID tagged within 24 hours of birth. Breeding sheep are monitored closely and demoted or culled according to their ability to wean their weight, maintain condition unwormed and remain problem-free through their lives (see box).

Litter size is recorded through the EID system, allowing the team to see which animals are scanning and rearing twins.

A and B flock

Dineley Farming established an A and B flock, with the A flock being an elite flock of high-performing ewes managed by Mr Fletcher that produces breeding stock.

Meanwhile, the B flock is used as a commercial to produce prime lambs managed by Mr Dineley. Both flocks are 1,500-head strong.

Triplet-bearing ewes lamb together and are fed ad-lib soya. The smallest lambs are housed after they’ve had colostrum and raised on a milk machine, followed by cake.

A key part of lifting twinning rates has been close attention to ewe condition, which has been recorded to 0.5 of a condition score through the EID system.

Not being able to hold condition with 0.5 of a condition score 3 sees sheep drafted into the B flock or culled.

Ewes are condition scored at lambing, scanning, weaning and 10 weeks pre-tupping. They are then allocated ground according to condition and whether they are thin, fit or fat.

Rough permanent pasture and environmental grazing is used to control weight in fat sheep and the best silage ley aftermaths are given to the thinnest ewes.

Lambs get the best first year leys and are weaned onto herbal leys and red clover.

“Every year is different, and we have no hard and fast rules,” explains Mr Fletcher, who says good grass can add a condition score to a ewe in four-to-five weeks.

Any ewes that remain thin when sheep are being sorted into tupping groups are pulled out of the group and blood tested for iceberg diseases as a precaution.

Stubble turnips are grown each year to winter shearlings and ewe lambs and the farm is in its second year of growing fodder beet, which feeds the ewes from November until grass comes in late March/April.

The Dineleys see fodder beet as a ‘game changer’ because it can be such a high yielding crop, producing 19tDM/ha last year, compared to 3-6t achieved by turnips.

Milky ewes are essential because average twin birthweights have lifted slightly since fodder beet was added, with more lambs at 5kg as opposed to 4kg in previous years, explains Mr Fletcher.

This will be the first year the farm has used red clover silage as a supplementary protein source. Last year the Dineleys tried a 30% protein nut, but the ewes showed little interest in it as it was the first time they’d seen hard feed.

Sheep are scanned in late February and allocated fodder beet accordingly, with a daily allowance calculated according to mob sizes.

The shearlings are kept on turnips on three-day breaks with run-back to help avoid poaching.

Work is under way to design a lifting bucket for the front-end loader to offer fodder beets to ewes at grass to help them transition on and off beets.

The team believes that good forage, the right nutrition and body condition score accounts for 70% of the improvements.

Genetics and breeding may be a slow process but is still important, says Mr Fletcher. After five years, Dineley Farming believes that selection pressure on litter size has helped reduce triplets and seen twinning rate lift.