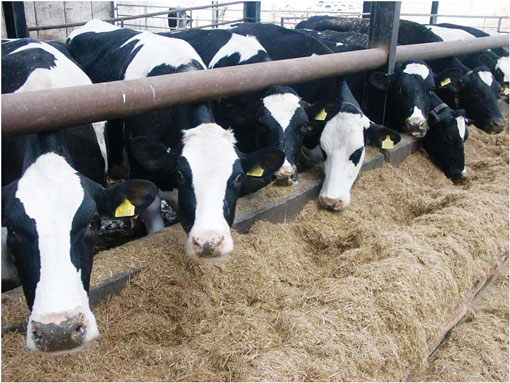 Robot milking systems are no different to any other dairy farming systems. They need a high proportion of fresh calved and high yielding cows in the herd to maximise performance, according to farmer Andrew Leggott.

He runs a herd of 330 cows through five milking robots at White House Farm near Northallerton.

“Low yielding cows don’t suit robots as they are less enthusiastic about making regular milking visits and tend to put on condition,” he says.

“When we installed the robots it became clear I needed to tighten overall management to drive output and get the most out of the system and the investment, especially as we were planning to expand the herd.

“We need cows up and running soon after calving, milking well and then getting back in calf quickly. With a calving interval of about 435 days when the first robot went in, fertility and dry cow management became key areas for attention.”

Working with his vet, Mark Glover of Kebir House Vets in Northallerton, Colin Lucas from Genus ABS, and Keith Colley from BOCM Pauls, a plan was developed to tackle these areas.

“We really focused on getting cows back in calf to break the vicious circle of cows with a long calving interval getting too fat and then proving harder to get back in calf again. As part of this, Mr Glover now visits weekly so pregnacy diagnoses are carried out sooner and problem cows are assessed quicker. He also keeps an eye on cow condition.”

The move to RMS has had a significant impact on fertility performance. In October, heat detection rate was 48% and the pregnancy rate was 14%.

Now heat detection rate is close to 74% and the pregnancy rate averages 24%, meaning there is a more consistent flow of fresh calved cows coming into the herd. This extra performance has been achieved at the same time as herd size has increased by more than 100 cows.

The other area of focus was dry cow management. Mr Leggot had tried shortened dry periods, but believes that on the current system, with yields averaging 10,000 litres, cows need a longer time dry. He now targets a seven to eight week dry period with everything having at least six weeks dry.

All cows are tubed and sealed when dried off. Feet are trimmed one month before drying off as Mr Leggot wants the hoof to be hardened off before the cow calves down again.

Mr Leggot runs two groups of dry cows – a far-off dry cow and a three week pre-calving group. Animals are moved between groups once a week. To help reduce stress at calving he hopes to keep cows in batches of 10 so they stay in the same group throughout the dry period.

“Moving animals between groups just once a week still means some cows that are very close to calving are exposed to the stress of animals moving into the pre-calving group at the worst possible time. Better grouping will greatly reduce this stress.”

The diet is kept fairly consistent across the dry period and is based on 17kg a day of the low yielder diet, with additional grass silage and straw. Cows in the transition group get 3kg of a transition roll.

Mr Leggot believes it is important to reduce the stress and problems associated with calving, if cows are to be active and moved back into the herd quickly. So he pays particular attention to getting cows rehydrated immediately post calving.

All cows and heifers are given an isotonic electrolyte supplement as soon as possible after calving to replace the fluids and electrolytes lost at calving.

All cows receive a bottle of calcium and anything that has had more than three calves also gets a calcium bolus.

While interest in electrolyte and appetite-stimulating supplements is increasing in the UK, use has traditionally been restricted to cows that have had difficult calvings and need an extra kickstart to get them going.

Dehydration is a significant issue in calving cows, potentially predisposing them to a range of problems.

A dehydrated cow will be listless, lethargic and reluctant to begin eating. In cases of severe dehydration, cows will not want to stand after calving and until she stands she definitely won’t eat, which leads to a downward spiral; in extreme cases this will result in downer cows.

This therefore delays the restoration of dry matter intakes and prolongs the extent, duration and impact on post-calving negative energy balance.

According to Andy Biggs of Vale Vets in Devon, nobody feels good if they are dehydrated and cows are no different. “We all know cows should drink after they calve but some don’t, so why not rehydrate your cows after they calve with a palatable energy, vitamins and calcium-rich solution, which most cows will drink voluntarily?

“Post-calving dehydration is due to a combination of two factors. The first is that cows will lose about 50 litres of fluids and salts when they calve, made up of blood and intra-uterine fluids. This is equivalent to five standard buckets or two and a half standard dairy chemicals drums. At the same time, cows reduce food and water intakes in the hours leading up to calving. With reduced intakes and increased losses, post-calving dehydration is likely.

“When a cow loses fluids and salts she needs to replace them and the immediate physiological response is to move fluids out of cells to balance concentrations in the blood. The sooner she is able to drink after calving, the sooner the balance is restored and the less has to be extracted from cells.

“Anyone who has watched a calving cow knows the considerable fluid loss but the intake factor is also significant. In addition to drinking, cows extract a lot of liquid from the diet. A 27% dry matter silage is, after all, 73% water.

“While all cows will be dehydrated at the end of calving, the problem can be worse in cows that suffer a prolonged calving as a result of stress and of course they will have had lower intakes for a longer period.

“It is normally not difficult to get cows to drink a lot in the two hours immediately post calving provided the drink is palatable, but it is important to make sure what they are drinking is the best replacement for lost fluids and this means supplying electrolytes.

“Water has no electrolytes in it and so won’t rehydrate cows as well as a product that supplies the necessary salts. The cost of a rehydration supplement is very low compared to the benefits that will result.”

Mr Biggs says rehydrated cows are more vigorous and will eat sooner, which can help reduce problems with milk fevers and other metabolic problems. Restoring feed intakes is vital to help cows settle into lactation.

He explains that getting cows eating and drinking quickly after calving can also reduce the risk of displaced abomasums and other metabolic related disorders, by reducing the inevitable energy gap by improving intakes.

The management focus has certainly delivered the results for Mr Leggott. Since installing the robots in 2007 the herd has increased from 160 to 330 cows with yields rising from 8,800 litres sold to 10,000 litres. Calving interval has been reduced by 50 days and post-calving problems have diminished.

“It is noticeable that the cows are enthusiastic about eating and appetite rebuilds quickly,” Mr Leggott comments. “Visits to the robot soon increase and it is a poor cow if she isn’t giving 50 litres, with many giving over 70 litres a day. Previously the top yields were about 60 litres.

“I see rehydration as a proactive measure that can nip problems in the bud, which gets cows performing better and is saving me the costs of treating problems reactively which is always more expensive.”