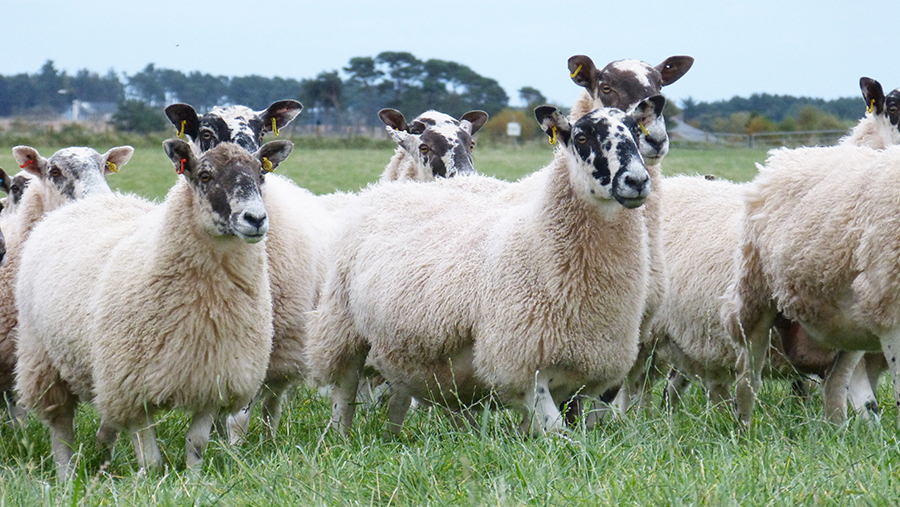 Addressing mineral deficiencies through a supplementation programme has saved a week on lamb feeding time and improved ewe lameness rates for a high-output Scotch Mule flock.

A copper bolus has been used for more than 30 years. Mr MacIver added a mineralised lamb feed and a ewe mineral bucket offered at grass.

Lambs are now hitting specification 5kg lighter than before and lameness in ewes has fallen from 5% to 0.83%.

And while he explains that sheep are not the main enterprise at Wester Coltfield, the added expense of supplementing is currently increasing flock productivity and keeping the sheep profitable.

“We have a silage analysis done most years to see what is missing in the feed for the stock,” explains Mr MacIver. “It was initially done to help get my autumn calving cows back in calf. The deficiency is typical of Morayshire farmland.”

Mr MacIver explains the flock’s role is to support farm cashflow in the summer when faced with fertiliser and chemical bills. The ewes also manage grass for his 160-head commercial Simmental herd.

A mineralised selenium and cobalt lamb finisher petter and a three-in-one feeder have both been used for the last three years to creep lambs from three weeks old ad-lib at £6 a head.

Now crossbred lambs hit a 20.5-22kg specification carcase at 40kg livewight, while previously lambs needed to be up to 45kg. This also saves on monthly lamb trace element drenches.

“This is worth at least a week – we get more lambs away that bit quicker,” explains Mr MacIver, who sells 80% of lambs by August to Dunbia on a deadweight contract.

Each year lambs receive a 2g copper bolus at worming (1 May) and ewes get a 4g copper bolus half way through pregnancy as an insurance policy and to stop swayback, which causes hind leg weakness, in lambs.

“Our copper levels aren’t helped by molybdenum and sulphur which are antagonists,” says Mr MacIver. “They lock up the copper that is there.”

Responding to depressed mineral intake has also led to investing in a Harbro ewe mineral bucket for the first time last year to help flock feet and fertility.

The buckets provide biotin and vitamin B to help hooves and hair repair as well as selenium, omega 3 fats and vitamin E, salt, choline, zinc and cobalt/vitamin B12.

The 23kg buckets (£23/bucket) were put out from May to January this year. Initially, buckets were put near troughs and gates to help intakes but this was not required.

“The sheep devoured them,” says Mr MacIver, who has stopped regular foot-bathing with formalin.

“I have used 10 so far this year, so while it is an added cost, it is the same as a ton of ewe nuts.

“We have never had a huge lameness problem here, but I would find foot rot in 12-14 ewes. Recently I have only seen it in two sheep. It has made the feet harder and has also reduced scald in lambs,” he adds.

“I have been buying shearlings from Fearn Farm for five years. I pay around £1,000 to £1,150. I like them, they have good longevity and aren’t fed for sale.”

Another benefit is increased ewe fertility from the minerals, with the key benefit being a tighter lambing period that finished two weeks earlier than usual.

Tups come out on 2 December and lambing usually starts on 1 March. There was no slow start this year and this followed ewes coming to the tup better and barren rate dropped from an average of 12-16 ewes to two.