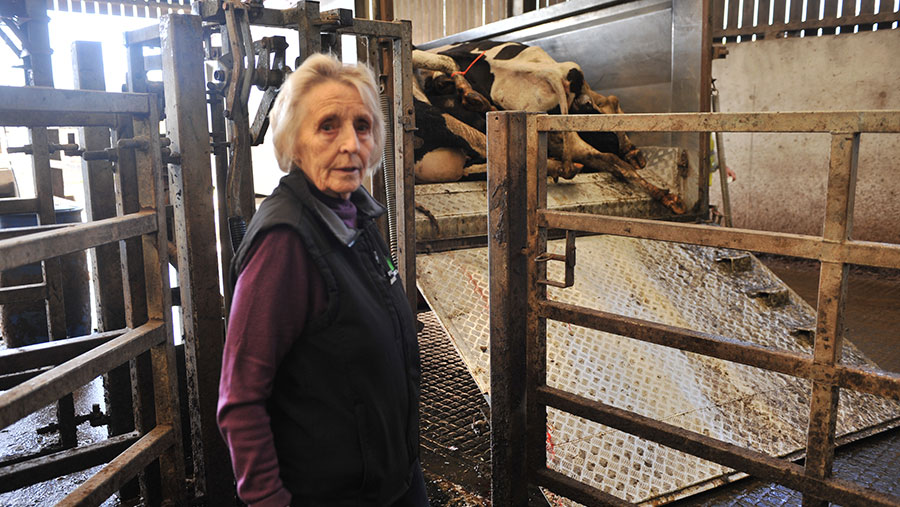 Mary Davies. Slaughtered cows can be seen in the background

A single gunshot rings out across the farmyard at Henllan Farm near Whitland, followed by a second, then a third. Eleven in total – a bullet for each of the in-calf, high-value Holsteins that are the latest casualties in a TB nightmare that began 15 years ago for the Davies family.

See also: How a beef enterprise has adapted to overcome TB

“All we hear around here these days is gunfire,” says 79-year-old Mary Davies, in tears as the last of the slaughtered cows is hauled into one of three lorries on the farmyard that day, her unborn calf still kicking inside her.

Fifty-one animals were taken from the farm the previous day and a further 11 had to be destroyed on-farm because they were heavily in-calf – one just two weeks short of her calving date.

The latest casualties included the last of their mature stock bulls and this has left them with a dilemma for breeding their heifers. “We have never artificially inseminated the heifers; we don’t quite know what we are going to do.”

As well as the emotional costs, the losses are a major blow to milk income. In January, the all-year-round calving herd was producing 18,000 litres. Today there is just 9,600 litres in the tank.

In 2010 the business invested £1.5m to upgrade the milking facilities, installing a 60-point rotary system. With diminished cow numbers, that parlour is making short work of milking time.

Another blow is the Welsh government’s decision to cap compensation payments at £5,000, from 1 October 2017. The Davies paid 18,000 guineas for their most expensive cow.

“Before 1 October we would receive their true value in compensation, which made the losses a little easier to bear. Putting a cap on their value is a financial disaster for us.”

But a Welsh government spokesman said the reason why the compensation cap had been created was to make the valuation system more financially sustainable.

He suggested that owners of high-value animals could insure animals worth over £5,000 to recoup those additional losses.

Badgers are suspected to be the source of problems. There is a high level of TB infection in the farm’s youngstock, which graze offlying land. “On that particular site we know there are a high number of badger setts. Whether they are infected I don’t know, but it could be relevant,” says Mrs Davies.

She says all the biosecurity measures advised by the Welsh government have been implemented, apart from erecting an electric fence around the farm. “Nothing would stop a badger walking up the drive, definitely not an electric fence, not that we have ever seen a badger in the yard.”

The Davies are also unconvinced by the accuracy of the testing system that has culminated in so many losses. “We are on severe interpretation, but the post mortem reports from the last two years have stated that none of the animals had visible lesions,” says Mr Davies.

In January, the Davies agreed to blood testing the whole herd. “We lost 10% of the herd after that test, 93 animals, but we thought it would help us go clear further down the line. We have lost dozens more since then. Why weren’t those picked up by that test?”

According to the Welsh government, it is a common misconception that a failure to identify lesions at post mortem means the animal had not been infected.

“It is highly likely the animal did have TB, but was in the early stages of infection and lesions had not yet developed,” said the spokesperson.

The gamma test is considered 90% sensitive – more sensitive than the TB skin test – detecting nine out of every 10 infected animals.