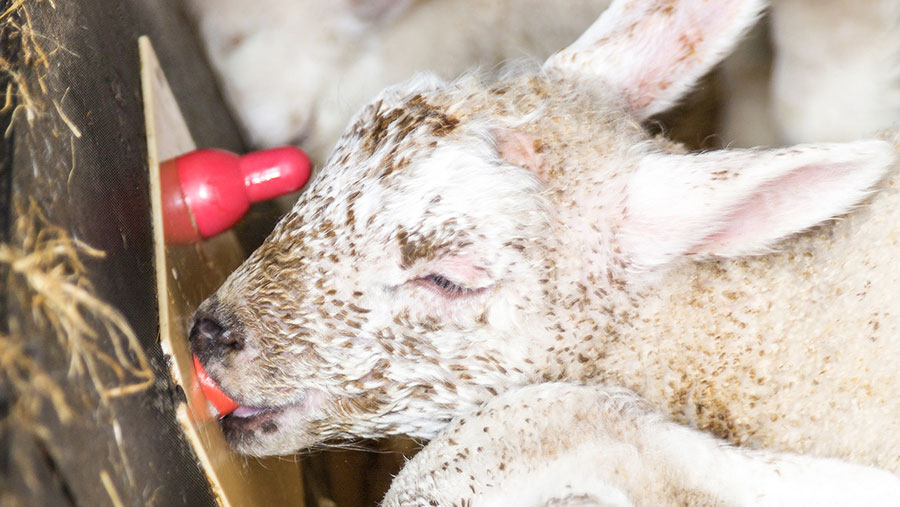 As many as 80% of UK farmers rearing surplus lambs artificially, fail to provide enough colostrum in the first 24 hours, a survey of 443 sheep producers has revealed.

Figures from a study during the 2018 lambing season found that while the majority of farms feed colostrum, they aren’t feeding as much as is necessary in the first day.

Farms are advised to feed a minimum of 210ml/kg liveweight in the first 24 hours, or 1 litre for a 5kg lamb.

This is according to Abi Eiran, technical officer at Volac, the company that ran the study, who said colostrum is needed to give essential levels of natural immunity.

“Colostrum is the key to survival for newborn lambs,” said Ms Eiran.

“It is a highly nutritious energy source that not only provides vital antibodies to protect against disease, but also gives the lamb energy to get up onto its feet and get going.

“The first few hours are key, as this is when the gut wall is at its most permeable, allowing the large antibody molecules to be absorbed.”

The worrying figures follow last year’s #ColostrumisGold campaign created by RUMA (Responsible Use of Medicines in Agriculture), which promotes colostrum provision to lambs, calves and piglets as a means of improving farm productivity and antimicrobial stewardship.

Speaking at the launch of the campaign a year ago sheep vet and consultant Fiona Lovatt explained that colostrum helps prevent infection.

She added: “Antibodies – essential in protecting against all disease including E coli infections – cannot cross through the placenta, so must be transferred through colostrum.

“While thin ewes or those that are not well fed in the run-up to lambing will produce too little colostrum of low quality, more often it’s simply not getting enough colostrum into the lamb quickly enough after birth.”