Concern is mounting in the Scottish sheep sector around a phenomenon severely limiting the economic performance and genetic progress of many upland flocks.

The perennial and unaccountable disappearance of lambs and sheep from Scottish hillsides, known locally as “black loss”, is age-old and has now almost reached almost mythical status. 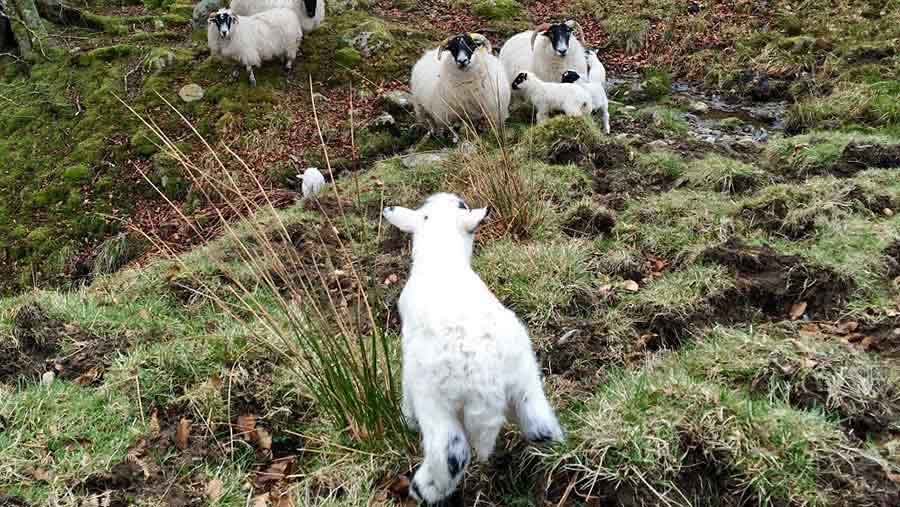 Despite technology and medicines to aid shepherds, hundreds of lambs still mysteriously vanish from hillsides every year. Black losses of 20% are frequently calculated and 50% are not uncommon.

This was the justification for an SRUC (Scotland’s Rural College) funding bid to begin to unravel the mystery by combining standard EID tags on college sheep to glean information on individual ewe performance and the use of radio-based mortality tags fitted to young lambs to alert staff to dying lambs.

Backed by farmers and crofters, the bid, however, was unsuccessful, with the Scottish government saying the proposal did not meet funding criteria.

In response, a government spokesperson said hill farming is a key activity in Scotland and that the government had recently announced a 24-point sheep sector action plan and distributes £65.5m in annual payments through the Less Favoured Areas support scheme.

Meanwhile, a bid for a PhD study to look into the impact of sea eagles, which gives some consideration to black loss, is still pending, with a result expected by early December.

This is according to Davy McCracken, professor of agricultural ecology and head of the SRUC’s Hill and Mountain Research Centre at Kirkton and Auchtertyre, Perthshire, who says black loss is a major issue in the Highlands and Islands.

“There are two periods of loss,” he explains. “Lambs first vanish inbetween scanning [February] and marking [May] and there is a secondary period, where a considerable number can vanish in the summer before the final autumn tally.”

Ahead of the funding bid he said the federation was very supportive of efforts to study lamb mortality on extensive sheep farms.

In 2013, results from a two-year Highlands and Island Sheep Health Association study of 5,063 lambs electronically tagged from birth confirmed an average of 18.8% annual black loss on four farms.

Realising the potential of EID tag readers for ewe and flock performance analysis would start to demystify losses on some commercial farms, explains Prof McCracken.

“By using standard EID tags more effectively we could focus on a certain group of sheep at a time,” he explains. “We can either look at gimmers, thin sheep, older sheep, sheep carrying twins and assess their performance at keeping a lamb”.

However, some flocks go unscanned or part-scanned, meaning limited conclusions can be drawn from marking and weaning information alone, he adds.

A novel aspect of the bid was the proposed use of mortality tags costing £30-£50/tag. Making them robust and watertight enough to cope with Scottish weather is difficult and costly, adds Prof McCracken.

“These tags assess two things – movement and temperature – so when an animal stops moving and gets cold the tags send out a radio signal and then we can get there in time to see if we can save it or at least assess what was ailing it.”

As many upland flocks are hefted, a shortfall in replacement females means productivity can fall due to a shrinking flock or lower production as older sheep are retained longer.

“Come September you can end with less of a pool from which to select your replacements, which we can’t buy into our hefted system” says Mrs McPherson.

“As hill farmers we can’t explain the number of lambs and sheep being lost and I would love to get to the bottom of it.”

She believes black loss is a hugely important subject to tackle that is effecting both lambs and older sheep, even when in good condition.

A total of 2,000 sheep manage about 4,000ha of hill at the MacPherson’s, grazing a home farm and a tenanted farm around Ben Lui on mostly poor grazing, with some sweet limestone ridges.

Land is steep and rainfall is high (3.3m/year, 130in), with some hill grazing restrictions meaning hills are stocked lighter for rare plants and sheep grazing up to and above 1,000m.

“Black loss is not the same as lamb mortality,” explains Mrs MacPherson. “It is specific to the extensive and harsh environments of upland farming.”

Black losses of 20% are commonplace and could mean a 1,000 head sheep flock having 650 lambs at the summer’s end instead of 850, says Stewart Christie, Auchlyne Farm, Killin, north Stirlingshire.

“This effects cashflow, profit and the selection pressure on your flock and seems to be a particular problem in Perthshire and Argyllshire,” he says.

“We just don’t know what is causing us to lose lambs and its an absence of evidence such as dead lambs that means we can’t undertake post mortems.” 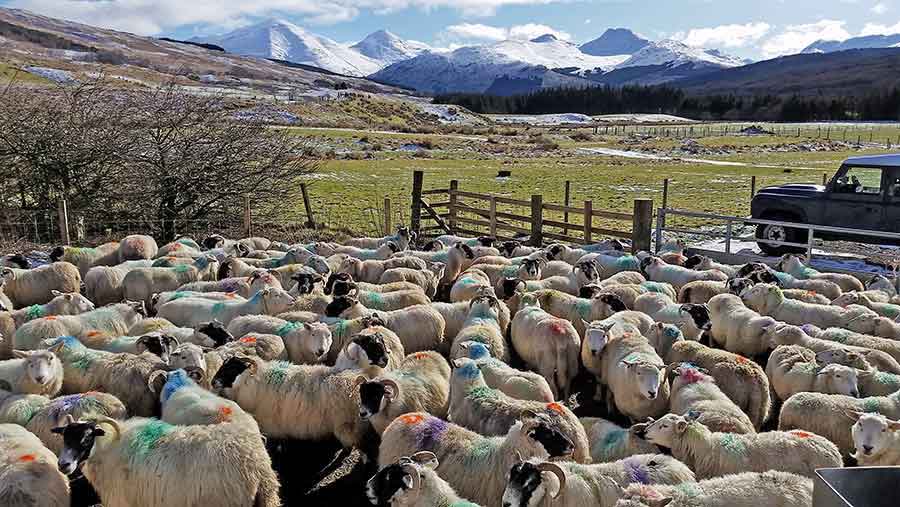 Auchlyne’s flock of 750 sheep graze 1,000ha of hill land rising to over 900m (3,000ft). No sheep are scanned as a lack of housing area limits the possibility of altering management for twins, explains Mr Christie, chairman on the Kirkton and Auchtertyre farm advisory committee.

Mr Christie says the reasons for disappearing stock probably vary from one area to the next, with sea eagles, foxes and badgers being blamed in some regions.

He also notes a recent trend for later springs and higher rainfall in his area.

“There’s also poisonous toxins on the bog asphodel plant which causing intense skin irritation and kidney damage and there are also large birds of prey. Its likely a combination of many factors together.”

Duncan Orr-Ewing, head of species and land management at RSPB Scotland, says the RSPB backs efforts to unravel the mysteries of black loss.

He acknowledged that sea eagles were spreading east from Mull and other parts of the west coast, where the species is “probably at carrying capacity”, but that breeding pairs had not got as far as eastern parts of Argyll, such as Dalmally.

“Lamb losses from sea eagles vary from site to site and some sea eagles won’t be taking lambs at all,” said Mr Orr-Ewing.

“Two studies [Mull and Gairloch] showed that sea eagles take small numbers of viable lambs and most lambs taken are either scavenged or non-viable that would have perished naturally.

“In central Scotland it is younger birds that are now being seen – they tend to wander widely before settling on territory.”

He said he had noted considerable support for studies and research into black loss and that a Sea Eagle Management Plan was being developed by NFU Scotland, the Scottish Crofting Federation and Scottish National Heritage, which had the issue of black loss firmly on the agenda. 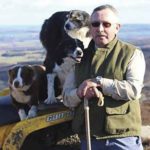 Peter Myles has noted a problem with black loss on farms in the Angus Glens.

“There aren’t sea eagles in our area but the issue is still here,” he says.

“Farmers really don’t like losing stock. In a normal year I scan at around 120% and I would ideally want to have that many to sell at the end of the year.”

Mr Myles farms up to about 2,000ft on in-bye land and has noticed a marked rise in crows, buzzards and kites in recent years, although he admits black loss remains an enigma.

“We’ve discussed with Signet whether there would be some way of looking at black losses on performance recording,” says Mr Myles, who started recording his 750 head Scottish Blackface flock 10 years ago.

“The losses have always been around in Scotland and it doesn’t seem to get better. A study looking into the matter could be very helpful.”