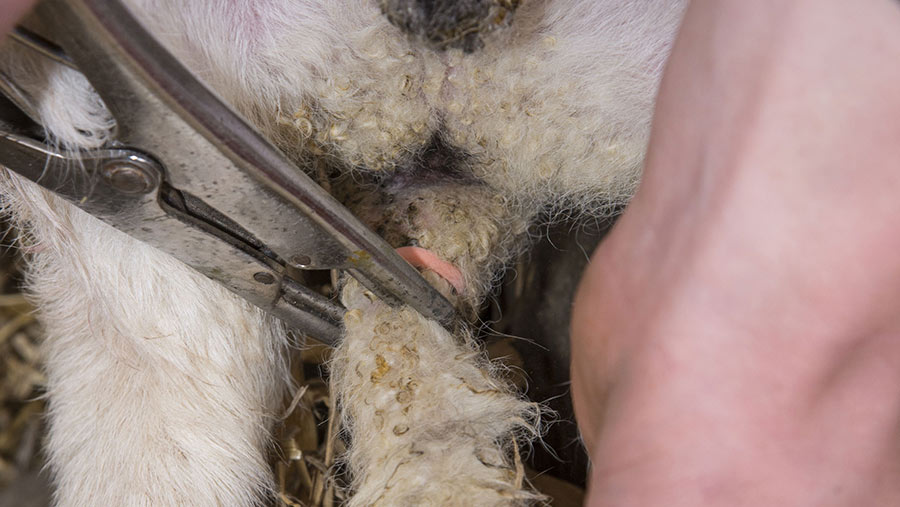 Tail docking is routinely carried out to avoid soiling of the fleece around a lamb’s rear and thus prevent fly strike – a painful condition where flies lay their eggs in the wool, resulting in maggots eating into the skin.

However, the process of tail docking itself is a stressful and painful one. Therefore, it is a procedure that could come under increasing consumer scrutiny due to animal welfare concerns.

Below, we weigh up the different methods of tail docking, review current legislation, consider whether or not farmers need to dock and look at best practice if you do.

Do I need to tail dock?

Because docking is a painful procedure, it should only be carried out when there is a substantial risk of fly strike, and in line with legislation, says vet Gethin Roberts, of George Farm Vets.

He also advises only docking after lambs are a day old. “I would want to avoid the first 24 hours because of the likelihood of disrupting the ability to suck.

“You could end up with failure of passive transfer of colostrum and also increase the mis-mothering risk,” he says.

Whatever method is used, lambs should be vaccinated against clostridial disease prior to lambing, as the procedure leaves a possible port of entry for bacteria.

It’s also advisable to castrate and tail dock at the same time to limit the stress of multiple handling.

What are the methods available?

The three legal methods of tail docking are:

What does the legislation say?

The legislation is not overly clear on the exact requirements for tail docking.

“When the method used is the application of a rubber ring or other device to constrict the flow of blood to the tail, the procedure may only be carried out on an animal aged not more than seven days. When any other method is used, an anaesthetic must be administered.”

The main messages that are applicable to all farmers, regardless of whether they are in an assurance scheme, are:

Lamb age and whether ewes are lambed indoors or outdoors are the main factors influencing docking method.

Ringing in the first week of life is likely to be attractive to indoor-lambing flocks.

In comparison, hill farmers – who tend to gather lambs for castration and docking at about four weeks old – are more likely to opt for hot irons.

Whatever age hot irons are used, to meet legal requirements, the procedure must be carried out with an anaesthetic.

The practicalities of giving an anaesthetic to older lambs out on a hill may be difficult, but with the consumer’s gaze well and truly on farming, not adhering to animal welfare requirements could do the industry serious harm.

Legislation might state anaesthetic is not needed when using rings on lambs under seven days old, but Mr Roberts believes the argument for using anaesthetic at this time is strong.

“Plenty of studies have shown it is a painful procedure. I would encourage farmers to use pain relief, whatever the age of tail docking,” he says.

He recommends that non-steroidal anti-inflammatory drugs (NSAIDs) are also administered at the same time as an anaesthetic when lambs are being docked from 24 hours onwards.

Although there are no NSAIDs licensed for use in sheep, their use can be permitted under veterinary guidance through the prescribing cascade, Mr Roberts explains.