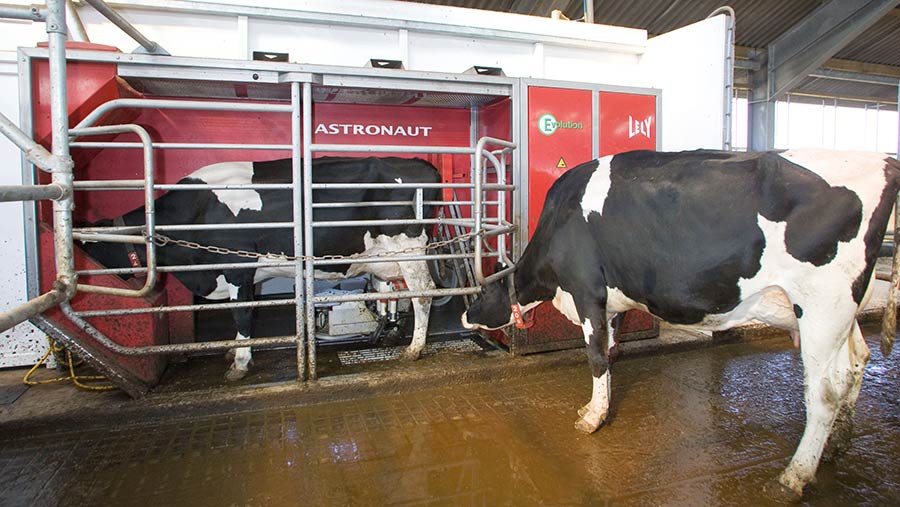 Automatically weighing cows when they enter the milking robot could provide a useful gauge of feed and dry cow management success, and also enable accurate dosing of medicines.

Weigh platforms can be added as an optional extra to certain manufacturer’s milking robots; either within the milking stall, or on the exit race.

The system will automatically weigh each cow at every visit to the robot, or at a pre-programmed interval.

The data can then be analysed at individual and group level (such as stage of lactation or parity) to identify weight change trends.

Weight may also be combined with other parameters to identify health problems. For example, a drop in production, rumination or body weight could trigger a health alert.

Below we take a look at how the weight information can be used.

Vet Ed Powell-Jackson of Synergy Farm Health believes weighing through the robots can be a useful way of monitoring the extent of herd negative energy balance (NEB) post calving.

Cows will always lose some weight in early lactation as energy demand for milk exceeds intake (NEB). However, excessive weight loss must be avoided to prevent fertility problems and immunosuppression, he says.

“In the first 40-50 days, there’s evidence the vast majority of high-yielding Holstein cows will lose weight, and the extent of that weight loss will have long-term repercussions; they take longer to come bulling and conceive and generally don’t do as well,” he explains.

Mr Powell-Jackson believes cows should not lose more than half of a body condition score – or about 5% of body weight – between calving and 60 days in milk.

He will never look at fresh cow weights in isolation, but combines them with blood biochemistry for ketones and non-esterified fatty acids (Nefas) to establish the extend of NEB. He will also look at body condition and the incidence of endometritis.

If excessive weight loss is seen across the herd, steps can be taken to assess factors influencing intakes, such as stocking rates and feed access, as well as ration make-up.

John Cook, global technical consultant for World Wide Sires, says if more than 15% of cows are losing over half a body condition score, or in excess of 8-10% of their body weight in the first 35 days post calving, it’s likely that cows are not achieving sufficient intakes pre-calving and dry cow feeding needs addressing.

Mr Powell-Jackson say weight data can often be “quite the eye opener” for farmers who have guessed cow body weight.

In his experience, Mr Powell-Jackson says farmers are usually out by about 50kg.

“Underdosing can encourage antibiotics resistance to develop, as you’re exposing bacteria to antibiotics without killing them,” he explains.

Tracking cow weight changes and production around peak yield can give an indication of whether the diet has been set up correctly to meet cow requirements, explains nutritionist Pete Davis of Crediton Milling.

He says cows can often perform well to 60 days (peak yield) and then drop back. This can correspond with a move from “lead feeding” (where cows are fed to push for peak yields) to “feeding to yield”, where cows may be challenged to produce more from forage, for example.

A drop in yield and weight should be used as a driver to make prompt ration changes, before any significant effect on fertility is realised.

Recording weights according to parity is a useful way of visualising the fact heifers are still growing. It also enables farmers to check that heifers are calving at the target weight for their age.

Mr Davis explains a heifer may calve in at 575kg, but have a mature body weight of 700kg.

It’s likely that she will only hit this mature weight in her third lactation, considering the fact she will lose weight every time she calves.

His 265-cow Holstein herd is milked through four Lely A4 robots, which automatically weigh every cow at every visit.

The weights of fresh cows – up to 30 days in milk – are looked at every other day to check they are not losing excessive weight in early lactation.

Any cow losing more than 10kg from her average during this period will be automatically flagged up on the computer so she can be assessed. 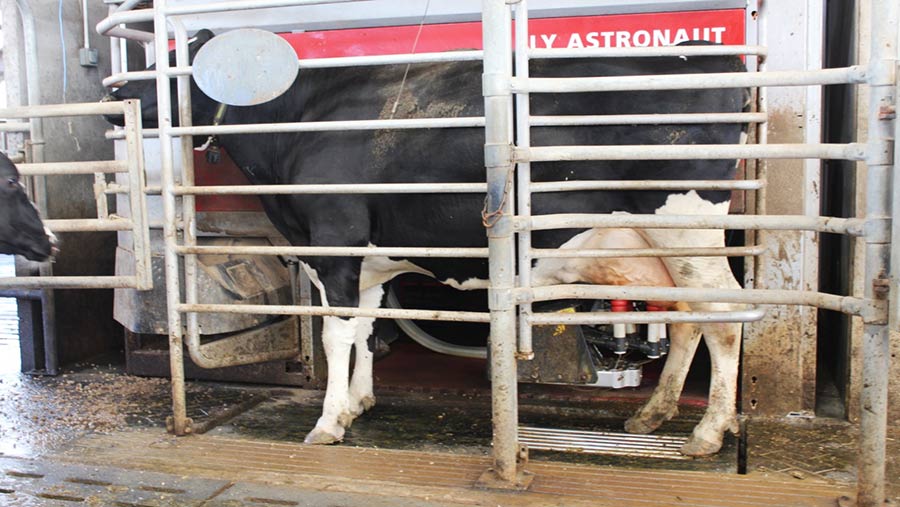 The weights of the milking heifer group and cow groups will also be assessed every 10 days to gauge feeding success.

Mr Williams has found cows tend to lose weight in the first 30 days post calving and then flatline, before gaining weight from about 40 days in milk. It’s this weight gain he views as crucial.

“Once they’re gaining weight, they’re OK to serve. If they’re losing weight at 40 days, it’s far more difficult for a cow to conceive.”

The fact cows are gaining weight suggests they’re in positive energy balance and more likely to get pregnant. Consequently, this is one area Mr Williams considers before serving cows – as well as ensuring cows are clean and cycling, for example.

He says weighing is “a tool to allow you to make the right decisions, at the right time.”

This is one of several factors that is no doubt affecting the herd’s fertility success, with calving interval standing at 375 days and a 100-day in-calf rate of 74%.

On the rare occasion a cow is not gaining weight by 40 days in milk, she will be closely assessed.

“Firstly, we would check to see if there is a problem with the feeding. If she wasn’t eating the cake she needs, we might tailor it so she’s in the robot for one minute longer,” he explains.