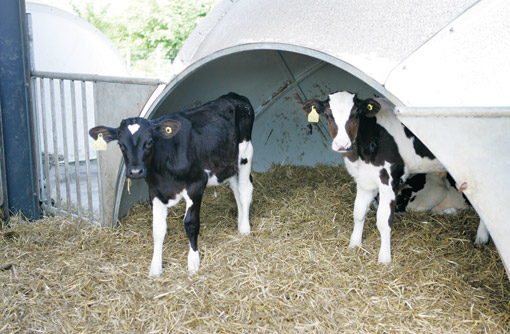 The calf igloo is a good example of how designing a housing system around the calf’s needs can bring substantial benefits in improved health and performance.

All too often, calves are housed in large, multi-purpose buildings where they struggle to maintain body temperature and drive ventilation.

In fact, ventilation expert Jamie Robertson of Aberdeen University believes many young milk fed calves are likely to be suffering with “cold chill” in the winter months.

And his suspicions have been confirmed as part of an undergraduate research project carried out at Aberdeen University.

The project looked at various calf rearing systems on farms across north east and south-west Scotland. Findings showed only the igloo created an environment warmer than the ambient temperature in winter.

“When positioned correctly and on a porous surface, igloos create a dry environment for the calf, as well as delivering fresh air,” says Dr Robertson.

He says the round design is the most efficient for ventilation, meaning air quality is more likely to be equal throughout. This means conditions are likely to be better, more of the time.

Dr Robertson says it’s important for producers to recognise why the igloo works, as the principles can be applied to other calf rearing systems to improve ventilation and general environment.

The small internal space means heat generated by the calves will cause air to rise up and out of the chimneys. Fresh air is then drawn in through the door in a phenomenon know as the stack effect. All too often calf houses are too large, meaning calves cannot generate enough heat to drive this air movement. Air inlet and outlet may also be insufficient.

The trial showed the igloo was the only structure able to create the stack effect during times of low natural air movement.

Emma and Jof Roberts of Uphampton Farm, Leominster, have invested in the calf igloo concept on their unit in Herefordshire, and also distribute the system within the UK.

The farm buys in 10-day-old bulls and heifers and rears them for 12 weeks. Mrs Roberts says because calves are sourced from a number of different farms, they are “pushing their luck” when it comes to stress and disease.

However, since moving calves from a dutch barn into igloos they have seen a 25% reduction in the number of calves that need to treated for pneumonia, along with improved growth rates.

Mrs Roberts recommends using the igloos with a building to get maximum benefit from them. “An open sided building or “lid” with the igloos arranged around the edge works best,” she says. This means calves are protected from the rain or sun if they don’t want to lie in the igloos and it also keeps farm staff dry.

This set-up also means pens coming off each igloo can be arranged to create an easy to use handling system. “We can arrange the gates so we can move and handle calves in their own environment,” explains Mrs Roberts. “It’s brilliant – it really reduces stress for everyone, which ultimately impacts on calf health.”

It is also possible to buy a specially designed calf veranda to cover each igloo. This is a mono-pitch roof on wheels which can be moved, allowing ease of cleaning while avoiding the need for planning permission.

“The roof is a 2.4 to 2.6m mono-pitch,” explains Mrs Roberts. “Because it’s low, we believe the stack effect will work better.” This means calves should be able to heat the smaller space and drive ventilation easier.

Mr Robertson says those producers who do not want to make big investments in the short-term and are housing calves in large volume buildings could use igloos in these existing sheds. “If you don’t change the system, calves will suffer,” he says. “I wouldn’t choose to put igloos in an existing building, but in the short-term this could help create a thermal environment in the winter and ventilation at calf level.”