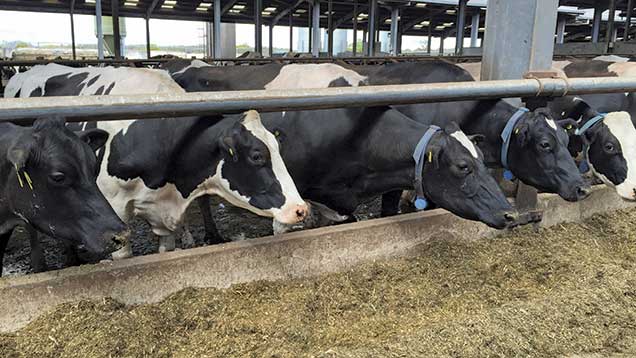 When Cheshire dairy farm Richard Fair consolidated his three dairy units and moved the herd to a bigger unit in Pulford 10 years ago, cows were bought in to expand the herd from 450 to 750, but this led to a wide variation in cow type and body condition, says Mr Fair, who farms in partnership with his nephew Peter Cope.

“We ended up with big ones, little ones and fat ones. But what you need on a unit this size is one consistent type of animal so management can be kept simple,” admits Mr Fair, who enlisted the help of independent nutritionist Hefin Richards of Profeed Nutrition.

As a result of cows getting fat in late lactation and the dry period, they were suffering with problems such as metritis and ketosis post-calving.

“The variation in body condition was probably the biggest issue.

“There were way too many cows with a body condition score above 3.5. When this happens, you can end up in a vicious circle where cows take a long time to rebreed.

“We wanted to try to break that cycle by reducing lactation length and improving cow management in the whole dry period.

“I felt that, in common with a lot of herds, there is a huge focus on the close-up cows and not much focus on the far-off ones.

“Problems accumulate in the far-off period because cows are just left to it and you are trying to put everything right in three weeks – you just can’t,” explains Mr Richards.

Dry cows used to be fed two different diets, but now they are fed one lower-energy ration to simplify management and better control body condition in the dry period.

“They were in the first dry cow group for two-thirds of the dry period and then they moved on to a different ration for the last two weeks,” explains Mr Fair.

Instead, dry cows are now run as one group and the straw inclusion has been increased and the energy of the ration has been lowered to 9ME.

“The dry cow ration is based mainly on chopped straw, which is chopped through a straw chopper to give a nice, short, consistent chop length. We use forages available at the time and a small amount of protein is added to the diet along with minerals (see ‘Dry cow ration’).

“Syrup is also included. This does a good job of sticking everything together and if the forage is particularly dry, we add water,” adds Mr Richards.

He says the aim is to give the cow sufficient – but not surplus – energy.

“If she is consuming too much energy pre-calving she will store it as fat and mobilise it too quickly post-calving, which can lead to ketosis,” he adds.

To further ease management heifers are run with the dry cow group upon their return from the rearing facility, six weeks pre-calving.

Key to running them as one group is integrating heifers early enough with cows pre-calving to reduce stress, says Mr Richards.

“There is a big argument for keeping heifers and cows separate at drying off. Many people try to introduce heifers too close to calving, but if you can get them into the dry cow group early enough, it is nowhere near as big an issue as if they are two weeks off calving,” he adds.

Housing plays an integral role in this. “The dry cows get the same standard of accommodation as the milkers – that is something many farms don’t have and should aim for.

“A heifer coming into this group can get away from trouble because there is plenty of room – that is probably the most important thing,” explains Mr Richards.

Dry cows are kept on sand cubicles to maximise comfort and hygiene and they have more than 600mm of feed space a head. They are moved to straw yards one day before they are due to calve.

Post-calving they are kept in small groups in one of three pens of seven sand cubicles for three days.

“On many farms the sick cows end up with the most vulnerable animals – the fresh cows. At this farm they are kept in small groups and they are easy to see to make sure everything is in order before they move into the main milking group.”

In order to bring body condition scores (BCS) back to 3, a late-lactation management group was set up.

“We formed the group initially and ran it for the first couple of years, but that group has since gone.”

Simplifying the management of dry cows and spending less time “firefighting” has freed up more time for staff to take proactive steps to ensure cows are in the correct condition at calving.

“They are also locomotion scored every quarter and a foot trimmer comes in once a week. As a result fewer than 10% of cows within the herd have a BCS of 2 and 3.

“If cows calve in fat they are also more likely to go lame because the fat cushion pads in the foot gets mobilised. The biggest thing, walking through the yard, is that body condition is now much more consistent,” says Mr Richards.

This has also been helped by having a breeding programme in place to get better breed consistency across the herd, with the herd becoming part of the World Wide Sires Mating programme eight years ago.

Sexed semen is used on the heifers and the cows are served with a maximum of two straws of conventional semen. If they fail to conceive after the second straw, they get served to Belgian Blue.

“To manage a herd this size, you have to make the system as simple as possible. So you must have one type of cow – that was our main objective. We wanted nothing too big, with capacity in both the gut and udder, and functional traits.”

Better body condition alongside stricter post-calving management has aided big improvements in fertility, with the herd’s calving interval falling from 415 days to 384 days.

“We have routine, weekly fertility checks with our vet Bill May, from Lambert Leonard and May, and we have set criteria before breeding,” explains Mr Fair.

Planning ahead and pre-empting problems to avoid big changes in rations has also been key to minimising cow stress and swings in yield, Mr Richards emphasises.

“The more inputs we know the cost of in advance, the better we can plan the business. It is about knowing what is coming up, so if we are going to run out of a particular silage, we can make changes smoothly,” adds Mr Fair.

“The moment you put a sheet on a pit of silage, you can work out how long it is going to last. Last Christmas we had three diet scenarios in case we ran out of syrup and we decided to prioritise the dry cows to keep their ration consistent.

“We try to do things gently so we don’t have to make changes overnight, switching forages over a couple of weeks,” says Mr Richards.

Improvements in the transition phase has led to fewer cases of metritis and significantly higher yields in the first 100 days of milking.

“Avoiding long lactations manages body condition – cows turn feed into milk rather than body condition. As a result, the percentage of cows in milk for more than 200 days is down from 43% to 34%.

Mr Fair plans on buying in a further 150 cows this year to take the herd up to 900 head, but he says health is his number-one priority.

“The most important aspect of running this farm is having healthy cows. Get that right and everything else will fall into place.”