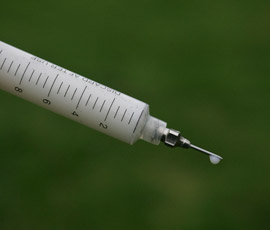 Most livestock farmers in the Republic of Ireland are planning to vaccinate against the Schmallenberg virus, according to a recent survey.

Out of 506 farmers questioned, 80% said they would be vaccinating their animals before breeding this year.

The work, conducted by Pat Bogue of Broadmore Research on behalf of MSD Animal Health, found one in six farms had been affected by the disease with up to one in four farms affected in the “high risk” southern counties.

Dairy farmers accounted for 40% of the survey participants with the remainder suckler and sheep producers. In the “high risk” areas where the disease had already occurred, half of farmers surveyed felt they were at greater risk of being infected with Schmallenberg in the next year.

Department of Agriculture figures show in May 2013 that 79 farms in Ireland tested positive for the virus.

Keep up to date with all the latest Schmallenberg news including advice about vaccination.