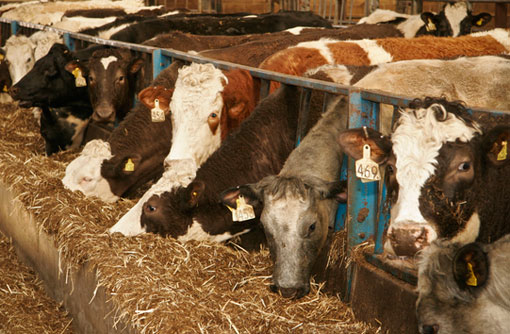 Mycotoxins are poisonous compounds produced naturally by moulds. Many people believe these highly toxic compounds are only associated with visible moulds, however mycotoxins can still be present where no mould is visible.

Similarly, just because mould can be seen doesn’t necessarily mean mycotoxins are present.

However, you can be sure moulds and mycotoxins are bad news for silage, comments Graeme Smith, Alltech UK’s ruminant sales manager.

“The main moulds of concern are aspergillus, fusarium and penicillium. These produce a wide range of mycotoxins that at best can reduce animal performance and at worst cause livestock disease.”

Lodging leads to the base of the sward dying and increased contamination with moulds that live on dead and decaying plant material such as penicillium.

Lodged crops are more difficult to cut cleanly without contamination so resulting in a higher level of dead material entering the silo.

This in turn increases the risk of poor aerobic stability at feed out and the mycotoxin load in the silage.

So, what can be done to counter this increased challenge? “Careful attention to every detail of the silage routine will help mitigate the mycotoxin challenge,” says Dr Davies.

“And good consolidation is the best way to reduce the growth of harmful yeasts and moulds in the silage clamp and to improve the aerobic stability at feed-out.”

Finally, when feeding silage, watch for signs of mycotoxin problems in the herd.

These include reduced intake and milk yields, reduced fertility and loose dung. Including a broad spectrum mycotoxin binder in feed should help to solve the problem.

“Avoid a binder that contains any traces of clay,” says Mr Smith, “These can lock up valuable trace elements and vitamins. An animal experiencing a mycotoxin challenge is already under huge biological stress without being denied valuable nutrients.

“Products containing clay are also ineffectual against penicillium borne mycotoxins and your money would be better spent elsewhere.”