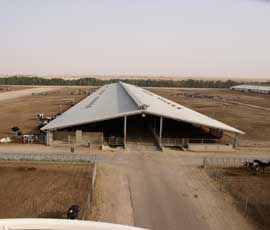 In an interview with the Guardian newspaper, Mr Kendall said the government should allow some farms to keep several thousand animals as part of a trial to help Britain feed its increasing population as food demand rises globally.

“The challenge of feeding everybody with the constraints of climate change and weather shocks is so great, we’ll need a complete rethink,” said Mr Kendall.

In the future, Mr Kendall envisaged more farms on the scale of the recent Foston or Powys proposals.

But he said much bigger units, such as the withdrawn 8,100-cow Nocton Dairies scheme, in Nocton Heath, Lincolnshire, could also be tried out.

“This is about a few experimental versions, so we can see whether it lowers greenhouse gas emissions, see whether it’s welfare friendly, see what the impacts are on the environment.”

Intensive units have proved profitable in the USA and continental Europe. The USA has several farms with 10,000 pigs and Saudi Arabia has a super dairy with a herd of 37,000.

But Mr Kendall argues that bigger farms are more profitable and can therefore afford better equipment, more space and experts able “to protect the environment and animals”.

In addition, farmers who run large units would be able to afford to employ vets and other experts such as nutritionists, and to attract other operations to local areas, such as ethanol plants generating high-quality protein waste that could be used as feed.

“I want to make sure we’re not importing food that’s produced to lower welfare standards and therefore driving our farmers out,” said Mr Kendall.