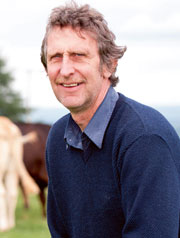 In my last article, I mentioned I was struggling to get hold of enough orf vaccine and, as a consequence, one batch of mule lambs have particularly bad orf. I suppose at least I now know vaccination is a worthwhile process.

Fortunately, my vets were able to source another supplier of vaccine, meaning that, along with spare bottles from friends and neighbours, I have been able to vaccinate a large percentage of the unaffected lambs.

The sheep are generally bloomy and shearing is looking closer than usual. Thankfully, demand for wool seems to be on the increase – the Campaign for Wool, with Prince Charles as patron, has certainly provided much needed publicity. My estimated wool cheque is well over double the previous year, edging closer to a more sensible price, with Bluefaced Leicester wool fetching a premium of £2.60 a kg.

Last week, I purchased a number of local Limousin x Friesian bulling heifers to be mated in July. It gets more difficult sourcing such quality cattle with the demise of smaller dairy herds.

All the cattle were out by the end of May apart from a couple of cows that were near calving. A week after turning out one old cow went down with staggers and didn’t recover leaving us with the rather tedious task of bottle feeding a young calf.

Anyway, I look forward to a possible day off at the North Sheep event in Hexham, Northumberland before clipping and silaging get under way.

More from John Bainbridge and the other Farmer Focus farmers