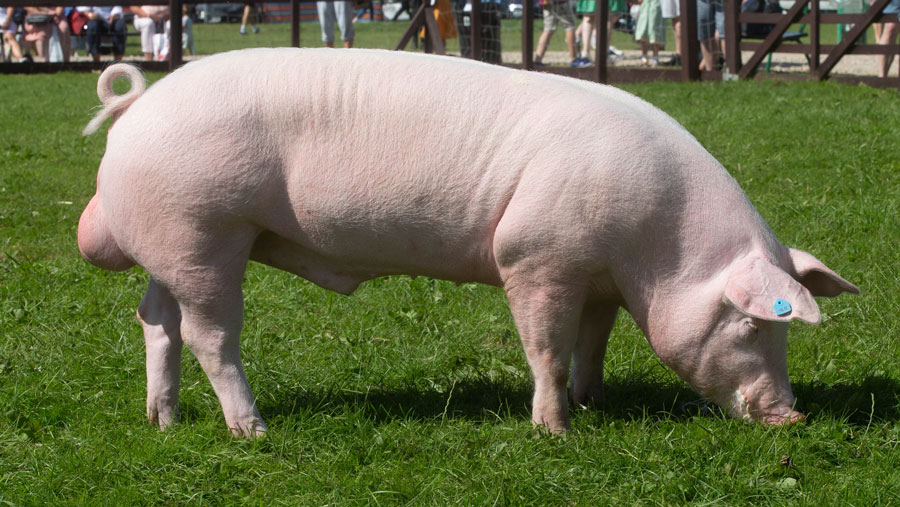 A young British Landrace boar was named supreme champion pig at the final day of the Great Yorkshire Show (13-16 July).

Derek, home-bred and born at the end of January this year, was made modern pig champion before taking the top accolade.

Mr Hudson, who keeps mainly Berkshires for his hog roast business, and only brought one Landrace to the show, was “pleased and a bit shocked” at his boar’s success.

His dam’s bloodline, Inga, and sire’s line, Dromus, are both rare, and he sees breeding Landraces as doing his bit to conserve the breed.

Even before he had gone in the ring for the final judging, Derek had caught the eye of a buyer from Lancashire. But Mr Hudson will keep at least one of his two litter sisters to breed from, and will use the same boar on his mother again to produce more potential winners.

Judge William Gregory, from Burn, near Selby, was full of praise for the winning boar. “Overall, he’s a fantastic young pig. I can’t find a lot of faults with him: he walks well, looks well, he’s a good top pig and has nice hams. He’s a lovely little boar, and what a Landrace should be like for the breed standard.”

In pig with her 10th litter, five-year-old Large Black sow Westerly Nocturne 18 won traditional breed champion and overall reserve champion. Beauty – as she is known – is owned by Bryan Card and kept at his son Andrew’s farm at Preston in Wiltshire. She was shown in the ring by neighbour Hayley Loveless.

Mr Card, also a judge at the Great Yorkshire Show, has bred 15 show winners and two supreme champions. Beauty is from the Nocturne line and was breed champion as a gilt at the Royal Bath and West Show and supreme champion at the Dorchester Show.

While Mr Card breeds Large Blacks – he has nine sows – his wife, Mary, has also been a successful pig breeder. Fondly known as “Mrs Middle White”, according to Mr Card, she has previously won supreme champion at the Great Yorkshire