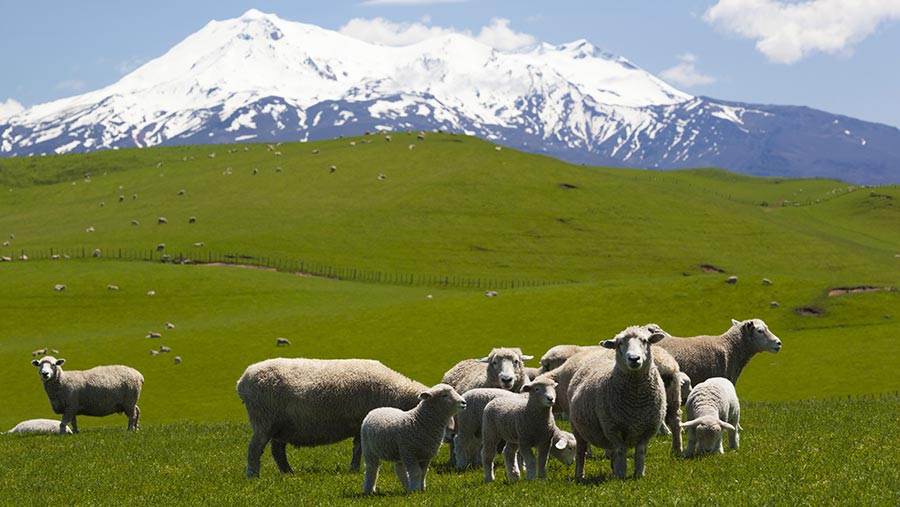 Murray Rohloff says while benefits will vary between farms, higher stocking rates, reduced concentrates and labour savings can boost returns by £20,000/year in a 1,000-ewe flock.

Mr Rohloff explains that NZ sheep farmers had been forced to re-evaluate their management after farm support was removed 35 years ago.

Since 1995, the NZ output of lamb per ewe has doubled. Half of this is due to better pasture management and half due to superior genetics utilising it for more production.

Those who thrived realised they had to grow more grass of a better quality through rotational grazing and use genetics that converted the grass efficiently, he says.

It is based on five principles

This will be reflected in increased profits of 50-70% compared with set-stocking, he believes. The booklet quotes Quality Meat Scotland (QMS) data showing the benefit of increased stocking rates enabled by the extra grass growth.

Taking the latest QMS data for upland flocks, the gross margins range from the average of £49 a head to the top third of £64 a head.

That means, in a 1,000-ewe flock, the extra margin from a further 200 ewes would amount to between £10,000 and £13,000.Alternatively letting out extra grass areas, freed up by tighter grazing, cand yield further income.

Most lambs grow at about 300g/day using the ewe’s milk, but growth rates collapse to less than 100g/day by weaning on set-stocking regimes. This is almost all due to deteriorating pasture quality, as grass digestibility falls rapidly once leaf age is over 25 days.

Well-managed rotational grazing keeps the grasses in a vegetative state much longer. Plants have more leaf area over a longer period to catch solar energy. It is a grazing system highly suited to the more erect and higher-digestibility grass species and promotes higher clover content, Mr Rohloff says.

Clover is highly digestible in all seasons and contributes nitrogen at 280kg/ha, helping to minimise input costs. The pasture quality boosts lamb growth rates and cuts days to slaughter, which is the main driver of profitability.

Better-quality grass growth, allowing a later lambing pattern to exploit it, can cut concentrate use. Mr Rohloff points to an upland farm in southern Scotland that adopted grass lambing, rotational grazing and grass wintering for its 800-ewe flock in 2017.

After subsidies were withdrawn in New Zealand, producers looked to ways of using more grazing to cut out expensive concentrate use.

Superior performers were found to be those that were able to compete in large mobs in close proximity to other sheep.

The traditionally sought-after box-shaped carcass was linked to animals that had poor mobility for grazing hill country, so this was also addressed.

Wedge-shaped bodies were quickly recognised as the ideal shape for easy birth and mobility.

The widest part of the wedge, the pelvic aperture, contributes 60% of ease of birth, with lamb head size and width, lamb neck length and thickness of leg bones much of the rest, Mr Rohloff explains.

And the fertility and mating drive to cover more than 100 ewes a season, with more than 90% of ewes holding to the first cycle, was a further target.

Just over half of NZ’s sheep flocks are no longer shepherded at lambing because of steep and inaccessible terrain. This also includes many hoggs lambing on steep hill country.

By 2019, only one labour unit was needed for 3,850 sheep, as genetics slashed the labour requirement. A fast birthing process proved to be the key for unaided lamb survival.

If lambs can get their first feed themselves within 20 minutes, chances of survival are greater than mortality, Mr Rohloff says.

Over the three decades rams have been selected on the ability to thrive on pasture-only diets, daughter fertility and fecundity which has led to NZ-bred rams capable of settling 150+ ewes s year.

Longevity is also a key to cutting ram costs, with NZ rams expected to work for a minimum of four years, with some extending to nine years and beyond.