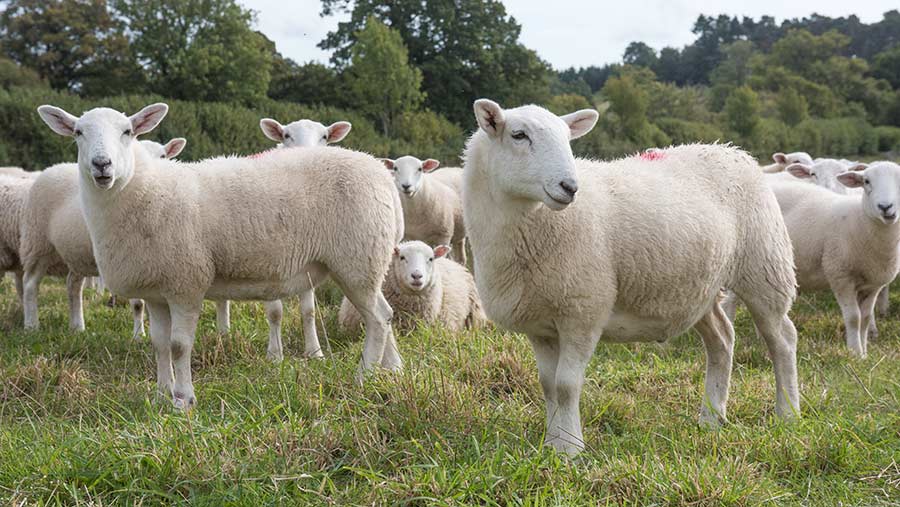 As a new entrant into farming, rough, unimproved grazing was all James Edwards could get, so he knew he had to opt for a low-input sheep breed that would thrive on poorer ground.

At 6ft 3in and with persistent back pain, he was also keen to avoid shearing, while limited labour input also appealed.

After researching breeds online, he came across the Exlana – a wool-shedding sheep, predominately known for its maternal traits.

Mr Edwards arranged a visit to Wiltshire -based breeder Tim White, and was struck by the amount of recording carried out within the breed and also how the sheep looked.

“I was immediately impressed. They were very smart and running on a steep High Level Stewardship bank, full of old, long grass. They were in fantastic condition.”

In 2014, Mr Edwards invested in 40 ewes to run on 12ha of rented ground in Wales, and gradually built up numbers and land area. Having then been offered a job in Berkshire, he moved the flock with him. 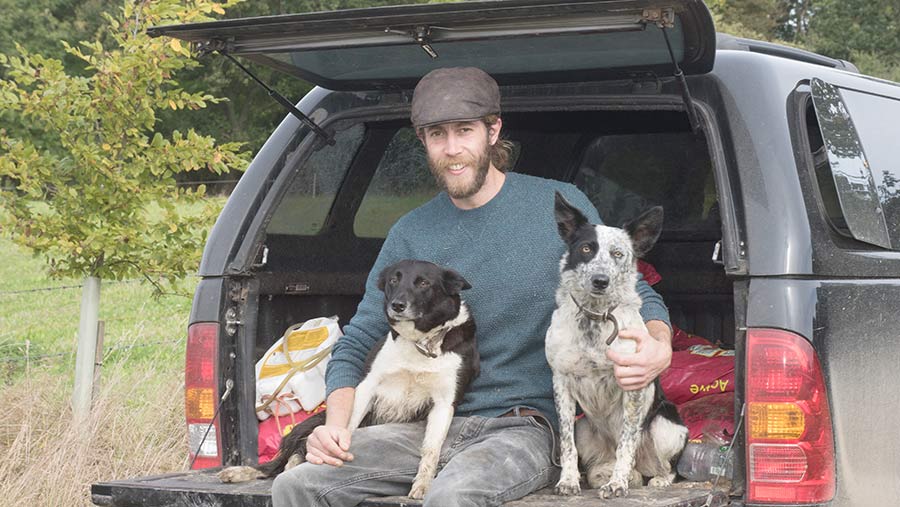 Today, Mr Edwards runs 1,200 Exlana, with an “A” flock kept pure and used to produce replacements, and a “B” flock put to a terminal sire.

He also contract manages 2,000 Easycare and Mule ewes. This has enabled him to make comparisons between breeds and note five key benefits with the Exlana:

1. Thrive on a low-input forage system

All lambs are finished on forage, while ewes are managed on rough permanent pasture and achieve a scanning percentage of 160-170% in the “A” flock.

“I’ve never creeped a lamb or fed ewes cake – other than the odd sick one,” says Mr Edwards.

All ewes lamb in April/May on a mix of rough parkland, HLS, water meadows and organic ground.

“That’s what they have to carry lambs on, until I wean at the end of August,” he explains.

At weaning, lambs go onto horse haylage aftermaths until they are moved onto arable cover crops for finishing.

Mr Edwards keeps lambs until October/November, and finishes them off arable crops when lamb prices are better in December to February.

At a cost of 30p a head a week for oats and vetch, and 40p on turnips, keeping them overwinter on cover crops is a cheap exercise.

Mr Edwards believes lamb weights from both maternal and terminal-sired Exlana are more consistent compared with other breeds, while input costs and losses are lower.

He also thinks there is a gap closing between pure maternal Exlana lambs and those crossed with a terminal sire, which means he is considering keeping all Exlana pure in the future.

This has partly been due to Mr Edwards placing more emphasis on selecting carcass traits when purchasing Exlana rams.

Mr Edwards chooses rams in the top 5% for maternal characteristics like litter size reared, as well as scanning and weaning weight. Although a maternal breed, Exlana breeders have been placing more emphasis on carcass traits in recent years.

“Wether lambs are getting better year on year – meatier and better shape to them – that’s why I’m looking to move to all Exlana.”

Pure Exlana lambs achieve an average £80-£90 a head after being finished on forage. A smaller, 58kg Exlana ewe means more ewes can be carried (five ewes/0.4ha).

During lambing time, a team of three staff lamb 3,000 ewes outside across three sites.

This includes a student who mans a shed used for problem ewes and lambs. Around 5% of the Mules and Easycares end up here, compared to 2% of the Exlana.

Mr Edwards also believes less intervention is needed when he checks Exlana ewes in the field.

The wool shedding attributes of the Exlana means pure lambs often require one or no preventative treatment for fly strike. The crossbred Exlana do not shed completely, so they do require twice yearly treatments.

In addition, ewes do not require fly strike treatment. At about £190/bottle, Mr Edwards roughly calculates this could be saving around £1,000/1,000 ewes in treatment alone.

Improved worm resistance has been one of the main benefits of moving to an Exlana ewe. Since 2012, Exlana breeders have been selecting for resistance and have developed a worm resistance EBV for the breed.

Mr Edwards finds it difficult to rest pastures so he began selecting Exlana rams with estimated breeding values in the top 5% for worm resistance two years ago.

He now uses about 50% less wormer on the Exlana lambs in a normal year, versus the other breeds. All breeds are wormed based on faecal egg counts. “A lot of Exlana lambs will never have been drenched,” he adds.

The wool shedding attributes of the Exlana removes the need for shearing, which lowers cost. They shed from March to June.

“It’s not just about the cost of shearing, but gathering them, holding them, pushing up, folding wool and lambs losing growth when they’re brought in,” adds Mr Edwards.

In comparison, the Mules need to be sheared pre-lambing to avoid ewe losses due to getting cast.

Only one Exlana got cast last year. Pure Exlana lambs also don’t get dag problems so they don’t need their tails ringed.