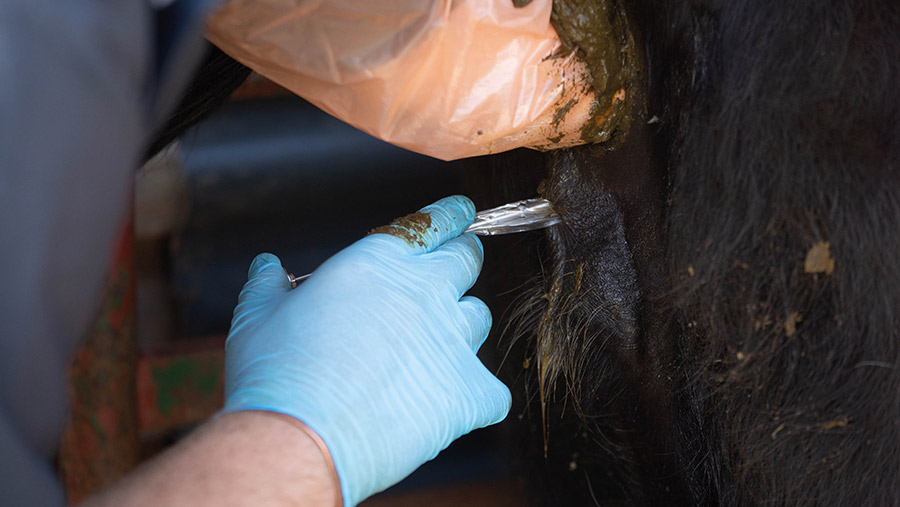 The fertility of maiden heifers can be a large profit driver. The rearing costs of youngstock are often undercalculated and when feed, bedding, housing and labour are all accounted for can be in excess of £3 a day.

Extra days open are nothing but an additional expense that should be minimised. Therefore, meeting weight targets, breeding heifers quickly and getting them to conceive when bred is important.

When heifers hit your target breeding weight and age, breed them as quickly as possible. There are lots of different options for heat detection aids.

Paint or scratch cards seem to be the most useful for block-calving herds, but activity monitors are extremely successful – both for picking up heats but also artificial insemination (AI) timing.

2. Make sure heifers are well grown

Once heat detection is good, focus on maximising conception rates.

Heifers must be well grown. Set weight targets and stick to them. Weigh at strategic points where you can utilise the data and make changes if necessary, for example birth, weaning and pre-bulling.

The pre-bulling weight is important to work out exactly when to breed the animal, preventing you from inseminating too light or wasting days by breeding too late.

Weight at breeding should be 60% of your farm’s mature cow body weight (the average third calver at approximately 150 days in milk). Anything less will result in poorer conception rates or heifers calving too light or becoming too fat, if the animal does fall pregnant.

This means you must have higher growth rates during pregnancy to catch up, when heifers are more programmed to gain fat and not skeletal growth.

Weight at first calving should be 85% of the mature cow weight; anything less will cause milk yield loss as the heifer continues to grow, instead of producing.

3. Get the ration right

For higher conception rates, the maiden heifer ration is extremely important. It should be consistent from around nine months and maintained until heifers are two months pregnant.

Ideally, rations should be made up of dry forages such as a well-made grass silage, maize, wholecrop or straw. Wet forages or diet changes seem to affect follicle quality and are almost always followed by periods of decreased conception rates.

AI timing is crucial. Stick to the old-age rule and inseminate 12 hours after the onset of standing oestrus (bulling signs), especially with sexed semen.

More than adequate results can be achieved by only breeding once a day, and I prefer to be “early” than late.

If you only inseminate once a day and heifers are showing activity, then I recommend inseminating at that point, rather than waiting 24 hours, as semen must be present at ovulation.

5. Use the right sync protocols

Sync or timed AI (TAI) protocols can be very successful. Due to most heifers having a three follicular wave cycle – unlike mature cows which have two follicular waves per cycle – avoid forms of an Ovsynch protocol without a progesterone-releasing device. It is not designed for maiden heifers.

There are two common options used: a five day or a seven day (the time the CIDR is left in). I’ve used large numbers of bot and seen very little difference.

I prefer the seven-day option as it seems less likely to get the days of injections wrong and is easier to avoid handlings at the weekend, which can aid compliance.

Each protocol can be modified further by using either two or four injections. If using the five-day protocol, expect approximately 5% higher conception rates when using four injections.

You can dramatically improve success rate, despite it being a “timed AI” programme, if you can heat detect on days eight and nine.

This is because a high percentage of animals will show heat on day eight, often 24-36 hours before timed AI, and if these are left, they are often inseminated too late.

Any form of heat detection – such as chalk or stickers – to flag up heifers that may be bulling early can be beneficial, especially when sexed semen is being used.

Alternatively, AI twice at 48 hours and again at 72 hours. When TAI protocols are done right, there is no reason not to expect conception rates similar to natural heats.

AI technique is often overlooked. There is a large variation in conception rates by technicians. Farms that have multiple people who AI should monitor and address when differences are seen.

Carrying out AI on 13- to 14-month-old heifers isn’t easy. The difference between not having the gun completely through the cervix and too far up one horn can be as little as a couple of centimetres.

Making sure heifers are well-restrained and only thaw one straw at a time, especially if using sexed semen. It gives your hand a break in-between AI, and prevents rushing if the first heifer is difficult and you’re conscious you’ve another straw down your back.

Finally, keep everything as clean as possible and consider using a chemise. Technique can be the difference of as much as 5%-plus conception rate points.