It’s hard to believe that Norfolk farmers Philip and Laura Vincent were newcomers to beef breeding when they set up their pedigree Pulham herd – as in a very short time theirs has become one of the highest-ranked herds in the breed. 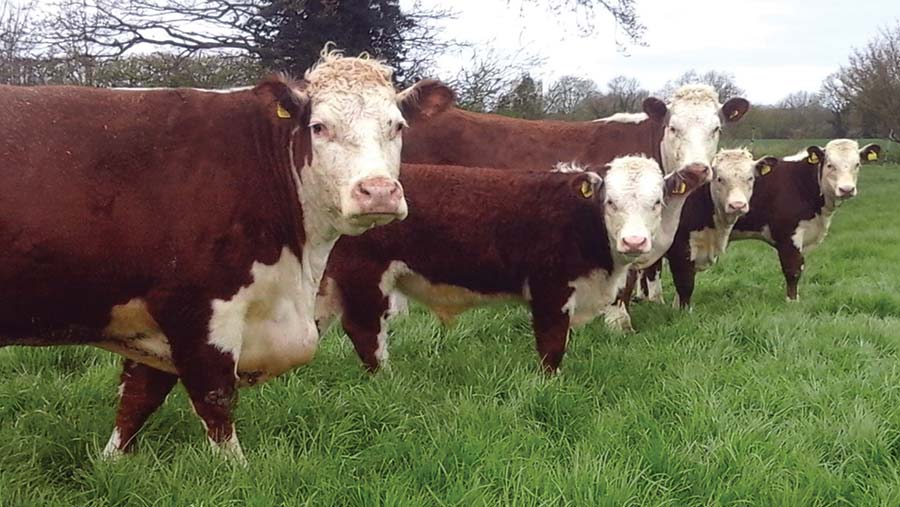 Farm revenue comes largely from the family’s chicken egg business, which Mr Vincent set up in 2003 on his return from agricultural college in Lincolnshire.

Four years later, they set up the Hereford herd, filling the void left by a pig-rearing operation, which the family got out of over fears salmonella could spread across the yard to their chicken units.

“Our income was mainly from the poultry, so we had to make a decision on what to do with the pigs,” he says. “We expanded the poultry and got rid of the pigs, which gave us a shed to put some cattle in. That’s where the Herefords started, in the old pig shed.”

With no cattle experience between them, the Vincents chose the Hereford breed for its docility and ease of calving.

“Somebody rented the land around the chicken sheds from us and they had a commercial herd – and within that they had some Herefords. We had seen that they were quiet, knew they were easy to manage, they were native, and fed on grass,” says Mrs Vincent.

“And easy-calving because we didn’t have the experience,” Mr Vincent adds. “Rather than a continental, which might be slightly more difficult to calve, the Hereford seemed like a perfect choice for us.”

Eight years on, the herd has grown to 35 horned and polled Hereford cows, about 40% of which are ranked among the top 10% of the national Hereford herd for terminal index EBV.

They also secured the 2015 Horned Bull of the Year title, which is awarded to the animal that has gained the most number of points from a maximum of five qualifying events during the show season.

The Vincents, who don’t buy cattle at market, attribute the success of the herd partly to their early buying decisions. 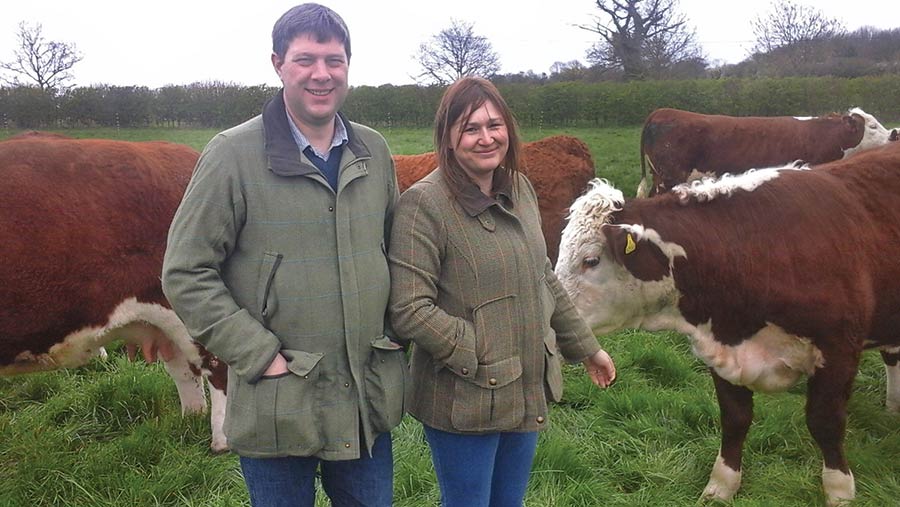 “We were very selective about the animals that we purchased,” says Mrs Vincent.

Using a selection of Hereford breed journals, they began their search for cattle to establish their herd’s foundations.

They stumbled upon an article by Colin Clarke, the now-retired farm manager of the Badlingham herd, which Mrs Vincent considers to have “one of the best-known female lines in horned breeding”.

At the time the Vincents were getting into Herefords, the Badlingham herd was owned by AG Wright & Sons, with Robert Clarke, Colin’s son, as the stockman. “We went there and picked four females – that’s where it all started, that’s where our interest took off,” Mrs Vincent says. “We were very keen to purchase Blossoms [bloodlines], and we managed to purchase one in the original four.”

When an opportunity to purchase another Blossom from the Badlingham herd arose, they jumped at the chance.

“Robert sold us Blossom 142, and she has been our best animal,” she says. “Looking back, that one female has had a very profound effect on the herd.”

The Vincents “use EBVs as a tool” when adding cows to the herd, but ultimately base any decision on the bloodline and maternal traits of an animal.

“If we go somewhere to look at an animal, we have already been on the Breedplan database. It’s not just about going, looking at it and liking the look of it. It’s about looking into the animal’s breeding history and what that line has done,” she adds.

When adding females to the herd, the Vincents also take into account:

With bulls, EBVs are taken into account to a greater extent at the point of purchase.

“When you are putting an animal across the whole of your herd, you don’t want it to have any big faults because they are going to get through your herd,” says Mr Vincent, adding that length is a characteristic they are currently hoping to improve in the herd. 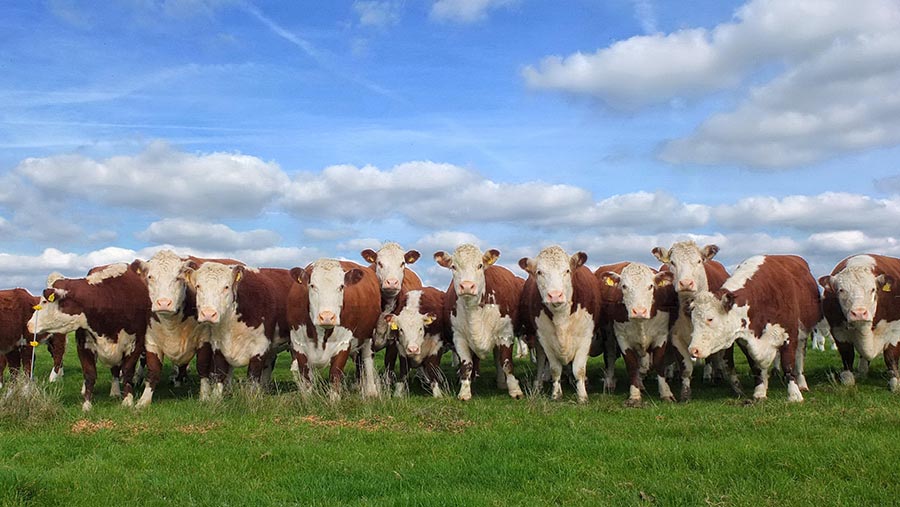 The Vincents calve in autumn (September, October and November) and spring (January, February and March).

Heifers are at first calved at 30 months, with the best females – about 10 of the 35-strong herd – AI’d, often using semen with an Australian influence, in the hope of producing something unique.

“One of those calves turned out really well last year and we sold it at nine months for a considerable amount of money,” says Mr Vincent, adding that conception rates among AI’d cows vary from 30% to as high as 60%.

The rest of the herd are put to one of the Vincents’ three stock Hereford bulls.

Those selected for AI that don’t hold are put to the bull three weeks later. Conception is achieved “99%, if not 100% of the time, if we put the bull in”, says Mr Vincent.

Cattle are turned out in late April and stay out until November or early December.

While indoors, cows subsist on a diet of bale silage, supplemented with minerals. Meanwhile, youngstock are fed a coarse mix of wheat, barley, oats and minerals “to keep them moving on”.

Cows calve indoors and calves are weaned at 8-10 months.

Bulls are scanned for eye muscle and fat. They are kept intact until their 200-day weight has been recorded, with the best kept or sold. The rest are usually finished at 13-15 months as bulls, or castrated and finished as steers at 18-20 months and tend to grade R4L.

The Vincents select based on female lines, growth and conformation – keeping the best for themselves and selling the rest as breeding females “as long as they are good enough”.

“On the female side, we tend to select on female lines and how well they have grown and on their conformation,” says Mr Vincent.

“Everything has our name on it, so it’s no good selling something that’s not good enough. So we select the best animals to sell or keep and finish everything else.”

They sell up to four animals boxed each year; the rest go direct to the abattoir.

While farm revenue still largely comes from the chicken business, income from the sale of cows and bulls is increasing.

“In the financial year that has just finished we sold about £50,000-worth of cattle, which to us is really good. Every year, we are moving up, selling more and more, which is good because it shows we are promoting well and getting more and more of a name.”

“If we didn’t have the cattle, we would probably have to cut it for silage.”

“It also helps to draw the chickens out of the shed to range,” he adds.