Clinging on to the top spot for a third genetic evaluation is Genosource Captain. Captain provides a resounding endorsement of the genomic testing system, in particular through his sire, Hurtgenlea Richard Charl, which graduates on to the proven sire list as the new number one bull with milking daughters (see proven ranking below). 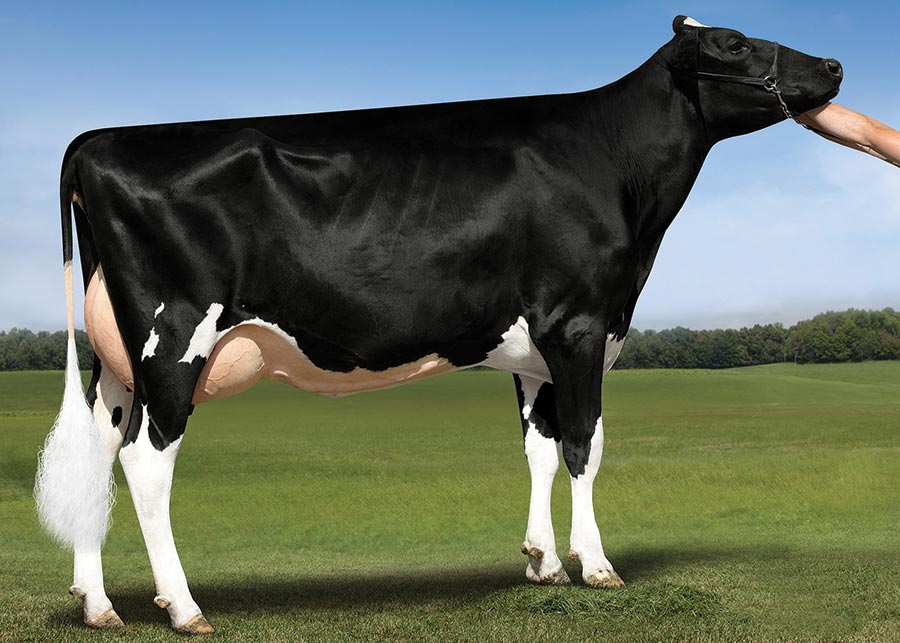 Captain himself rises on profitable lifetime index (PLI) to £963, transmitting high milk volume (predicted transmitting ability – PTA – for milk is 1,095kg), good milk solids (+0.14% fat and +0.04% protein) and favourable maintenance costs at -16. He also scores -3 on the newly introduced gestation length (GL) index, indicating that his calves will, on average, have a shorter gestation than the national average by three days.

New in fourth position is Progenesis Mahomes (Eldorado cross Milktime), with a PLI of £892. Good udder health indexes including -21 somatic cell count (SCC), together with solid lifespan (+159 days more than average) and daughter fertility index  (10.2), yield him the joint highest HealthyCow (HC) score in the top 20, at £283. HC rolls all daughter health traits into one figure. Mahomes also has the highest type merit in the top 20 at 2.04.

A high new entrant of UK breeding is Boghill Glamour Applaud (PLI £875). With one of the breed’s highest HC scores (£274), this bull has outstanding credentials for the important health traits, such as lifespan (+189 days), fertility index (12.1), SCC (-19) and lameness advantage (1.5).

The high milk volume Siemers Brave maintains a top 10 position with a PLI of £873, while eighth-ranking Bomaz Platt is another new entrant. An outstanding milk quality transmitter (+0.39% fat, +0.15% protein) with the best daughter fertility in the top 20 (fertility index 13.3) and a favourable TB advantage (2.9), he weighs in with a PLI of £865.

At PLI £864 is ninth-ranking Gen Pikachu, another son of Charl, and the highest milk volume bull in the ranking, at 1,301kg.

A brand-new number one bull headlines the daughter-proven Holstein sire list. Hurtgenlea Richard Charl not only graduates from the genomic list with flying colours, he also leaves his son, Genosource Captain, in number one position among the young sires.

Charl himself is an early DG Charley son from a Yoder dam, and combines high milk yields (his PTA for milk is 1,162kg) with favourable maintenance feed costs (-15) and a type merit of 1.61. His PLI is £774.

Westcoast Yamaska (PLI £720) is now in sixth position and transmits favourable milk solids (+0.21% fat, +0.15% protein) and a good fertility index (9.1). In seventh-place is Welcome Silver Griff (PLI £715). Griff transmits the highest percentage fat in the top 10 (+0.25%), and is joined by his paternal half-brother, AOT Silver Helix, who moves up to eighth position. Both sons of Seagull-Bay Silver, Helix transmits the more extreme production with a PTA of 1,273kg for milk and 102.9kg combined fat plus protein.

Even more highly rated for HC is Seagull-Bay-MJ Applejax, now with a PLI of £700. With nearly 3,000 UK milking daughters, this high-reliability bull scores a whopping HC of £293, reflecting his daughters’ outstanding fertility index (17.6) and good udder health. Applejax also has the highest type merit in the top 10 (1.92).

Familiar names among the bulls suited for use in spring block-calving, grazing-based herds include the Jersey Danish VJ Tester, which retains his number one position among proven sires of all dairy breeds, with a spring calving index (SCI) of £462.

The number two sire is the first in a run of Holsteins, in the shape of Progenesis Unicorn. Also taking second place in the previous (December 2020) run, he has an SCI of £447.

Third place is taken by newcomer VH Balisto Brixton, whose low-maintenance feed costs and low daughter cell counts contribute to his SCI of £439.

Westcoast Guarantee, ranked fourth, is a familiar feature of these across-breed rankings, and moves up this time, thanks to an
SCI of £436.

Stowey Magician rises into the top five for the first time, with an SCI of £433.

It is little surprise that many of the same high-efficiency sires feature in the ACI rankings, with Westcoast Guarantee (ACI £640) taking the lead and Stowey Magician (ACI £612) falling in behind.

A reshuffling of the cards within the non-Holstein breeds sees Carrickshock GTW rise to the top of the British Friesian rankings.

The new number one is the Ballynagrana Centurion 2 son, whose PLI  is largely a reflection of the higher production he transmits to his daughters than his cohorts. With a PLI of £425, he transmits 528kg milk, 25.1kg fat and 23.5kg protein.

Second ranking Inch Persistent has edged down from pole position, with a PLI of £361, while third-placed Catlane Caleb (PLI £342) offers high-quality milk and by far the best daughter fertility (fertility index 9.8). Caleb also ranks well for the new HC at £169.

Fourth and fifth places go to Catlane Cromwell (PLI £314), which also has the highest HC index in the top rankings (£219) and Manorpark Google (PLI £313).

The first five places in the Jersey breed are similarly stable with the top four bulls holding exactly their positions from the December 2020 proof run.

The number one River Valley Cece Chrome transmits the highest volume production amongst them, with PTAs of 843kg milk, 36.6kg fat and 29.6kg protein. Also transmitting the highest conformation (type merit 1.8), he weighs in with a PLI of £568.

Danish VJ Raastrup HIHL Gislev (PLI £514), JX Sunset Canyon Got Maid (PLI £463) and Danish VJ Blanke Jason Janko (PLI £435) also retain their previous positions, Janko also outstanding as a health and fitness improver (HC £157). Joining them as he moves from 10th to fifth position is Danish VJ Zummit, with the best daughter fertility in the group (fertility index 6.4) and a PLI of £422.

Red and whites see similar stability although the Swedish bred VR Fabu moves into the lead from seventh position. Notable for transmission of high-quality milk and low somatic cell counts, his PLI is £512.

Second ranking VR Alatalon Flame Feton moves down from first position, now with a PLI of £490, transmitting both the highest type and best fertility (fertility index 17.1) and overall health on to his daughters (HC £234).

In third place is VR Gobel (PLI £480) ahead of fourth-ranking VR Vimpula (PLI £462). Vimpula is by far the highest milk volume improver of the leading red and white bulls, standing him ahead of long-termer Pell Pers, who rounds off the Ayrshire top five with a PLI of £453.

Other indexes are published in the breeding and genetics section of the AHDB Dairy website (dairy.ahdb.org.uk), where the Montbéliarde, Brown Swiss, Guernsey, Shorthorn and Fleckvieh are all represented.