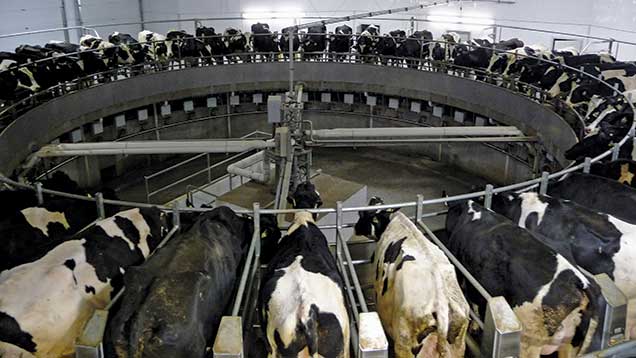 A drive to make the most of market opportunities while maintaining a sustainable system to be passed to the next generation is what drove the Walker family to expand their Ontario dairy business.

At 1,250 cows, their dairy enterprise is the largest in the state and among the top percentile in the country.

Scott Walker explains that since the mid-1990s the family has consistently bought more and more milk quota and added cows to the system.

See also: How milk supply is controlled in other parts of the world

“My grandfather had always installed in the family the idea that you don’t worry about debt and buy quota, and as soon as you have extra cashflow, put it into quota,” he says.

The Canadian dairy market still revolves around milk quotas, with quota price increasing significantly over the years to the current CA$24,000/kg (£11,886/kg). Every month, the Walkers bid for new quota and react accordingly.

“We are always planning ahead, buying more cows or changing rations and always trying to fit to quota and checking our limit,” explains Mr Walker.

“In Canada it is common to work this way as we are so influenced by quota. You need to be switched on to it, looking to the future and playing with the system.” (see “Quota system in Canada” below)

Walker Farms is run by Scott’s parents, John and Linda, together with their children Scott, John, Clint and Dayna. With four children looking to come into the business, John and Linda soon realised that to create a system that would sustain the whole family, expansion was the only option.

Succession planning has always been a primary focus for the family, with regular meetings held to discuss the future and open conversations encouraged between family members.

Each member has their own defined role, with eldest brother John on the farm deeds and plans to incorporate the others in the next two years.

The biggest move along the road to expansion came in 2008 with the purchase of an additional farm and 50-point rotary parlour. Mr Walker says this significant step was necessary due to pressure on resources at Home Farm.

The Future Crest pedigree Holstein herd is housed year round and averages 9,000kg a cow every 305 days at 3.9% fat and 3.4% protein. All milkers are housed in one shed and split into groups of 250.

Cows move into the fresh group at 50DIM. This group will all be fewer than 150DIM and waiting to be bred. They will be AI’d a maximum of three times with 95% genomic sires and then moved into one of three pens with lower-producing cows. Two sweeper bulls are then run in each group.

Cows are housed on sand cubicles designed to maximise comfort. One of the biggest challenges faced is from high ambient temperatures.

However, the location and good natural airflow at Rotary Farm mean fans are not needed. Roll-up curtains are used to help temperatures, while at the home farm, each barn has 10 fans. The milkers receive a full TMR of maize silage, haylage, corn maize, distillers, soya hulls and chopped straw.

The farm breeds all of its own replacements. Calves are housed in individual stalls and receive four litres of powdered colostrum within two hours of births. The fact one person is responsible for calf care 24 hours a day ensures all jobs get done promptly.

“We are trialing an arrangement with the Colostrum Company where it takes our raw colostrum, powderise it and ship it back to us,” he explains.

Colostrum will only be powdered if it is good quality, which ensures high standards and the service is provided free of charge as the company can sell any excess product.

“We don’t have issues with calves getting bad batches of colostrum now and overall we don’t have as much scours or pneumonia. And it requires less labour as we don’t need to test colostrum,” he says.

Calves then receive three litres of milk twice a day before weaning at eight weeks old. In the last two to three days before weaning they are put into open yards to socialise.

They then move to open housing in groups of 15-18 and receive pellets and hay and then move on to a TMR, before being moved to a feedlot at about four months old.

To start with, animals are housed in open-faced barns. Then at six months old they are vaccinated for BVD and IBR and moved to groups of 40-150 in barns with access to open pasture.

All stock receive a TMR of maize silage, haylage and minerals.

“On average, they stay at the feedlot until 12.5 months old, then move to the home farm as there is only one guy at the fee lot and 15 at the home farm,” explains Mr Walker.

“They will be there for one to three months and follow the same service protocols as the milkers, with a maximum of three services to AI. They also get weekly vet checks.”

After that, whether they are pregnant or not, they return to the feedlot, where sweeper bulls are run.

No weighing is carried out, but on average heifers are bred at 13 months old and calve at an average of 24.2 months. Heifers then return to Home Farm three weeks before calving.

“After calving, heifers remain in the fresh yard with cows for about three days and then go into a separate heifer group for 50 days,” says Mr Walker.

“This separate group gives those softer heifers a little more of a fighting chance to lie down and feed. Having these separate stages as we have expanded has also enabled us to focus on separate groups – it is these little things that add up.”

One member of staff has the sole task of checking fresh cows every day. After 50DIM, stock then move to Rotary Farm. Mr Walker says one of the main issues with the system is the high number of pen moves.

“When they are two weeks from calving they move from a larger to smaller yard. Then, when they are 50 days in milk, a five-minute trip [to the other unit] is still a trip and it is a very important time not to have stress. In an ideal world, we would have them under one roof,” he says.

Strict controls over milk production and no milk exports means Canadian dairy farmers have been largely protected from the massive milk price drops seen in other parts of the world.

“Milk price has been pretty good the past few years. There have been talks of it dropping, but it has not affected us much due to the supply management over here and quota. Canada is self-sufficient and we have been getting more incentive days to produce more,” says Scott Walker.

However, some of the industry is asking for entry into the global market, which is bringing concerns and uncertainties about exposure to global market fluctuations.

“There is a new quota policy which means farmers can sell previously non-saleable quota. That means it is adding more quota to the market to allow farmers to expand. I reckon in  seven to 10 years we won’t have quota as there is too much outside pressure,” says Mr Walker.