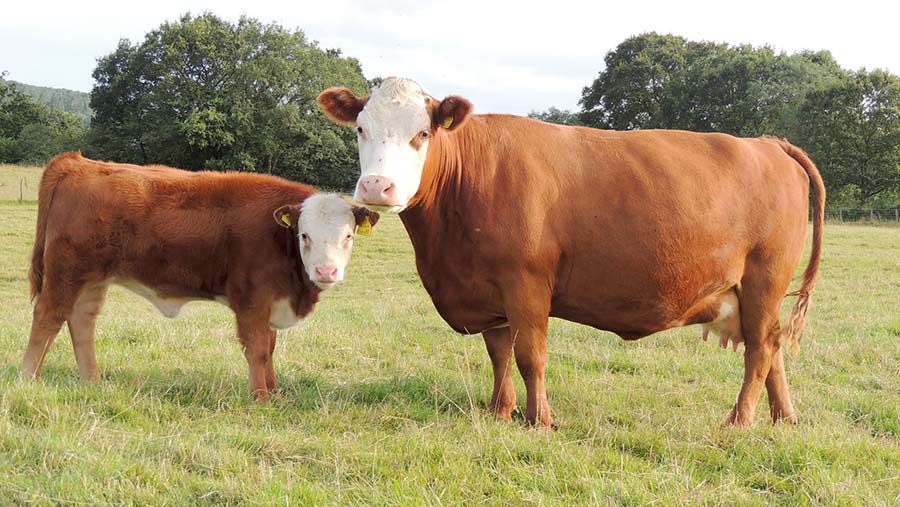 Producing efficient cattle that finish off forage alone has become a mission for many extensive beef farmers seeking to improve profit margins.

Shropshire mixed farmer Helen Forsyth believes smaller cattle can not only deliver this but can also meet growing consumer demands for smaller cuts of meat.

And, as well as bring efficient converters of grass, their reduced size results in lower carbon output, Mrs Forsyth believes. 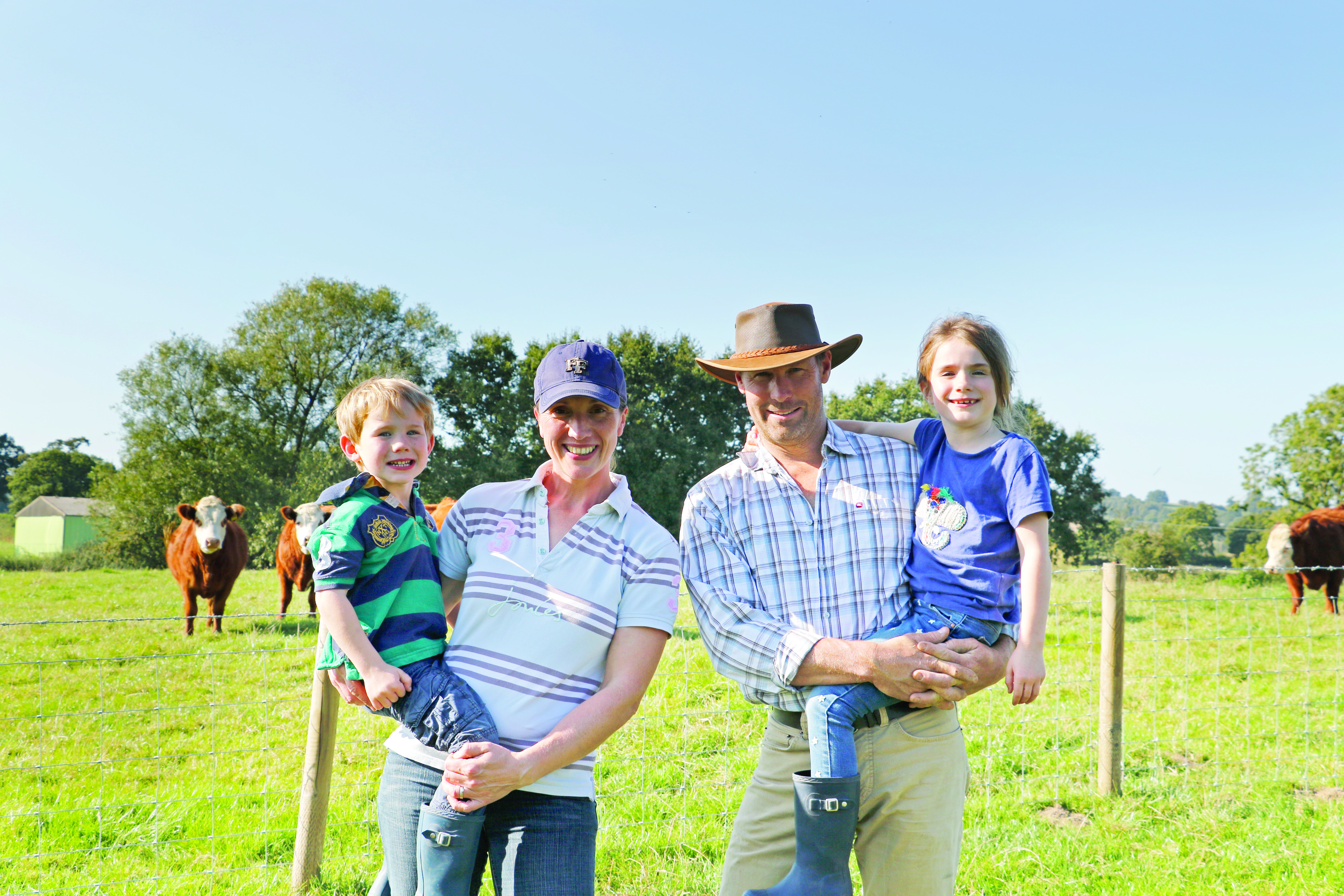 Helen and Nick Forsyth with daughter Ella and son Archie

She’s putting this theory to test, having established a small herd of Miniature Herefords at Red House Farm, which she runs in partnership with her husband Nick.

Miniature Herefords are still relatively new to the UK despite becoming increasingly popular across the Atlantic.

Standing at just 3ft 6in tall, Miniature Herefords are almost a third of the size of pure Hereford cattle. This means the herd of 41at Red House Farm can run on just 14ha of permanent pasture.

They originated from the Largent family’s Points of Rock ranch in Fort Davis, Texas. The Largent’s bred from the smallest Hereford cows and bulls in a quest to produce smaller bullock carcasses for their butchery business.

Like the Largent family, the idea to breed smaller cattle was spawned from a need for a small and manageable carcass – just like how the breed came about.

But it was a chance meeting while visiting a friend in Scotland that got Mrs Forsyth started.

Strict import regulations and the high costs involved with the use of the embryo transfer meant Mr and Mrs Forsyth used Dexters to get started.

They originally bought eight red, non-short Dexter heifers and crossed them with a Miniature Hereford bull that came from Sam Hamilton from near Lockerbie, who has since sadly passed away.

“Sam got kicked in the head by a Dexter and went to the hospital only to find he was very unwell from an unrelated condition and didn’t have long to live.”

As the herd become less manageable Mr Hamilton sent three black Dexters, their Miniature Hereford offspring and another bull to Red House and the herd has grown from there.

Bulls have since been purchased from Malcolm Gough’s Chater Valley herd, based in Rutland. Mr Gough imported embryos from the Starburst herd in Canada and is one of the only pedigree breeders in the UK.

Over the past seven years Mrs Forsyth has been building up to pure by continuing to buy in new male bloodlines to mate with heifers.

The herd now comprises 18 halfbreds, 9 three-quarter breds and two are third-generation crosses, along with the original 12 Dexters, which are slowly being phased out.

“We have 41 suckler cows now with varying degrees of miniature Hereford blood and have just had our first fourth-cross heifer calf born. We are en route to getting pure at 94%, but more importantly we have some really beefy small cattle now.

“This was our main aim, to produce a small beef cow with the docile temperament of the Hereford.”

Cows are bred to natural service, with two bulls used to prevent inbreeding and everything calving within six weeks.

The farm is wet so cattle are normally housed until the end of April and are turned out to grass once the majority have calved, but the whole herd would easily manage calving outside, notes Mrs Forsyth.

“We hardly see any of them born, except for the very occasional breech birth where we have to assist.”

Heifers are extremely early maturing and will get in-calf from four months of age, so bulls have to be removed prior to weaning at six months and heifer calves are estrumated at housing as an extra precaution.

The couple have recently added a pig finishing enterprise to the farm to help improve cashflow.

This sees them finish in excess of 1,600 pigs on a bed and breakfast agreement.

“We get paid on a pence a pig/week basis and get a performance-related bonus. Medication, feed and pigs are supplied and we pay for straw, labour and water,” says Mr Forsyth.

This dovetails nicely with the cattle enterprise, helping them to rejuvenate grassland and cut fertiliser requirements.

About 10t/acre of pig muck is applied annually to grassland and no artificial fertiliser was required for the beef grazing ground this year.

“We are phosphate and potash sufficient just with pig muck,” adds Mr Forsyth.

Heifer calves are currently retained to grow the herd but steers are finished at between 26 and 28 months following their third summer at grass.

After buying Red House Farm five years ago and increasing stock numbers, the couple made the decision to close the butchery and focus their efforts on the farm.

Instead they now sell meat direct to two local butchers, fetching around £3.65/kg. 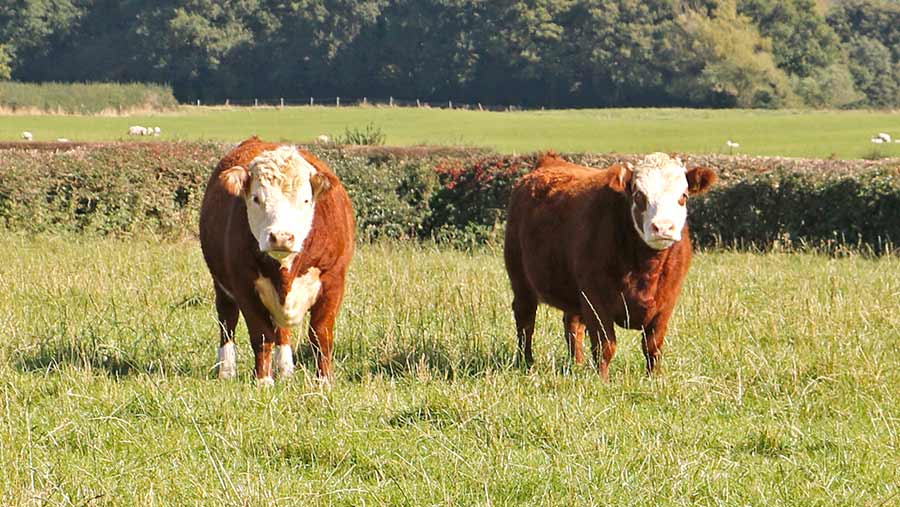 Bullocks are being finished and sold direct to two local butchers

Since introducing the Miniature Hereford carcass weights have improved significantly and cattle are finishing faster.

The Dexters were finishing at 30 months but Mrs Forsyth says they weren’t really finished at that stage. In comparison the hook weight increased from 190kg deadweight to 250kg deadweight at 28 months with the first Miniature Hereford cross and this has continued to improve.

“We have just taken three bullocks at 28 months, two halfbreds averaged 250kg and a three-quarter bred weighed 275kg. This is grass-fed alone.

“Because of their size they are reported to proportionally have a larger ribeye and you can get a really thick 8oz steak,” adds Mrs Forsyth.

The aim is to phase out the Dexters and settle with a herd of 40 Miniature Herefords.

Once they’ve built up numbers and they have enough replacements they hope to start selling surplus heifers for breeding.

“With the recent climate change reports and the suggested decrease in meat portion size, we believe there may be a place for smaller cattle in the future of mainstream farming not just for the small holder.”