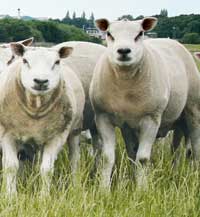 A breeding programme combining the genetics of Texel, Beltex – and even a dash of Charollais – is the basis of a thriving business built-up over almost two decades by Cheshire farmer Paul Slater.

He supplies more than 300 tups a year to commercial producers chasing premium prices for prime lambs. But it isn’t just the genetics that appeals to prime lamb producers needing instant ram power in the autumn. Feeding – or lack of it – is just as important to Mr Slater in his quest to provide them with tups fit to do the job.

“The key word is fitness not fatness. We want natural growth and don’t believe in ‘stuffing’ rams with feed in summer just to make them appeal to buyers.

“Over-feeding is the worst thing you can do to a ram. It is the biggest cause of problems at tupping time and the real reason why so many prime lamb producers are often disappointed by a crop of lambs sired by a ram that gave them the impression it was a far better sheep than it actually was,” he says.

After winning a Christmas primestock show 20 years ago with Beltex x Texel lambs, Mr Slater realised his male lambs had more to offer than simply ending up on the hook.

He admits the initial response was cautious, but now has a long list of regular buyers. Many have to meet tight contract criteria supplying major buyers, such as Waitrose, Farmfresh, Veevers and Woodheads.

Although still breeding some pure Texels, most of the flock’s 1000 ewes produce cross-bred tups for private sale and for his two early autumn auction fixtures at Penrith and Ruthin.

“It’s a criss-crossing programme, but there’s nothing hit and miss about it. Every tup we buy fits a strict selection criterion. Last year there were only three tups I wanted out of 1500 white-faced rams at Kelso.

“A well-balanced sheep carries the muscle with it and that’s what we want. We don’t want freaky muscling, but rams must have plenty of loin and length. Tight skins are absolutely essential,” Mr Slater explains.

Every ewe is hand-picked to run with certain tups to ensure standards of conformation and fleshing of the crossbred sires are maintained.

During their 18 months on the farm rams are constantly assessed for quality; any not up to Mr Slater’s exacting standards are slaughtered. Lambs are offered creep from three weeks until about 16 weeks after which it is withdrawn. But at weaning in August, sugar-beet shreds are re-introduced to all rams lambs and, although numbers are gradually reduced as the lower end of the crop is sold for slaughter, the sugar-beet diet is continued every day until each breeding ram leaves the farm the following autumn.

“We never miss a day feeding these tups, but the amounts aren’t excessive and we don’t increase the feed in the weeks prior to sale. We’ve proved that by feeding a small amount throughout the entire time the rams are here enables them to express their true growth potential and maintain it, rather than being switched off and then be expected to pile on condition in summer on a high-octane diet. That’s not good for rams and it’s not good for ram buyers,” says Mr Slater.