Investing in easy-calving bulls has brought significant gains in the maternal figures of the pedigree Charolais herd at Falleninch Farm, Stirling, with their self-replacing index lifting by 9.8 index points in one year.

But lifelong breeder and business entrepreneur Andrew Hornall stresses that figures, while a useful tool, represent only 30% of the breeding decisions. 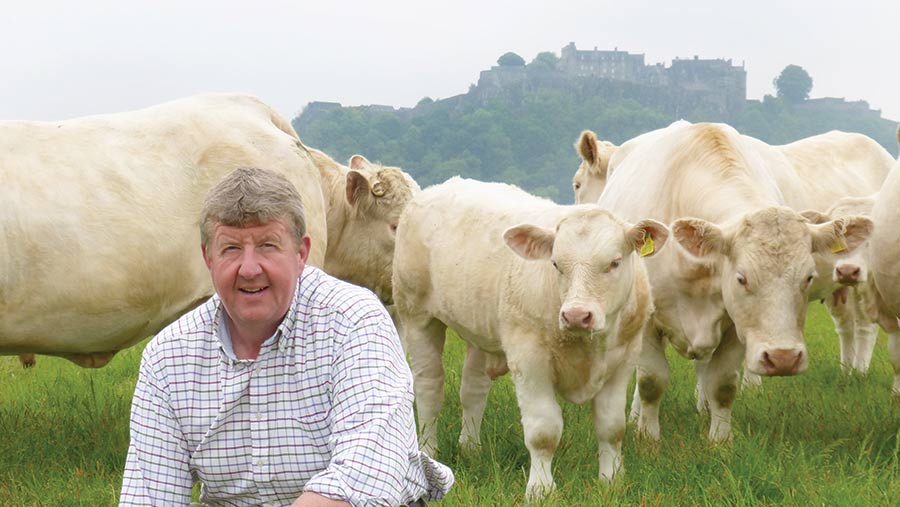 However, he freely admits that commercial buyers are increasingly scrutinising calving-ease figures as herds expand or off-farm income is needed, stretching labour resources.

Large, hard-fleshed, big-boned, difficult-calving Charolais genetics of the past are not desired in the market place, but Mr Hornall believes that, through the use of curve bender bulls like Blelack Digger, the breed has turned a corner.

“Once you get a reputation for something it’s very hard to shake off,” he admits. “The breed is getting easier to manage and we certainly don’t have the difficult calvings that I remember in the early 1970s.

“It’s a pleasure calving cows here and caesareans are a thing of the past – we’ve had only two in six years. One was a torsion and one was when I was away and staff took the ‘better safe than sorry’ approach and called a vet.”

Meticulous selection policies are used for maternal lines, which typically involves visiting farms and learning about the systems in place.

Milkiness, performance off grass, good feet, locomotion, teat size and breed character all have to be scrutinised, explains Mr Hornall, who firmly believes cattle can be bred to tick all three boxes of the commercial, pedigree and show world.

All cows have milk quality tested for butterfat and protein levels once peak lactation is over, to find the cows that produce the best quality milk, which is helping increase 200-day weight.

And, despite a run of four sets of twins, cows must raise their own calves, explains Mr Hornall, who refuses to use foster cows.

As well as genetics, management helps easy calving. Mr Hornall has a camera in the shed, feeds a hay and silage diet and supplies a calving mineral lick for the last four months of pregnancy.

Breedplan, the administrator and recorder of performance data for the breed, said the Falleninch herd had improved by selecting bulls with:

“Fast growth is what the Charolais is best at but with falling carcass weights it’s important to get the frame and finish on animals, which is why 200-day milk and controlling 600-day weights are so important,” Breedplan told Farmers Weekly.

A butchery business, a commercial cattle finishing enterprise and working closely with a farming neighbour all give the Falleninch herd a commercial focus, explains Mr Hornall. 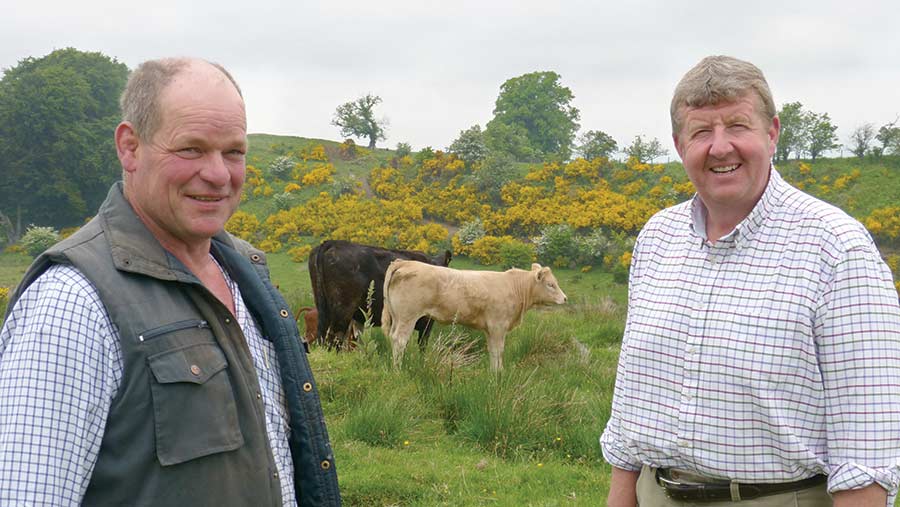 Mr Hornall and Mr McLaren have a shared vision to create a Salers-cross-Galloway suckler cow weighing 600-625kg, which can calve an easy-calving Charolais terminal sire.

A very uniform and compact group of Salers-cross heifers has been retained and bulled to a Galloway at 13 months old, and are due to calve in August. Galloway genetics and earlier calving are expected to reduce cow size and produce another 0.75 calves/cow lifetime.

“By crossing with Salers and then Galloway I hope to reduce my cow size but still put them to the Charolais bull which has been giving me such good results,” says Mr McLaren, who sells seven-month-old calves at £850-£980. One calf made 9,500gns at the Stirling Caledonia Calf show when it was sold to the Alfords, Foxhillfarm, Cullompton, Devon.

“They will be hardy from the Galloway influence and hopefully we can have a robust herd with good, wide pelvises by the time my son Donald comes back from college to farm,” he says.

Mr Hornall says that, while Falleninch cows are 900-1,000kg at grass and wean 40% of their bodyweight, they can provide the terminal sires required for a compact, commercial 600kg cow to wean 50% of its bodyweight.

Now in his 20th year using Charolais as a terminal sire, Mr McLaren is seeing average growth to weaning of 1.4kg/day, with some achieving 1.5-1.6kg.

Calving takes place inside under a camera, with less than 10% needing assistance. The herd is split, with 30 calving in spring (March/April) and 30 in autumn (September/October).

Creep is fed on an ad-lib basis, but with expansive hill grazing in place calves have 24-32ha (60-80 acres) to roam across, meaning grass and milk are important.

“When they are inside the calves can go through the feeder in one week, at pasture this is more like two and sometimes three weeks,” explains Mr McLaren. “Whatever I do I have to have easy-fleshing calves that weigh well. I sell weaned calves and I get paid on weight.”