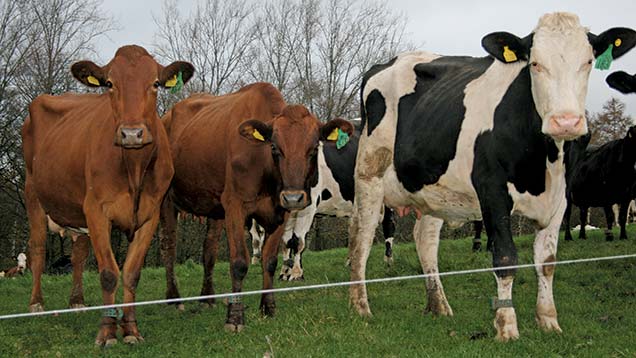 Cross-breeding has been under way at the Park family’s Sizergh Farm, near Kendal, for 14 years following the initial introduction of Scandinavian red genetics into the original Holstein herd.

But now three sire breeds – Montbeliarde, Viking Red and Holstein – are being used to maintain the ongoing progress of the cross-breeding programme.

For a time the farm was run organically and it was while looking at other organic dairy herds that Richard Park first became aware of Scandinavian red genetics through Swedish Reds.

“I was impressed by the way health traits had been prioritised by breeders over many years. Having cows that had been bred for a range of positive health issues such as mastitis resistance and easy calving was a big attraction,” says Mr Park.

The first Swedish Red cross Holstein-cross cows to come into the herd impressed sufficiently on fertility, easy calving and medium size to encourage further use of the Scandinavian genetics.

“We were happy with a cow that would give about 7,000 litres from a diet containing a minimum of 60% forage and with a very basic concentrate input.”

But Mr Park admits having succeeded with the first cross he faced the big question – as do others embarking on a cross-breeding system – “What do I do next?”

A trip to Sweden in 2002 led to a decision to continue using Swedish Red semen and upgrade to a herd of pure-bred cows.

“But in the second and third crosses there was a lot of variability, particularly in type. Breeders had selected so heavily for healthy cows, other functional traits such as udders had been rather neglected.”

While he bred some very good three-quarter-bred Swedish Reds, the level of variability triggered a rethink.

“The more you get involved, the more you start to learn about cross-breeding. As we moved further down the line with an increasing influence of one breed we were actually losing the basic benefits of hybrid vigour that we were looking for from cross-breeding.”

“Cross-breeding for the first generation is straightforward, but the ongoing programme that will produce the type of cattle you want and still maintain the hybrid vigour does need a good deal of thought.”
Richard Park

But it was after reading about a programme of dairy cow cross-breeding running in California that alerted Mr Park to the Montbeliarde – a breed he admits he wasn’t familiar with.

Investigating the breed’s potential as a component of his future hybrid dairy cows led him to use Montbeliarde semen.

“I was very pleased with the first Montbeliarde-sired cattle we produced and decided that a three-way cross using Montbeliarde, Viking Red and Holstein genetics was the way forward for us.”

This system has been run successfully for almost nine years.

“Cross-breeding for the first generation is straightforward, but the ongoing programme that will produce the type of cattle you want and still maintain the hybrid vigour does need a good deal of thought.

“We’re very happy with the combination of genetics we are using now.

“Although using four different dairy breeds in a cross-breeding programme is the best way to maintain optimum hybrid vigour, we’re satisfied with the way three-breed crossing system is working for us,” says Mr Park who stresses that red-and-white genetics are not the driving force.

“It’s the cattle, not the colour, that is the first priority,” he adds.

He believes the blend of breeds he’s now using is producing the “ideal” type of dairy cow for his system.

“These are medium-sized cows and fertility is good, which is very important for our 12-week autumn block-calving. They are easy-calving cows which again has a beneficial influence on fertility. Our calving index is 363 days.

“Cows at Sizergh Farm are managed on a high-forage diet that isn’t dependent on expensive bought-in ingredients. The current winter ration is based on about 60% forage – grass silage and whole-crop – plus wheat and a blend. Concentrates are fed in the parlour.

“We like cows to be grazing by the end of March and this year we’ve had cows out at grass until early November.

“Although this is a crossing programme, we’re not losing sight of the importance of functional conformation traits such as good udders, good legs and feet, sound locomotion as well as low somatic cell counts.”

For many milk producers embarking on a cross-breeding programme the challenge is to develop an approach of using different genetics that produces the right type of cow for their management system.

“As you move into cross-breeding, a pattern emerges in terms of knowing which cows and heifers go to which bulls. We keep a watching brief on all the breeds we’re using.

“Yes, it’s different to being involved with one breed, but the breeds we are using are improving and evolving all the time, so we’re also moving the herd forward genetically, as well as benefiting from hybrid vigour.”

Mr Park says each breed brings something specific to the mix.

“We’re looking for good udders and improved milk production from the Holstein bulls we are using; the Viking Red bulls are giving us high health traits and calving ease while the Montbeliarde is giving us strength and good constitution in our cows, as well as good milk constituents.

“And we’re pushing hard now on improving butterfat and protein because I think that’s the way the market is going,” says Mr Park.

“We’re not chasing yield. I’ve yet to see any figures that prove a correlation between profit and milk yield. The most important figure for us is the margin/litre.

“There are a lot of costly elements to producing milk that aren’t always evident from a high-yielding herd, such as a higher replacement rate and long calving intervals. Those are the hidden costs that erode margins.”

While dairy farmers undertaking cross-breeding have been considered a minority within the industry, things are changing.

“The breeding companies are now becoming aware of the increasing popularity of cross-breeding and are starting to offer advice to dairy farmers rather than leave them to their own devices.

“I’ve seen successful cross-bred programmes under way in several countries around the world. I think we can say this approach to breeding efficient dairy cows is no longer niche.”