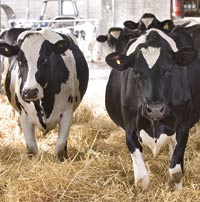 Compassion in World Farming says cows across Europe are suffering as a result of being bred to produce unreasonable amounts of milk.

The claims came after an extensive study on dairy systems by the European Food Safety Authority found that long-term genetic selection for higher milk yields was a major factor affecting cow health and welfare.

The five-part report said cattle should be genetically selected to address resistance to diseases such as lameness, as well as improving their fertility and health.

It also recommended that cattle were given enough space to take into account the increased body form and size of genetically-selected cows.

However CIWF claimed the report showed cows produced in the European Union suffered from hunger, lameness and infertility.

Calling for consumers to buy organic or RSPCA Freedom Food milk, CIWF said dairy cows were being bred to produce more milk than was healthy for them and were increasingly reared in zero-grazing systems, causing “serious welfare problems”.

High-yielding cow breeds such as Holsteins were designed to turn feed almost exclusively into milk, making them hungry and emaciated, it added.

Phil Brooke, CIWF welfare development manager said the industry had been milking cows beyond endurance for too long.

“We need to breed a robust cow which can produce sustainable amounts of milk on pasture without mining her own body – a cow with a work-life balance,” he said.

Governments and retailers should insist cows were bred for health and welfare rather than excessive yields, he added.

“It’s like they’ve not even read the report,” he said. “While there’s always room for improvement and we need to work to reduce illnesses, the report is actually balanced and gives us some good ideas about where to direct attention.

Mr Jones said it was wrong to assume athletic-looking Holsteins were starved and said effective herd management and stockmanship meant healthy cows could be reared to produce high yields.

“As soon as an athletic cow is presented people say it’s too skinny and unhealthy. They don’t say that about Paula Radcliffe. In fact, most people would want to be like her,” he said.