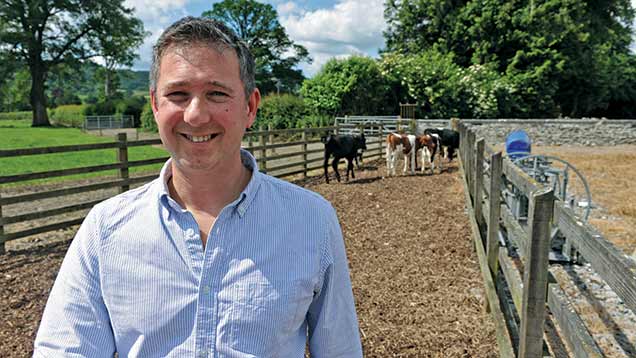 Welsh dairy farms could trim 1.3p/litre from heifer-rearing costs by taking simple steps to prevent disease and lower age at first calving, according to a new study.

The Welsh Youngstock Project scrutinised calf rearing on 75 dairy farms. It found healthier calves on the farms that took control of colostrum management. Those farms were also calving heifers earlier.

The volume of milk fed was also influential. Calves that had more than 750g of milk replacer or six litres of whole milk at peak feeding were 5kg heavier at eight weeks.

See also: How to draw up a good heifer-rearing contract

Research found there were more cases of scour on farms that fed milk instead of milk replacer, possibly because of a tendency to feed waste milk.

The majority of the farms involved in the project had year-round calving patterns, with Holstein herds averaging 310 cows. During a succession of visits, the farms’ own vets took measurements, weighed calves and interrogated farm records.

Owen Atkinson, of Dairy Veterinary Consultancy, who led the study, says the findings demonstrate there are easy gains to be made from reducing cases of pneumonia and scour.

During the survey period, 78% of the farms had scouring calves with pathogens diagnosed and this was the main cause of mortality in calves younger than six weeks.

“If calves have deep, clean bedding, they are four times less likely to scour. It is a simple change that every farmer can make,’’ said Mr Atkinson.

“What was evident from the study was there were 75 farms and 75 different ways of rearing heifers. Every farm had a bottleneck that was holding them back.’’

In addition to accelerated feeding and good bedding, farmers are advised to provide fresh water ad lib, concentrate and chopped straw from the first week and to rear calves in a separate airspace from older cattle.

Colostrum management was flagged up as crucial to the long-term productivity of dairy animals. Colostrum harvested from the mother and delivered by a teat feeder within three hours of birth was found to be more beneficial than tubing. Natural sucking from the mother was the least beneficial. “The volume didn’t seem to influence the outcomes too much in this study, but it was usually about three litres,’’ says Mr Atkinson. “Calves which blood tests showed had good antibody levels were twice as likely not to scour.’’

Serving heifers earlier was the biggest cost advantage flagged up in the study. The average age of first calving was 28.2 months.

“On all farms there was a consistent two-month gap between the intended first service date and the actual,’’ said Mr Atkinson. “There is a zero cost investment from tightening this up.’’