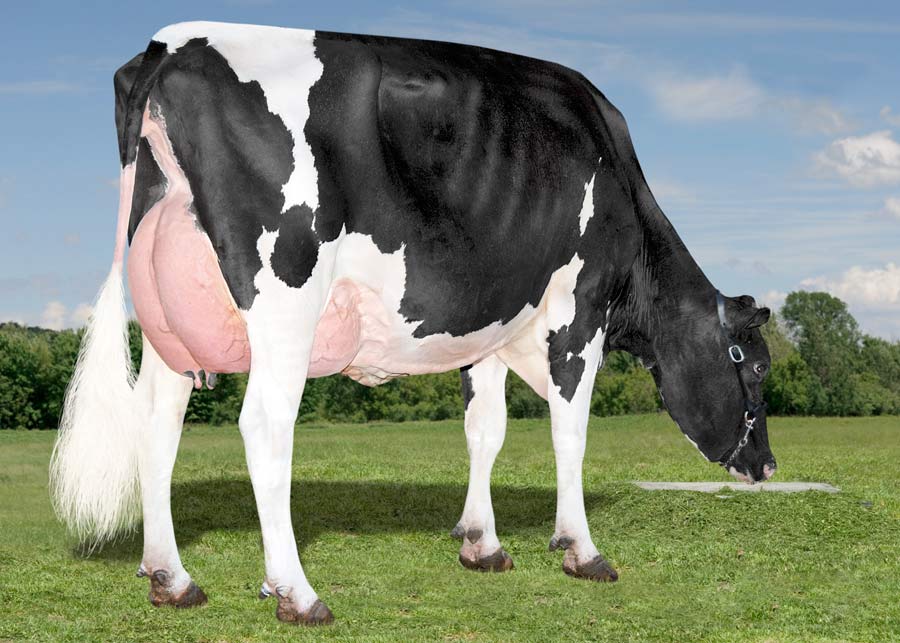 The genomic sire Bomaz AltaTopshot has reached the number one slot in the proven Holstein bull proof run for December, AHDB Dairy has announced.

Topshot graduated in the summer from the genomic list into second position among proven sires. But as more of his daughters have come into milk in his native North America, he has gone one better with a Profitable Lifetime Index (PLI) of £788.

Bred on a family farm in the heart of dairying country in Wisconsin, Topshot is a son of the UK-owned Cogent Supershot.

Topshot’s Predicted Transmitting Abilities (PTAs) for production include an impressive 1,151kg milk and 35.3kg protein while he also transmits favourable Lameness Advantage, at +3.3.

This Cashcoin son has the best Lifespan Index (LS) of the top 20 sires at +225 days. He combines this with strong daughter Fertility Index (+12.4), good Lameness Advantage (+3.2) and one of the best Maintenance Index figures among the top £PLI bulls, at -13.

The figures indicate that his daughters require less feeding simply to sustain themselves compared with the average UK cow.

A new entry can be found in third place in the form of Seagull-Bay SR Stardust (PLI £732) – an AltaSpring son which displays strong daughter fertility figures at +12.4.

Outside the proven bull proof run, the young Holstein sire Bomaz Fynn has broken the 50kg fat mark for the first time and taken the top slot in the genomic rankings.

With a PLI of £878, Fynn’s daughters are predicted to yield 50kg more fat during their lactations than the national average cow.

Ranked second, Denovo 14566 Crosby has a solid PTA for production and the highest Lameness Advantage of the top 20 bulls.

This high-ranking son of DG Charley, again from a Rubicon dam, has a PLI of £871.

Another Frazzled son, Melarry Frazz Arrowhead, took third spot with a PLI of £870. He has excellent daughter maintenance scores (-10) and good SCC (-33).

Arrowhead is also the best improver of daughter fertility in the top 20 (+14.2). His survival scores are also superb, with a strong +3.3 calf survival – boosted by the best calving ease prediction in the top 10 – and excellent daughter Lifespan Index (LS).

Expressed on a new scale for the first time with this index run, his LS of +219 days means his daughters are predicted to live, on average, 219 days longer than the average cow.

The highest-ranking Jersey bull was JX Sunset Canyon Got Maid.

Got Maid graduated into the Jersey breed ranking from his AHDB Dairy genomic young sire prediction and has an impressive PLI of £550.

He is a breed leader for production potential, boasting 795kg milk and a combined 68.9kg fat and protein while his Type Merit is 1.1.

Got Maid edges the former number one, Danish VJ Tudvad, into second position. Tudvad’s figures remain largely unchanged at PLI £517 and he is still the breed leader for udder health (-28 SCC, -4 Mastitis).

Among British Friesians, Lakemead Jingle retained the number one position he earned in the last proof run, with a PLI of £486.

His equally impressive production figures at 619kg milk and 20.6kg protein make him one of the best of the breed’s proven sires.

Rating even better for survival traits is third placed Catlane Cromwell, who has the highest cow lifespan on the list (+158 days) as well as breed-topping calf survival (+6.8).

UK-bred Rosehill Manderville now has 138 UK daughters and moves up two places to second, with a PLI of £549.

His high fat transmission (+33.3kg, +0.24%) makes him an attractive option for those looking to increase fat.