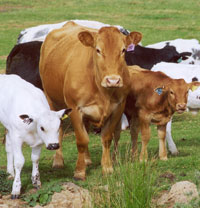 A new docility breeding value to help breeders and buyers of Limousin cattle is being launched for beef producers in the UK for the first time.

Developed by Limousin breeders, the British Limousin Cattle Society, Signet and Egenes, with funding support from the Biosciences Knowledge Transfer Network, the docility Estimated Breeding Value now means beef producers will be able to select animals on the basis of their genetic merit for calmness when handled, rather than relying on anecdotal evidence and chance. It can be viewed online for all Limousin cattle at http://www.egenes.co.uk/bascosearchbeef

Alison Glasgow, breeding specialist with Signet – part of EBLEX – which delivers the evaluation service, says various surveys carried out among commercial calf producers unanimously identify docility as a main selection driver when purchasing decisions are being made. “This new EBV provides a layer of independent information on an animal’s likely disposition, based on what we know about it and its relatives and will assist Limousin breeders in the selection decisions that will meet this market demand.”

Docility is defined as response to being handled in a crush or similar restrained environment, like a race. It is approximately 40% heritable (ie approximately 40% of observed behaviour is under genetic control). The remaining 60% is subject to environmental influence and learning.

This level of heritability is considered moderate and is comparable with many of the growth and carcase traits that the industry is more familiar with. The obvious benefits of handling calmer cows are human safety and animal welfare, but there are some wider benefits that may not be apparent upon first consideration.

Docility is associated with increases in herd production, since there are strong correlations with the growth and carcass traits, as well as decreases in herd costs, through reductions in labour and management costs.

Ms Glasgow adds: “Rapid gain within a population can be made once breeders have information such as EBVs to assist their decisions. In Australia, for example, the Limousin breed improved the proportion of animals that could be considered calm in the population by 16 to 17% over an 11-year period from when it first started to evaluate docility.

“Production systems in the UK are increasingly relying on fewer staff and this development is with an eye on how the demands of commercial producers’ are changing when it comes to buying replacement breeding stock.”