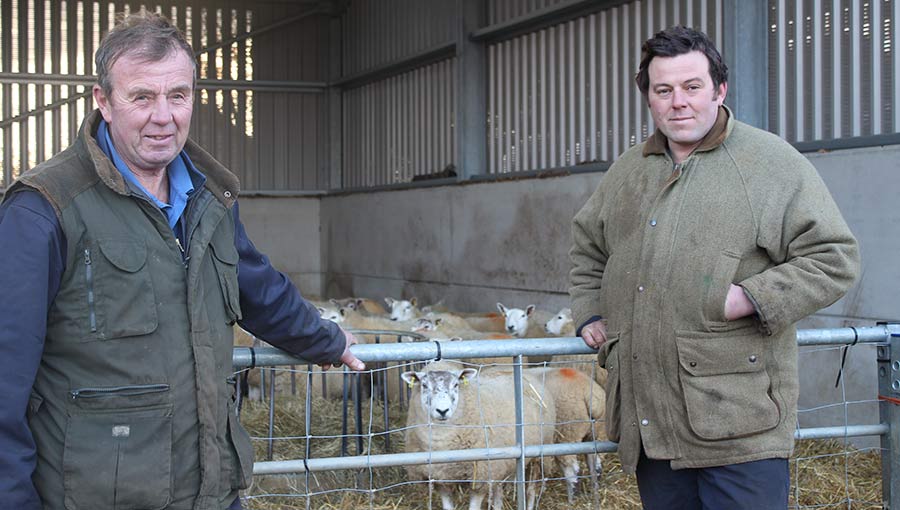 Scanning results have been hugely variable this winter following a tough spring, a dry summer and tight grazing on many farms, with some scanning results back 20-40%.

Many early lambers that tupped close to the drought or during the drought have been left with disappointing scanning results.

He is blaming his disappointing early December scanning of 170% on the prolonged hot, dry summer and the low nutritional value of grass. Mr Scott’s sheep normally scan at 200%.

Barren ewes were up, triplets down 30% and there are far more singles than triplets this year, he says.

“We’re on ironstone ground and it does dry up quickly,” says Tom, who farms a mixed sheep and arable farm with father Charlie (left).

The ewes were tupped in September, and, although they looked in reasonable condition, Tom believes they might have been short of quality grass for flushing after being fed haylage and a high-energy mineral lick from July after grass growth stopped.

Ewes then strip-grazed oily radish into early winter before being housed to lamb indoors. He is currently supplementing the February lambing ewes with a high-energy and protein concentrate.

“The ewes were a bit leaner that we’d have liked at scanning so this season we’ll be a bit more generous with concentrate rates,” Tom adds.

What can we learn from early lambers?

Sheep and beef consultant Dr Liz Genever says there are important lessons to learn from the 2018 drought.

And while thin sheep could be a problem this year, she points to emerging research finding ovary development is happening earlier than the industry previously thought – as early as eight weeks into lactation.

She says that, in some cases, sheep were stressed through the summer and leaner than normal. She gives advice on what to do in late gestation following a poor scanning result.

Scanning from Staffordshire and Shropshire across mid-Wales to the west coast.

“Earlier February lambers could be the worst affected, with many flocks down 10-20%. Some flocks didn’t recover from the tough spring and others were short of feed during tupping after the drought.

“One farm tried flushing their sheep through tupping but ran out of grass, so they were on a falling place of nutrition. After expecting 150% they were disappointed with 120%.

“However, some lower scannings are due to triplets dropping from 20-25% to only 10%, so it’s not necessarily bad news.”

Scanning across East Anglia, the East Midlands, into Wales and across southern England.

“Results are very variable. A dry summer has kept fluke issues at bay for some and supplementary feeding has kept some sheep in good order.

“Some farms are pleased, some are down 5%, some down 20-30% and there are some shockingly low results.”

“People on heavy land, like Thrapston and Peterborough, found that once the land eventually dried and cracked it couldn’t hold the rain when it did come.

Scanning across Cumbria, Lancashire and across the Pennines into County Durham and North Yorkshire.

“It’s difficult to generalise. Soil type and crop availability are big factors, although this year the tables might have turned slightly.

“Usually the trend is more farms in the West are plagued by liver fluke and the drier farms in Durham and North Yorkshire to scan better. This year the dry summer has alleviated fluke in the West and they had more grass.”