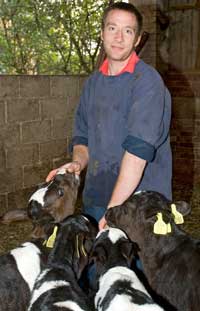 Recently I had one of the worst starts to a day. To kick it off at 6.30am was a cow who had calved in the night with a dead heifer and beside her a cow calving with milk fever.

I gave her a bolus and went about my jobs, only to find on my return an hour later, a white tail hanging out.

After a short struggle, I passed her to the vet who happened to be coming in for a routine visit. An hour later, I had two dead heifer calves and one dead bull calf and a cow that was still down despite my best efforts with the hoist through the day.

However, the vet visit went well with lots of positives pds particularly in the bulling heifers, which made up for our poor showing last time.

Maize harvesting is finished and after my initial panic we would not get our “bumper” crop in the clamps, we did with a bit to spare.

However, a yield of 12.5t/acre was a little disappointing.

I had a great day at the Dairy Event and Livestock Show with lots to see and plenty of familiar faces to chat with. I bought a small progesterone testing kit which I hope will enable me to serve weak heat cows with more confidence and better semen as a result. I will keep you informed how it goes.

My daughter, Grace, celebrated her 1st birthday recently and we had a great little party for her and also had an early gift in the form of a two month premature calf from my Vaakje heifer. Ickle pickle, as we now call her, is doing well and making a lovely mess in my front porch.