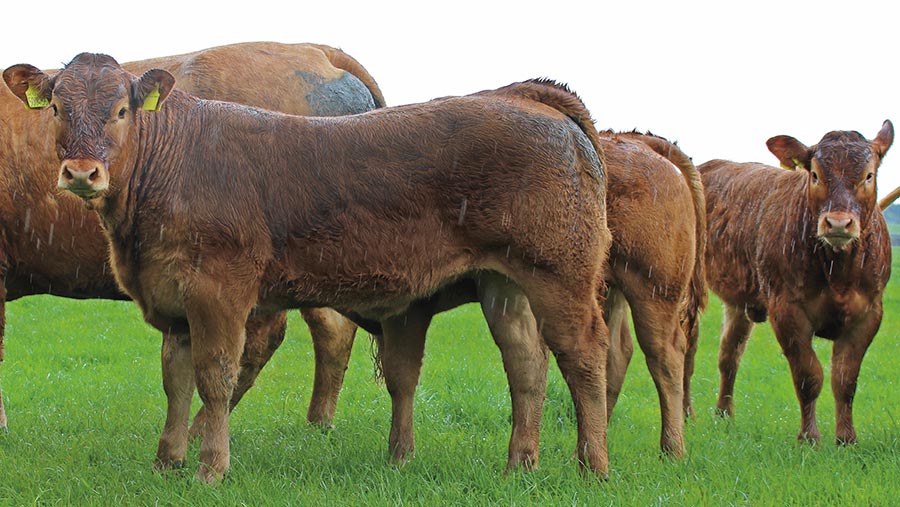 Genomic EBVs (GEBVs) may be familiar to dairy farmers but in the beef sector, genomic testing is a relatively new concept and is currently available only for the Limousin breed.

For one Yorkshire farmer, GEBVs and EBVs are helping him make better breeding choices, so he can constantly improve his herd as well as the bulls he is selling.

At £35 a calf it is a big investment, but one he says is worth it when it comes to informing his breeding decisions.

The 53-cow suckler herd at Hill Top Farm mainly calve between October and January and are turned out at the end of April.

Calves are weaned in September/October at about nine months old.

Cows are bred on a simple synchronisation programme and are AI’d in batches and PD’d prior to turnout with a success rate to AI of about 75%.

Two sweeper bulls then run with the cows. The herd has a high health status, being Johne’s level 1 since 2004 and BVD and IBR accredited

The aims of the herd are to produce high health bulls for the commercial farmer that have a shorter gestation length than average, are easy calving and have excellent growth rates.

AI is used mainly for producing replacement females and on the heifers. Replacements are selected on:

Stock bulls are used to sweep up after AI; one particularly, Goldies Nicholas, has super calving figures with a Gestation Length of -5.9 and a Calving Value of 7, putting him in the top 1%, as well as a beef value of +52, also in the top 1% of the breed.

Mr Cooper says: “When we first started going down this route of producing short gestation bulls, we were doing the opposite of what many other breeders were doing as they were breeding more muscular, heavy animals.

“Our customers were saying they wanted easy calving as their number one priority followed by docility and then growth, therefore we decided to try to breed to what our customers wanted.”

Homebyres Drummie and Kaprico Eravelle were two of the first curve bender bulls Mr Cooper introduced into the herd, being in the top 1% for Gestation Length.

He was also in the top 1% of the breed for calving ease and 400-day weight and had two copies of the F94L “profit gene”. 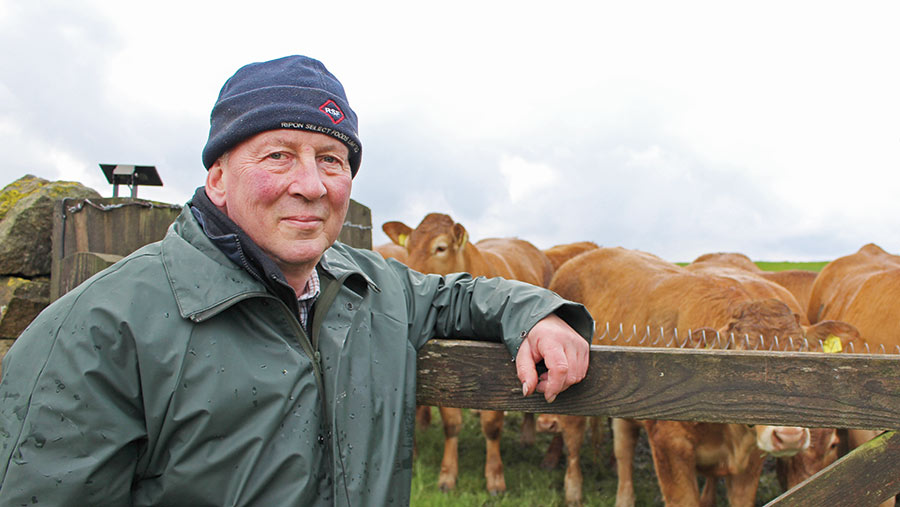 Limousins containing two copies of the F94L gene have been found to increase the number of muscle fibres, thereby increasing carcass yield with no associated increase in calving difficulty, lowered fertility or longevity.

Mr Cooper says: “More beef is coming from the dairy industry which is why we are breeding bulls with short gestation lengths.

“Kaprico Eravelle was purchased particularly for this quality and he has proved to be very easy calving, with a gestation length of around 283 days.”

Eravelle has also been one of the most consistent bulls for producing offspring.

“He has added a lot of length into the herd. When his calves were first born, they were like little fawns, but at six weeks old they dramatically altered.”

Without genomic testing and studying each EBV and GEBV, Mr Cooper would not be able to make the informed breeding decisions he does today.

Genomic testing allows him to: 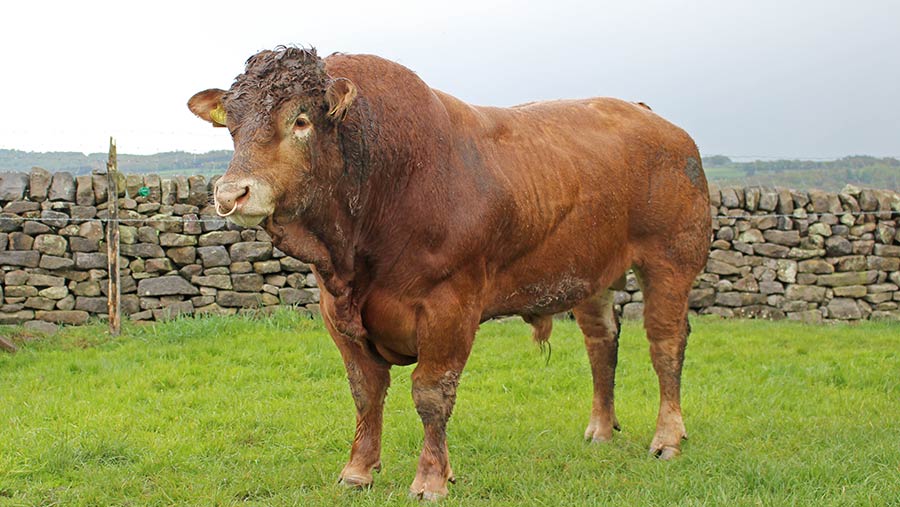 He says: “When we are looking at individual figures, we are not looking for extremes in any one trait. We aim to produce pedigree bulls that will consistently deliver for the commercial farmer – both beef and dairy.

“When we first started out our aim was to produce the ultimate £100,000 bull. However, we soon realised that this wasn’t going to pay and most likely was never going to happen.

“Instead we are trying to produce a unique product.’’

Cows with heifer calves and cows with bull calves are managed as two separate groups.

A 16% protein creep feed is offered to all calves at grass to stimulate rumen development and transition them on to their growing ration.

Once they are weaned, bulls spend two weeks indoors and are then outside throughout the day over winter and housed at night.

Mr Cooper explains: “We have a 0.8ha sacrificial paddock that we use to exercise the bulls. It helps build their muscle. They must work hard, especially in winter when it is wet.

We also find it helps their temperament with bringing them in and out of the shed on a regular basis.

“Bulls are fed dry haylage, straw and a good quality ration ad lib plus sugar beet. We are aiming for a moderate growth of about 1.5kg a day.

We like to present bulls for sale that are fit, not fat – almost a bit raw looking. The bulls are sold ready to work.” 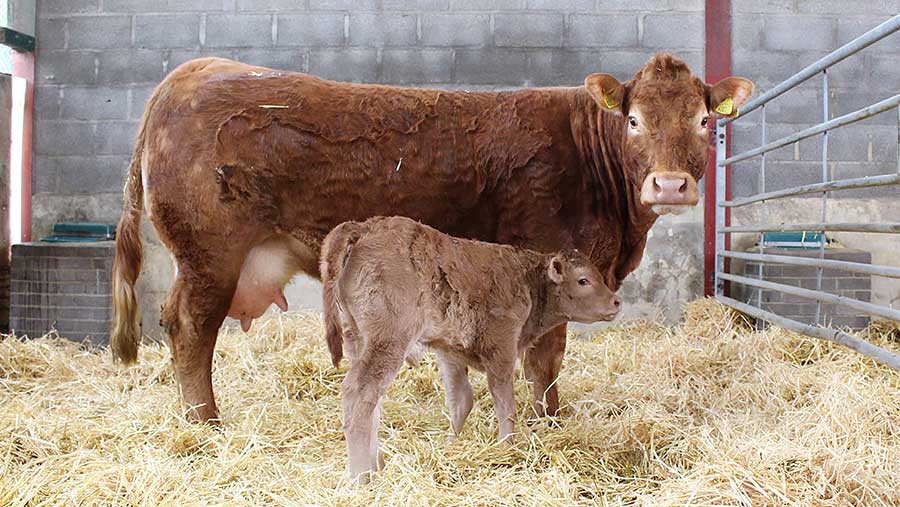 Bulls are typically sold from 14 months onwards. Seven homebred bulls are currently in AI studs in the UK and Ireland, being used in a mixture of pedigree, commercial and dairy herds across both countries.

All calves are weighed every 100 days, with the data fed to the Limousin Society to help generate EBVs.

It is also used on the farm to understand which dams are milking well. This in turn helps to decide which heifers to keep.

Heifers calve between 30 and 36 months. All animals are halter trained as a way of selecting for docility, with any aggressive animals removed.

Visual Image Analysis (VIA) data from selected ABP abattoirs, in conjunction with animal DNA and records from BCMS, are used to produce genomic breeding values for:

Abattoir records from 1,200 Limousin bred steers that had similar carcass weights and conformation on the Europ grid had a 2kg difference in striploin weight when graded using VIA.

“At a retail value of between £35-40/kg for striploin, it’s not difficult to see there is a value to be captured that you can’t see by eye but only when you look at the GEBVs of animals.”

When the combined differences between all six primal cuts were examined, the difference in retail value between the top and bottom third of animals was in the region of £150 a head.

Ms Glasgow adds: “The beauty of GEBVs is you get a high level of accuracy much quicker. You can look at young bulls that are not proven but have carcass traits that are respectable and with good accuracy.

“Taking a DNA sample also gives parentage verification and genotypes for polled and myostatin. The data gives farmers a whole suite of breeding information that can help them avoid making costly breeding mistakes. It can also help them get to where they want to be quicker.”