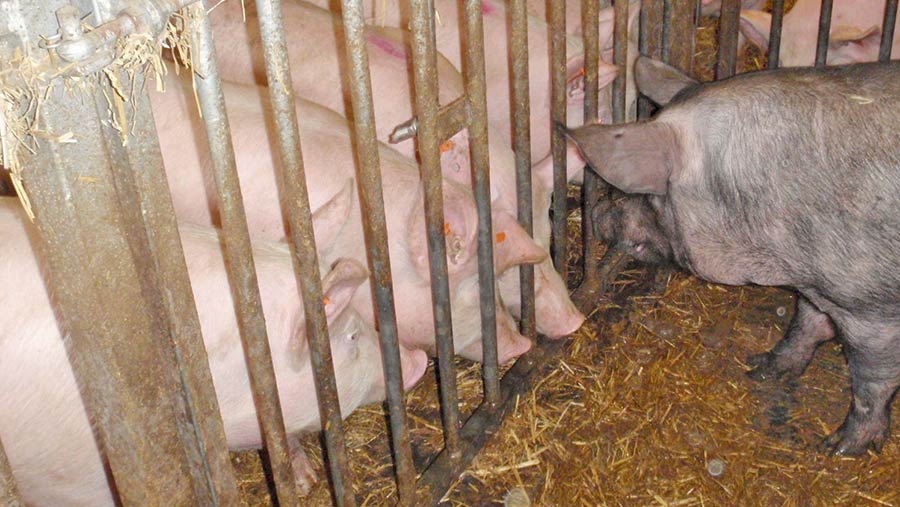 Decisions made around breeding have a big influence on the future productivity of gilts so getting reproduction right at this stage is an important link in the performance of the herd long term.

Breed a gilt too early and she will produce small litters over successive parities, not just the first.

But age is by no means the only factor that must be spot on to fully exploit the animal’s future potential.

Get the age, weight or body condition wrong and the gilt will be programmed to underperform, warns Alan Stewart, senior pig lecturer at Harper Adams University.

For units that achieve all three targets, while also having good protocols around bringing gilts into oestrus and the timing of service, there is no reason why conception rates of 100% cannot be achieved, he says.

Below he offers step-by-step guidance on how to maximise conception rate in gilts.

Step one: Target the correct age and weight at first service

With genetic improvement in growth has come an increase in sow size and this has altered target serving weights for gilts.

For most commercial hybrids, the ideal serving weight is 140-150kg – the equivalent of 60% of the two-year-old dam weight.

But there is room for flexibility, particularly in three-week batch farrowing systems such as the one in place in the Harper Adams pig unit.

If the gilt is not quite heavy enough at the targeted service period, they will serve her in the next three-week cycle which means our service weights are above optimum.

As pigs are fast-growing animals, age must be considered in combination with weight.

At a normal growth rate for a commercial breed, a gilt will hit 90kg in 140 days.

Introducing a specialist gilt-rearing diet from 70kg and restricted feeding from 120kg slows down growth while allowing the gilt to develop reproductive function and improve lifetime performance.

This means she will be ready to serve at 240 days, allowing her to farrow on her first birthday.

While both age and size are important, it is age that holds most significance.

“The age is needed to get the gilt fully developed and cycling. If you serve a gilt too early you are likely to get small litters and poorer conception and if you serve later than needed you are losing time and money.’’

Mr Stewart recommends penning gilts in groups once they weigh 70kg to allow socialisation and, once they hit 110kg, introduce daily boar contact for 10 minutes.

This short period of contact should maintain the interest of the gilts, while introducing them to the pheromones produced by the boar.

“You don’t need to push for early puberty, but you do need to get them cycling by 180 days of age,” explains Mr Stewart.

He advises using a keen, 12-month-old boar and allowing only nose-to-nose contact at the beginning by separating gilts from the boar with a gate or barrier.

Boar contact should be limited to preserve the boar’s libido and to prevent gilts getting too familiar with the boar, as this can have a negative impact on mating.

In small herds, if it’s not possible for gilts to achieve nose-to-nose contact with a mature boar, synthetically produced boar odour products are available. These may also aid heat detection and identify when the gilt is ready to be served.

Ensure gilts have a good feed intake during the cycle prior to service – do nothing that will interfere with their appetite.

Once you know gilts are cycling, aim for insemination on their third or fourth cycle.

Gilts within a group will start cycling at different times but oestrus can be synchronised with a synthetic progesterone analogue to allow batch serving.

Once all gilts are cycling, administer the progestin orally and stop boar contact. After 18 days withdraw progestin and the gilts will come into heat six days later.

However, this system will only work if the gilt is cycling normally.

The best time for insemination is six hours prior to ovulation which, in gilts, is approximately 12-24 hours after the first signs of standing heat. However, it can be difficult to identify when a gilt is in standing heat.

Persevere with gilts as they may show signs of oestrus but not show the standing reflex.

After the initial stimulation in the presence of a boar apply pressure on the gilt’s back and if at first she doesn’t stand, test again after 20 minutes. This will give time for the cyclic release of the hormone oxytocin in the body to trigger a standing heat response.

Live matings should always be supervised throughout and the boar should be carefully selected. It mustn’t be too large to risk causing injury to the gilt, it should also be experienced and well-practised to get the job done effectively.

As with all AI procedures, use service facilities that the gilt is familiar with and ensure there are no unexpected stressors such as radios and other background noise.

“Gently introduce the catheter and encourage a strong stance by interacting with the gilt, be patient and do not force the semen in.”

Repeat the heat detection and insemination no more than 24 hours later.

Post-mating gilts should be allowed to settle for 15 minutes before being returned to the group.