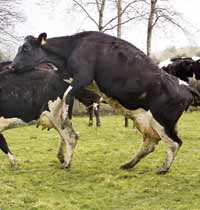 Commenting on analysis of 500 NMR recorded herds, representing a cross-section of UK black and white herds, he says the variation between the top and bottom performing farms, particularly for these two parameters, is both frightening and encouraging.

The study looked at the variation in herd performance for 25 parameters, covering production, fertility and health. Data from the randomly selected farms – which provide good representation of the national herd – is used in NMR’s InterHerd+ dairy management program as a benchmark for other producers.

A target for each parameter is set at a realistic level and reflects what one in four of the herds sampled are already achieving, says Dr Hanks.

“A lot of farmers, who are in the middle in terms of performance, think this is OK, but they need to challenge themselves. By doing so they have the opportunity to maximise efficiencies.”

Heat detection was a key area of weakness flagged up by the recorded herds. This was demonstrated by a lower-than-desired percentage service interval at 18-24 days.

“When a cow is served, but fails to conceive, you would assume she will come back cycling after 21 days. This figure shows the percentage of these cows that are served at the next available opportunity,” explains Dr Hanks.

“One in four farmers is achieving more than 38% in this period, which is excellent. However, 25% of herds achieve less than 22%.”

“However, many farmers focus on conception rates, miss oestrus detection and let the voluntary waiting period get too long.”

As yields increase, cows are less likely to express obvious signs of oestrus. This, coupled with an increasing number of cows for every person, means it is getting harder to spot bulling animals.

However, vet John Cook, of Genus ABS, stresses that when a cow is not healthy enough, she will be incapable of expressing heat.

“When a cow is not capable of expressing oestrus, you won’t see it. Heat is as much a psychological event as a physiological one. When cows are over stocked or housed on slippery flooring, she won’t express oestrus.”

“These chronic cows are very important. When a farm has less than 10% chronics, they are unlikely to have overall SCC problems.” And according to Dr Hanks, 57% of high SCC samples sent to NMR are from persistent offenders.

“Farmers want to look at cows with the longest run of high somatic cell counts. However, these cows are already broken. The aim should be to stop them from emerging in the first place.”