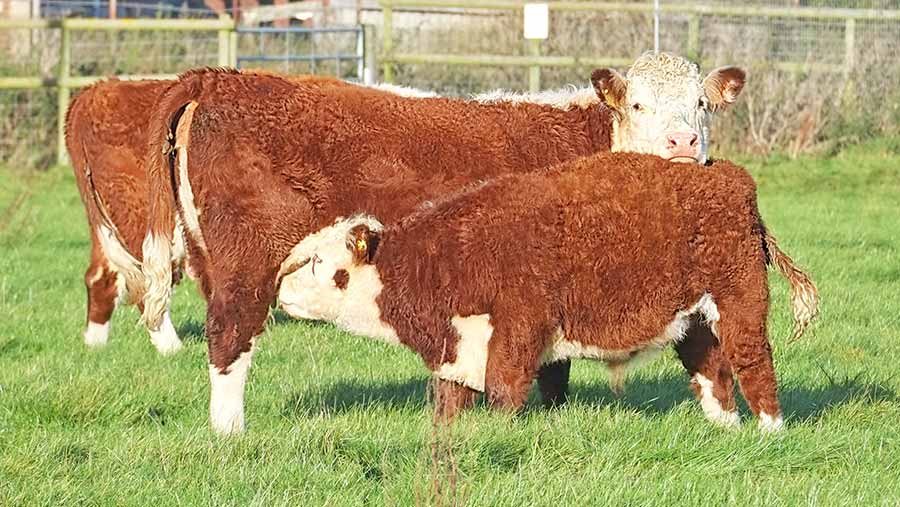 The farm switched to an all-beef enterprise in 2006 after the dairy herd was dispersed. The Spinney suckler herd now numbers about 130 cows, of which 80 are pedigree Herefords.

On the pedigree and suckler side of the business, the herd is all spring calving, with bulls put out to the cows mid-May for about 12 weeks.

Four Hereford bulls are used, with all pure progeny registered with the breed society – including those destined for the commercial finishing side as heifers or steers. 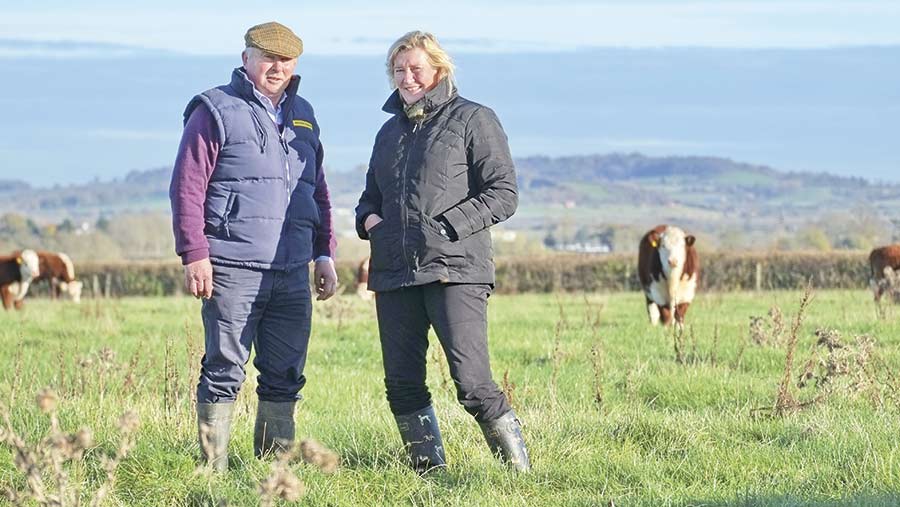 Although some females are sold privately or kept as replacements, Mr Mann emphasises this is a commercial operation, with most of the calves entering the on-farm finishing unit.

All but 20ha of the farm is down to permanent pasture and it produces about 2,000t of clamped grass silage.

The remaining 20ha grows winter wheat for crimped grain to be fed to the finishers. There is also a “muck-for-straw” agreement with local arable farms.

“Given the feed and buildings we have, we try to have about 800 head of cattle on the farm at any one time and finish more than 500 head a year,” Mr Mann explains.

Additional store cattle for the finishing enterprise are bought in privately or from Meadow Quality and are native-bred – either Hereford- or Angus-sired – with 90% destined for Dovecote Park and the rest going to Dunbia.

“We are after predominantly Hereford-bred weaned calves or older store cattle, which will go on to finish efficiently and ultimately give a good return,” Mr Mann adds.

When selecting replacements, they favour a moderate size – not too big or too small – with a good forage capacity and easy calving.

“We also want our cows to be long-lived and ultimately give a good return on grass throughout their lives,” adds Mr Mann.

All cows – both pure and cross-bred – are given a calving score and generally no assistance is required.

The most recent addition to the bull battery is River Rock Superstar, bred by Tony Hartnett and purchased at Tullamore Show during a Hereford Club trip to Ireland.

“I like a decent, growthy bull with a bit of frame and good temperament. Visual appeal has to be backed up by figures and for me it’s very important to look at the bull’s dam as she will have a big impact on the look and performance of the future cow herd,” says Mr Mann.

The oldest bull, still active in the herd aged nine, is the home-bred Spinney Admission.

About 20 home-bred replacements are retained each year for breeding, with a new bull bought in every year or so as required to maintain four bulls on farm at any one time. Hereford bulls are used across all cows and first-calving heifers.

The Spinney prefix is a horned herd and although there is a strong purebred Hereford base, with some pedigree animals sold privately nearby, TB cases mean the Manns tend not to breed specifically for the pedigree market. 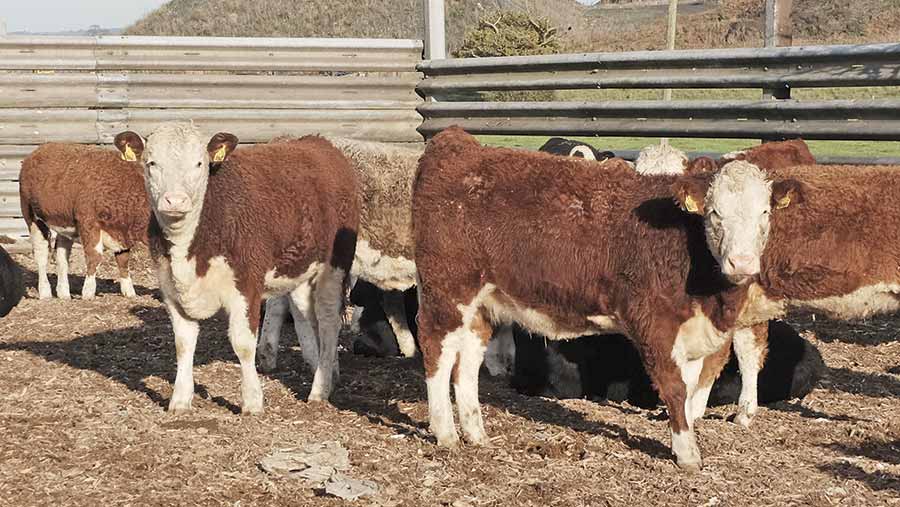 The finishing unit comprises two open-sided sheds with a further outdoor woodchip-floored corral. A new feeding shed is under construction and will increase the capacity to 1,000 head of cattle.

Cattle are weighed frequently and regularly (every four to six weeks) with EID used to record the data and simplify the management system.

Generally, a batch of 40-50 cattle leaves the farm each month. This helps cashflow and suits what Mr Mann calls his “dairy mentality”, having been used to receiving a milk cheque every month.

Male calves are steered and kept for finishing with the best sold at 12-14 months and the rest going out to grass from July onwards.

“Dovecote Park is looking for a deadweight of 260-380kg for steers and heifers, with our best heifers reaching that target from 18 months old,” Mr Mann explains.

“We receive a premium of 30-40p/kg, which rewards the ability of native-bred cattle like the Hereford to finish off grass or on a forage-based diet to produce traditional, tasty and tender beef with good levels of marbling,” Mr Mann says.

“We have heavy soil here and good grass, so the Hereford is the ideal choice to make the best use of what we have,” he adds.

“Cattle on grass achieve about 0.65-0.75kg daily liveweight gain with well over 1kg in the finishing sheds.

“I don’t like anything to get too fat and want animals to develop a good frame with a decent capacity, so a roughage-based diet suits my system well.”