Pregnancy rates have climbed from 28% to 35% since the Cope family improved transition cow accommodation.

Before buying the neighbouring Adderley Lodge Farm in November 2019, transition space was a pinch point at the Copes’ home farm, Bawhill Farm, near Market Drayton, where they milk 1,150 cows.

Husband-and-wife team Steve and Carolyn Cope, along with Steve’s parents, Rob and Geryl, previously operated a “just-in-time” calving system, with close-up-calving cows kept in 49 cubicles for 14 days, and moved to a calving pen at the point of calving. But cows weren’t in transition for long enough. 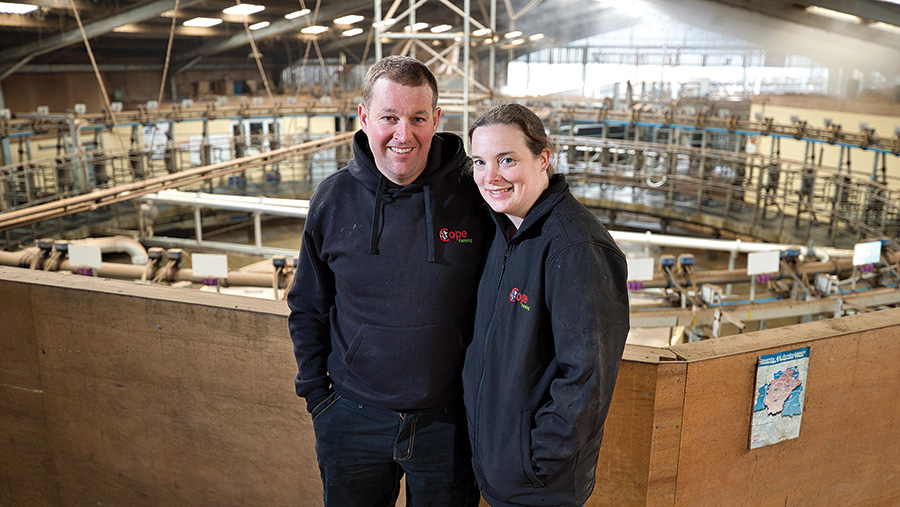 “We had expanded cow numbers and we were trying to improve the transition, but facilities were becoming tight and we could never get it right,” admits Mr Cope.

“Once the farm [next door] came on the market, it seemed like the logical next step to make that into [dedicated] accommodation for transition cows.”

They transformed an existing shed at Adderley Lodge Farm into state-of-the-art transition accommodation. Close-up dry cows moved into the shed last July, and it means they now have a minimum of three weeks in transition.

“Once they come here, they are socially stable. Before, we would have been moving cows into calving pens on a daily basis, which meant there was always social turmoil before calving and that caused us a lot of problems,” he adds.

Mrs Cope says the transition accommodation provides the cows with a rest from the hustle and bustle of the dairy and gives them plenty of time to recuperate before they rejoin the milking herd.

The shed was modelled on a transition unit Mr Cope saw at George DeRuyter’s farm when he visited the US in 2017, and has been designed to maintain social stability and reduce stress.

Cows enter the building in pens of 10 three weeks before calving, and stay within groups right up until they calve. 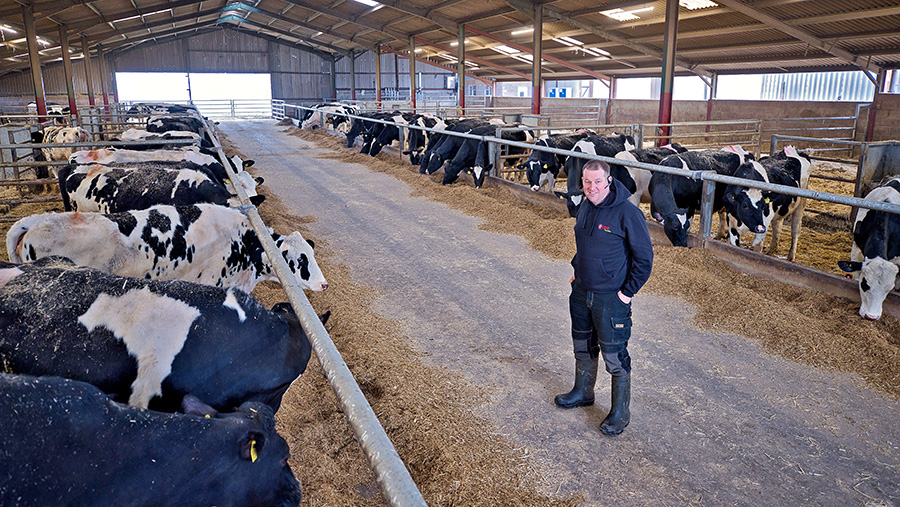 The building spans 30x61m and used to be an equine facility. It has been retrofitted with gates and concrete panels to create nine pens, each offering 12.5x12m of space, with a 3.6m scrape passageway.

Each pen has its own fast-draining water trough measuring 1.2m. Cows are bedded on deep straw and fed a maize and straw ration.

At the point of calving, cows are left to calve by themselves, unless assistance is required, and won’t get moved into a fresh pen for two hours.

Hik-Connect calving cameras in the shed live-stream to a phone app so multiple members of staff can see in real time if any cows are calving. 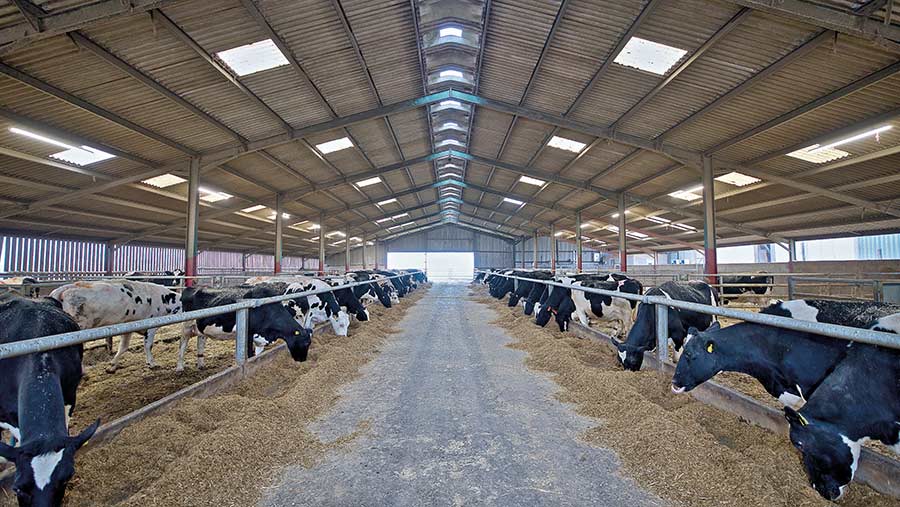 “If you disturb a cow you can set her back [delay calving] up to eight hours,” explains Mr Cope, who attended the World Wide Sires Global Training Centre in 2017 and has been putting the knowledge he gained into practice since he returned home.

John Cook, technical consultant at World Wide Sires, says such disturbance is more of a risk in heifers than in older cows, and adds that such a setback is more likely before labour becomes advanced.

Dr Cook explains: “Once a cow is in the second stage of calving [visible contractions], it is more difficult to stop her calving, but it will affect cows in the first stages of labour.

“Cows are prey species and when they are moved from their social group, it’s the equivalent of being separated by a predator and they will start to block uterine contractions.

Two hours after calving, cows are moved to bails at the bottom of the shed to be milked, and 4 litres of colostrum is fed straight to the calf.

“The idea is that by having the milking facility in the calving shed, we can harvest the colostrum at the right time,” says Mr Cope.

He admits it was more difficult to collect colostrum promptly before, because milking hours dictated when fresh cows were milked. However, by having portable milking machines and bails within the new shed, it means colostrum is collected in a timely manner.

Having the job in fewer hands also means colostrum doesn’t get mixed up and the calf is fed its dam’s colostrum.

Previously, the Copes measured colostrum quality, pasteurised it and froze it in bags to blanket-feed calves. This meant calves wouldn’t always get their own mother’s colostrum.

But they are moving away from pasteurisation because the latest research shows it can affect intake.

“The line of the industry is that colostrum is about antibodies to protect the calf in the first couple of weeks of life, but there are heaps more stuff in colostrum that’s helpful which can be destroyed [by pasteurisation],” explains Dr Cook.

The exterior of the shed © Richard Stanton Photography

One of the most important things supplied from the dam to the calf through colostrum is a “library copy” of white blood cells, he says. He refers to research that shows that calves born from vaccinated dams had enhanced immune responses compared with calves born from unvaccinated animals.

“Therefore, we believe it’s better if we can use fresh colostrum from the calf’s own dam at the start of life. But if you have a Johne’s-positive animal, you shouldn’t use her colostrum,” he stresses.

The Copes test cows quarterly for Johne’s, and any positive animals are tagged, entered into cow management software BoviSync and bred to beef or culled.

Currently, far-off dry cows are kept on a third farm, but the long-term aim is to build more accommodation at Adderley Lodge, so cows can spend the whole eight-week dry period in one place.

Since buying Adderley Lodge Farm, the couple have also converted an existing shed that housed stables into a bespoke calf unit fitted with tube ventilation.

For the first 10-14 days calves are kept in single hutches and fed by hand before being grouped into straw pens of 20-24 calves on automatic milk machines. 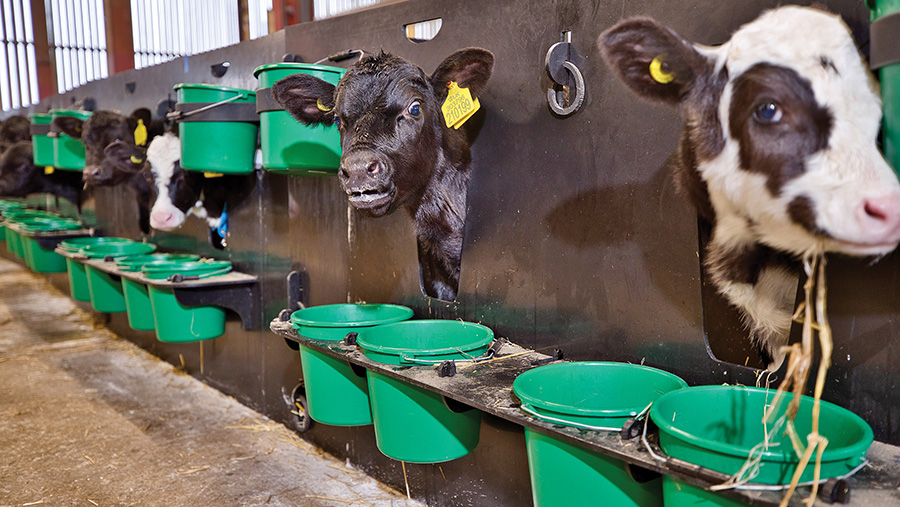 “We have massively improved growth rates since moving to automatic milk machines. We used to feed milk in troughs, but we could never get intakes right. Now we are pushing 10 litres of milk a calf a day,” says Mrs Cope.

This equates to 1,035g of a 13.5% total solids milk powder daily. It is fed alongside a 21% crude protein rearer pellet to aid fast early growth, with calves weaned off milk at 69 days (10 weeks).

The same philosophy of minimising social disruption is being adhered to in the calf barn.

“We had a milk machine years ago and I swore I would never get one again, but we listened to an AHDB webinar and everything that was mentioned not to do we had done before on the old machine.

“We were putting them onto the machine too early, at two to three days old, and had all the calves in one pen, with calves constantly being added and removed, so there was always social disruption.”

The shed comprises eight pens – four on each side – with one automatic milk machine in each. To avoid disruption, calves are left once a pen is filled, with automatic stations programmed to deny weaned animals access to milk. 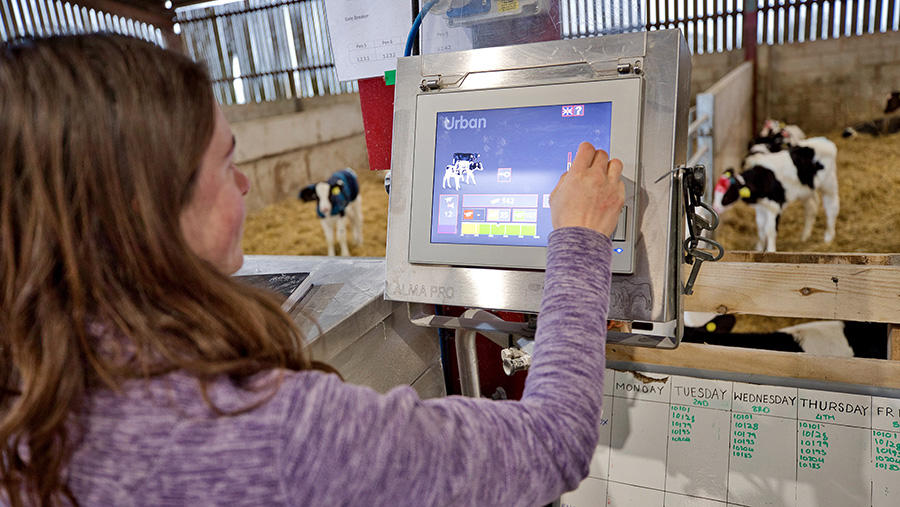 At three to four months old, heifers then move to the contract-rearer’s farm.

Pregnancy rates have lifted dramatically (see “Improvements since the cows moved into the new transition shed”) and cows are reaching peak milk yield faster, too.

Cows are served from 50 days after calving, but the voluntary waiting period on heifers has been extended to 70 days to give them more time to mature. This coincides with timed artificial insemination.

This is because research shows the optimum time for a heifer to become pregnant is between 70-100 days in milk, otherwise survivability in the next lactation can be reduced, explains Dr Cook.

All animals have been on a pre-synch, ov-synch programme since 2014, which ensures they are mated by 78 days in milk.