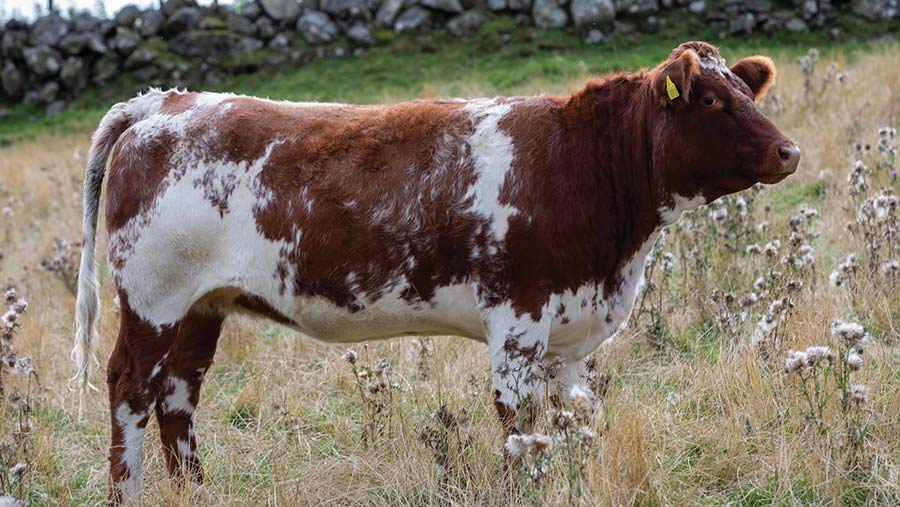 Introducing the Beef Shorthorn to a continental-cross (Limousin and Simmental cross) cow to create a three-way cross is helping improve the milkiness of the heifers on one Scottish beef farm.

Furthermore, calves are growing at 0.8kg per day, mainly off grass alone, which is comparable to continental progeny.

Beef Shorthorns were first introduced on continental-cross cows at Doldy Farms, in Angus, about 20 years ago, when farm manager at the time, David Nicol, bought a Beef Shorthorn bull and used it on his Limousin and Simmental cross cows.

The three-way cross cows were found to be milkier and easier calving, so when his daughter Pamela Nicol took over managing the farm 14 years ago, they decided to start breeding pedigree Beef Shorthorns themselves.

The farm, which consists of 120 cows – 20 of which are pure Beef Shorthorn and the rest commercial ­– is a closed herd with only bulls purchased.

Each year about 12 replacements are retained – four of which are three-way-cross heifers.

Replacements are selected based on their calving ease, milkiness and ability to produce a strong, easy-fleshing calf.

Currently, about 30% of the herd is made up of the three-way Limousin, Simmental and Beef Shorthorn cross, with only heifers mated with Beef Shorthorn due to their ease of calving and milkiness.

“We had some problems with the continental heifers not producing enough milk and even had to cull some as it was costing too much because we were having to use replacement milk.

“The Beef Shorthorn is so milky it has removed that problem,” explains Ms Nicol.

However, this year, Ms Nicol is using the Beef Shorthorn bull on a portion of the cows with the plan to eventually have the three-way cross making up at least half of the herd. 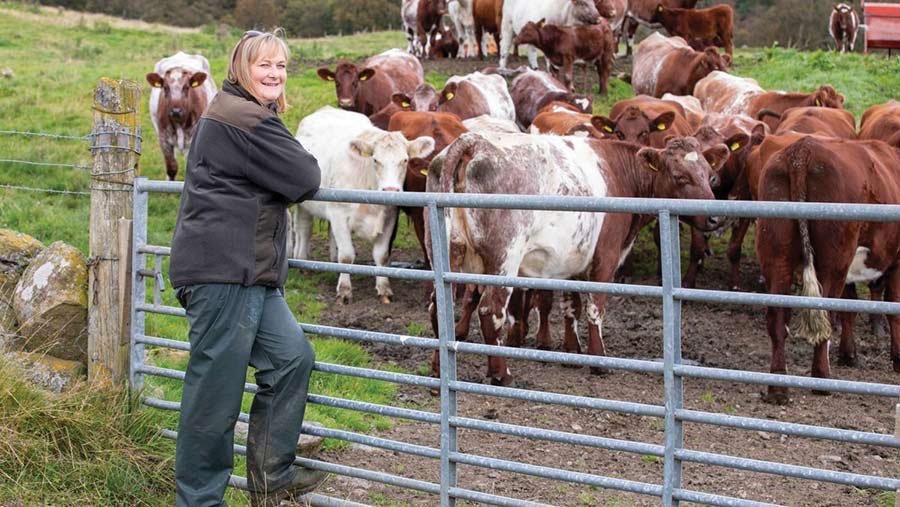 She says: “We are keen to continue driving down costs and the Beef Shorthorn is hardy and can be reared on just forage.

“It will be interesting to see how the Beef Shorthorn calves, off the three-way-cross cows, will perform.

“If they continue to have shape, are easy fleshing and grow as fast off forage, then we may end up moving to 100% of the herd being the three-way cross.”

Breeding their own bulls is not only saving them £6,000-£8,000/year, but it also means they are lowering their risk of buying in disease.

“Commercial bulls are becoming more expensive and we would buy in a commercial bull most years to use on the cows.

“We can instead use bulls from our pedigree Beef Shorthorn herd, and we know exactly what treatment they have had, as well as their breeding performance.”

The Beef Shorthorn, Limousin and Simmental-cross cows suit the hill farm as they are medium-sized cows weighing about 650-700kg.

They are also hardy and lower maintenance than the continental cross.

Cows and heifers graze in-bye land until January, when they are housed and fed silage until turnout in May (depending on the weather).

Cows and heifers calve inside in March and April with almost all the three-way-cross cows calving themselves and 75% calving within the first nine weeks.

The cows can wean a calf about 50% of their bodyweight.

The three-way-cross heifers are put to the bull at 12 months old, weighing about 450kg, to calve at 24 months. They are rearing about 98% of their calves.

Ms Nicol is selecting bulls based on estimated breeding values (EBVs) and conformation. She wants a bull that is average or above in all traits, so they do not get any extremes.

Offspring from the three-way cross

Any three-way crosses retained for breeding are put back to a continental terminal sire – either the herd’s Simmental bull or one of the two Limousins.

This is to keep some shape in the calves as they are all (apart from replacements) sold at about seven to eight months old as stores through United Auctions, Stirling.

The eight-month-old calves are sold weighing between 350kg and 400kg straight off their mothers at grass.

Calves are growing at about 0.8kg a day, which is comparable to continental crosses, says Ms Nicol.

This is growth mainly off grass with only a small amount of creep feed offered ad-lib at the start of September as the grass growth tails off.

Ms Nicol says: “We farm at 820ft, so by the end of August/start of September, the grass is starting to tail off and we can get some frosts, therefore they need some supplementary feed.”

Ms Nicol believes many farmers do not realise the potential of a Beef Shorthorn cross.

“Most buyers don’t realise how good a Shorthorn cross can be.

“My brother uses them and has found a Beef Shorthorn cross finishes faster and better than a continental cross. They are a good feed convertor and low maintenance,” she says.