Most shepherds wince at the thought of triplet lambs but that is not unusual with the Cambridge sheep at Glebe Farm, Bampton, Oxfordshire.

David, Sarah and son Adam New got into the breed, best known for its prolificacy, five years ago. Adam had a small flock at the time and wanted to expand and came across the Cambridge breed on the National Sheep Association website.

The breed, developed at Cambridge University and recognised in 1979 (see ‘Cambridge Sheep Breed’), was originally split into four flocks, so Adam got in touch with the society, and purchased eight shearling ewes from one breeder and a ram from another.

The New family find them to be a very maternal breed, with plenty of milk, good mothering ability and “very capable” of rearing three lambs until weaning. 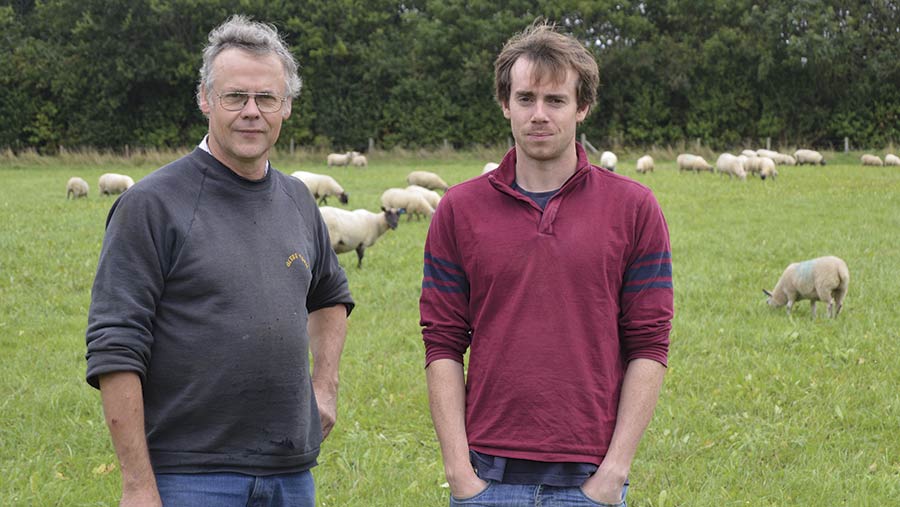 “The ultimate aim is to have a cross-bred ewe that can rear three lambs comfortably,” says David.

The first cross-bred ewes are then put to a terminal sire, such as a Texel or Meatlinc, to produce their ideal lamb for fattening.

The cross-bred ewes are lambing at about 250%. This year’s scanning showed half the flock were carrying triplets or more and the aim is for two-thirds of the flock to scan with triplets. 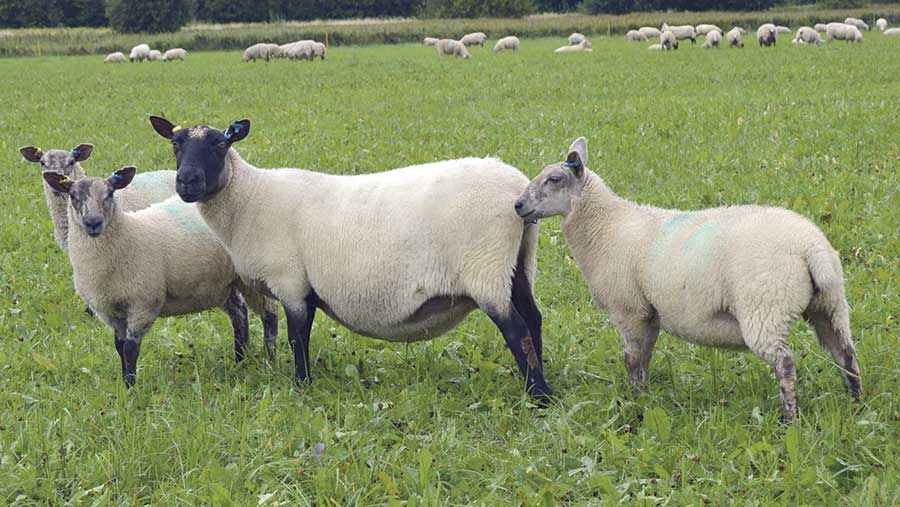 While lambing, which usually begins around mid-April, is an intense period, for the rest of the year the flock is fairly low maintenance.

Lambing is usually not difficult because the lambs are smaller in multiple litters, but with so many lives at stake, they like to be present to make sure lambs get colostrum quickly. Mortality this year was at about 20%, with 197 live lambs born from 91 ewes, resulting in a lambing percentage of 220%.

The News “treat the sheep very much like the cattle” and have a due date for each ewe, determined using raddles on the rams during tupping.

Eight weeks before lambing, ewes will receive a high-energy, high-protein concentrate and anything carrying three or more lambs will be brought in six weeks prior to lambing.

David says they are refining their system all the time and it is by no means perfect, but they can see the potential and enjoy working with the breed.

“It has been a very steep learning curve for us and nutrition is the most important part,” adds Adam.

Typical lamb weights at birth will sit about 3.5kg for triplets, falling to 2-2.5kg for quintuplets. 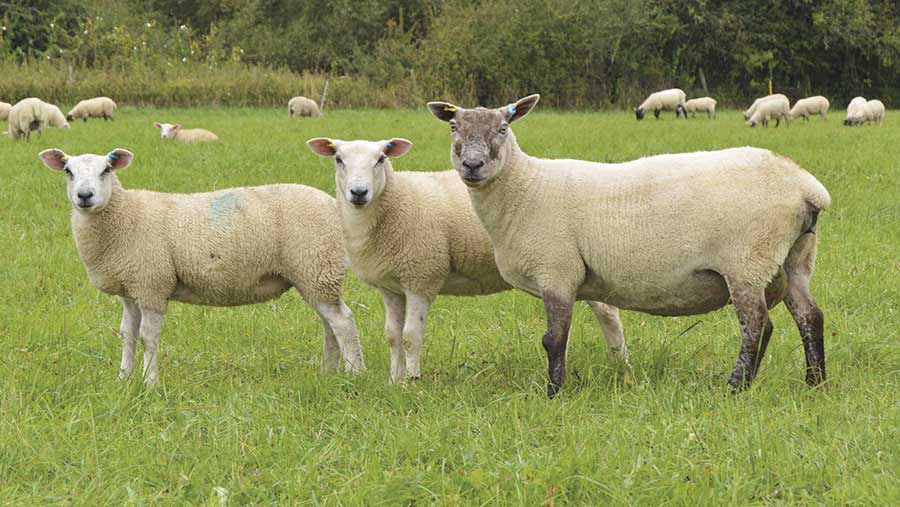 Triplet-rearing ewes will receive a kilogram of the high energy feed a day for a few weeks after lambing, but are then turned out to grass.

This year 20 lambs needed supplementing via the milk bar and anything from a three or more is creep fed for a few weeks before turnout.

Cambridge sheep are known for being good mothers and while there can be cross suckling, the News see no mismothering or lamb vigour issues. 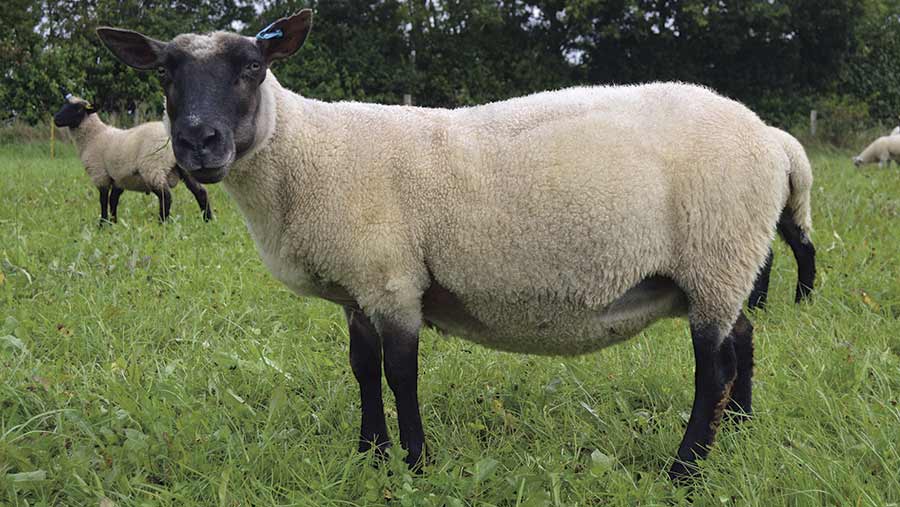 Outside of the lambing window, the sheep are entirely forage based. They need to be low input because the News’ land is so spread out that animals can’t always be checked daily at busy times of year.

Ewes get a “MoT” at lambing time but generally show very few problems with lameness. And lambs are vaccinated for clostridial diseases and pasteurella, with an additional vaccination for orf on the cards for next year.

Ewes and lambs are wormed twice a year, with products they’re allowed to use being restricted by their organic status. They try and operate a clean grazing policy, focusing on rotational grazing and rotating cattle and sheep, with all wormer treatments are informed by faecal egg count tests.

The New family is also conducting blood tests to assess trace element levels within the flock and decide if any supplementation is required.

Lambs are usually weaned at 14-16 weeks. However, because of the abundant grass supply this year, following a very wet summer, ewes and lambs are being left at grass slightly longer and will be weaned at 18 weeks. Fields of red clover within the arable rotation are used to fatten the lambs.

Adam weighs fortnightly and predicts their weaning weights this year will be just shy of 30kg average. The triplet lambs are only 1kg behind the twins.

The organic livestock marketing co-operative sell the News’ fat lambs, with 50-60% off the farm by mid-late October. The rest will be fed a rolled barley and soya blend, ready to be sold in March.

The new season lamb kills out at about 19kg deadweight, typically grading R3L. The purebred Cambridge lambs won’t get fat, says Adam, so they can be pushed quite hard for growth.

Pedigree Cambridge shearling rams are sold at Builth Wells each year, with this year’s sale date set for next week (25 September). Trade is very variable, but Adam and David are hoping that as the breed gains awareness, popularity will increase. They are also planning to pursue maedi visna accreditation to broaden their export opportunities.

Our focus has got to be three lambs, weaning at 35kg, before the end of the first season Adam New

Adam appreciates the breed is more labour-intensive than a lot of commercial flocks, but he thinks the largest potential for the breed is in cross-breeding.

He admits the pedigree Cambridge breed is not a system that would suit everyone, but believes the prolificacy of the breed could be beneficial to many flocks if they can use it to increase their lambing percentage.

“Our focus has got to be three lambs, weaning at 35kg, before the end of the first season. And I think that’s possible,” Adam adds.

“Even if they take a bit longer to finish you are still getting an extra life,” says David.

“With the pressures on agricultural as a whole, we have all got to look at increasing output,” he adds.