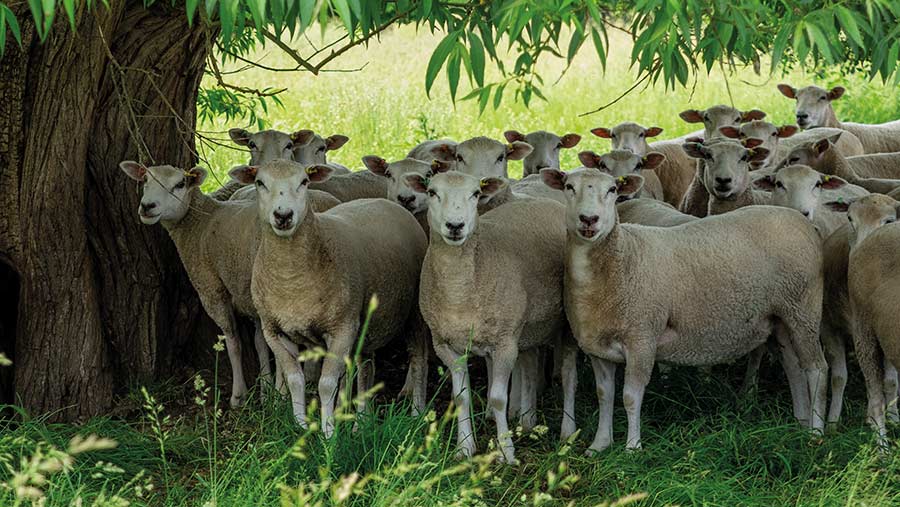 Managing shearlings as a separate group has improved scanning percentage by 10% at a Wiltshire sheep farm.

Rob and Anna Hawke had run their Romney and Romney cross Highlander shearling replacements and mature ewes as one group, but they struggled to maintain condition in the younger animals.

“The shearlings lost condition in the winter and this had a negative impact on the scanning percentage and lamb weights,’’ says Mr Hawke, who closely monitors body condition score (BCS) and weights through the AHDB-funded Challenge Sheep project.

See also: How to get your sheep in tip-top condition pre-tupping

This was due to competition from the ewes and because the shearlings couldn’t be prioritised for supplementary feeding.

By managing them separately on better quality leys, scanning percentage has lifted to 180%, with a 68% twinning rate. 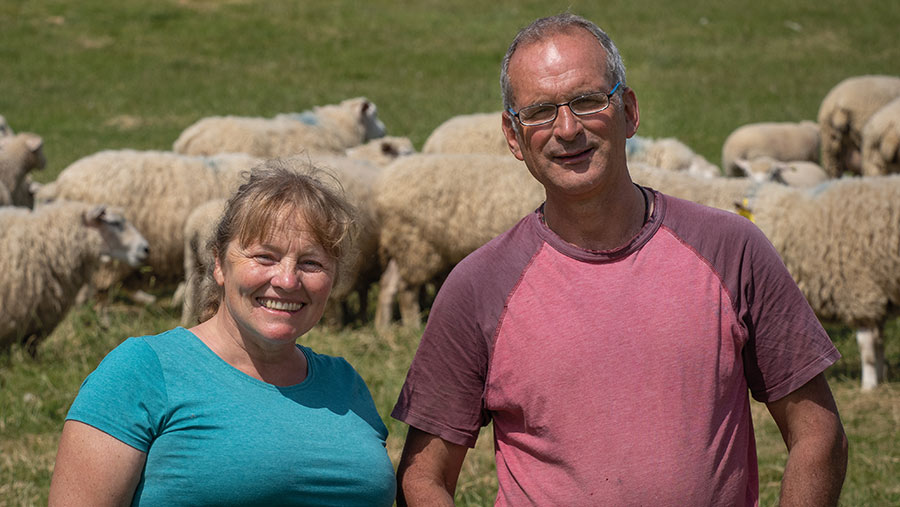 The Hawkes, who farm at Troope Manor, Salisbury, lamb 900 ewes outdoors in April over five weeks. Of these, 95% lamb in the first 17 days. They also lamb 150 ewes indoors in January.

Ewes in the outdoor-lambing maternal flock have four crops of lambs. Thereafter, they are given the opportunity to lamb in the indoor-lambing terminal flock.

This won’t include animals that have had mastitis, a prolapse or other issues that would red-flag them as cull ewes, but could be those that have a big teat or a low lying udder, for example.

Indoor-lambing ewes are sponged in August to bring them into season – around 200 are sponged each year and achieve a 70-75% conception rate.

After these have reared their lambs they are culled, and the lambs sold into the fat market. It is an intensive system, with progeny creep-fed, and the majority are sold by the end of May.

Lambs from the outdoor flock are sold as finished or for breeding after replacements have been selected.

Twin-bearing shearlings are grazed on stubble turnips prior to lambing in mid-April and are supplemented with concentrates for a month after lambing. Their lambs are offered creep to take the pressure off their mothers.

The shearlings are prioritised for feeding right up until their second tupping.

“Farmers who tup ewe lambs will run them as a separate group, but it is imperative that shearlings are managed separately, too,” says Mr Hawke.

“We now get fewer light lambs and the subsequent performance of both the shearlings and their lambs is better,” he adds.

The selection of shearling replacements begins before the lamb is even born. Only ewes that meet criteria on scanning and rearing history are put to a maternal ram – the aim is to breed replacements that predominantly produce twins.

To meet the criteria, a ewe must have a lifetime average scan of 170% or higher, have produced no more than one set of triplets at scanning, bred no light lambs and maintained a BCS of at least 3.

She must also be in the top 70% of ewe efficiency, rearing as close to her body weight at weaning as possible. For example, a 70kg ewe weaning two 35kg lambs is 100% efficient.

When ewe lambs are born, replacements are selected initially on weight, and the criteria then shift to BCS, although weight is still recorded and monitored for consistency.

All shearlings must achieve at least 80% of their target mature weight at tupping time. For the Hawkes’ specific breed and system, their mature ewe target is 70kg.

Shearling ewes that meet the 80% target produce more lambs on average, says Mr Hawke. Their lambs are also heavier at weaning – the average for the flock is 30kg at 80-90 days.

The Hawkes achieve this in their replacements by setting a target weight at eight weeks of 21.5kg

“At every weighing after weaning, we drop around 10% of the ewe lambs from the replacement group,” he explains. “We now have lines in the sand for target weights at each stage.”

Lambs must be 43kg or heavier by 1 March to allow for a daily liveweight gain (DLWG) of 100g a head up to the end of September – at that point they should all be above the minimum weight target of 58kg (slightly above the 80% target).

“Last year the shearlings were 54kg on average on 1 June, which means that if the farm dries out, their growing is nearly done,’’ says Mr Hawke.

The shearlings lamb outdoors. To achieve a tight lambing, rams are turned in for two cycles totalling 35 days – in the 2020 breeding season, 90% conceived in the first cycle.

Any shearlings that are under 43kg when they come off stubble turnips in the first week of March join the fattening group because they won’t be well grown enough to compete with the heavier animals.

Making this decision early on in the season provides the best alternative return on that lamb, says Mr Hawke.

“Instead of getting to September and realising that we have 30 or so that are not good enough to breed from, by killing them in March they can be sold on the hook and won’t be eating grass all summer,” he adds.

There are 280 shearlings and another 100 have been sold as breeding animals, but there were 450 in the original group earmarked as replacements.

Mr and Mrs Hawke don’t lamb ewe lambs because the quality of their grass is not good enough to support them.

“Ninety percent  of our grassland is permanent unimproved grassland and is in some kind of stewardship scheme,” explains Mr Hawke.

The flock management policy has been informed by data collection in the Challenge Sheep project which uses electronic identification (EID) to track the lifetime performance of replacement ewes.

The Hawkes are first-generation farmers and established their own flock 15 years ago after managing flocks for other people. They have been collecting data for 11 years. They don’t receive a Single Farm Payment and realised when they established their flock that flock efficiency was key to profitability.

Before they started using data to inform their replacement policy, ewes were scanning at around 150%. It is now around 183%.

“Collecting data supports decision-making,’’ says Mrs Hawke. “It makes record-keeping simple and allows information gathered in the field to be converted into a powerful management tool.’’