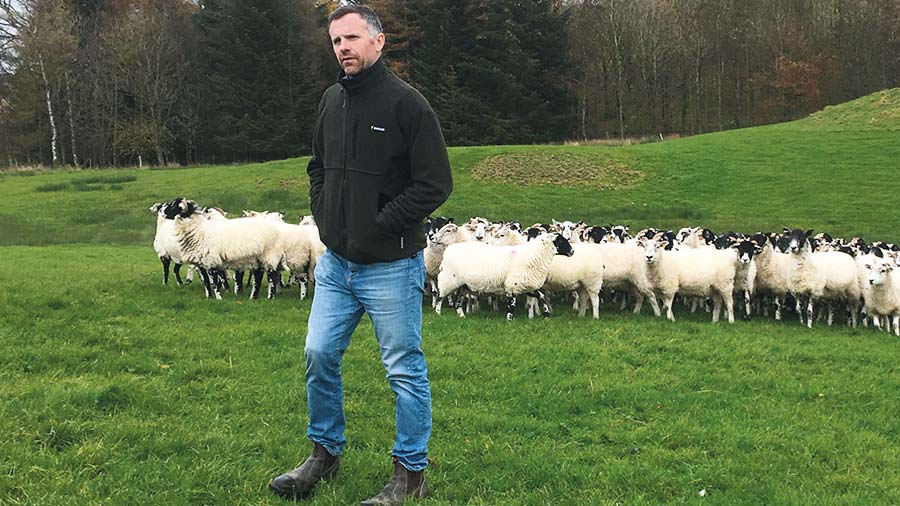 Lake District farmer Pete Webster has reduced replacement rates from 25% to 20% since radically changing his breeding policy and developing a strict culling plan.

“It became apparent that putting condition onto ewes and lambs was very costly with the breeds we were working with. I needed a sheep to work for me, not me work for it.”

Along with other Challenge Sheep farmers, he has been using data collected at specific times throughout the year to inform management decisions.

He found low-condition ewes were scanning lower and weaning lighter lambs, as well as needing additional concentrates and veterinary treatments.

When he looked at ewe longevity, he could see he was culling too many ewes for being too thin and having poor body condition scores (BCS).

Until he joined the project, Mr Webster had a traditional stratified system on his organic upland unit, with two-thirds Swaledales and one-third North of England Mules.

In anticipation of a decline in farm support payments, and with full buy-in from his stockwoman, Joanne Bentham, he has introduced a number of composite breeds.

The aim is to produce a closed flock of white-faced ewes, bred to perform outdoors off grass, with an average mature weight of 60-65kg.

He admits his new sheep breeding policy will not suit all farms, and a shift in mindset has been needed to see the benefits the changes can bring.

Many traditional hill and upland units successfully use standard native breeds to produce lambs, he says, but such a system wasn’t working well at Matson Ground.

Every factor is key, but decisions based on BCS and weight have made the biggest difference, he says, because they affect fertility, energy and milk production.

He now has “A” and “B” flocks: the “A” flock is made up of all his replacement ewes, tupped with maternal sires, while the “B” flock contains all the rest, tupped with terminal sires.

Lambing starts in mid-April, all outdoors, and despite the variety of breeds being used, ewe BCS has already lifted by half a condition score and lambs have considerably higher growth rates.

Lambs are sold as stores or breeding ewe lambs by the end of August. Store lambs are all sold to one finisher as a single batch on one day, averaging 34-35kg.

Shearlings and older ewes are managed in separate groups right through to weaning to help keep ewes in good condition throughout lactation and improve their longevity, and ensure they get the best grass.

Scanning and weaned lamb targets are 175% and 160% respectively.

“Three years into the new genetics, we’re close to where we want to be,” says Mr Webster. “In reality, we will probably end up at 180% scanning and 165% weaned lambs.”

Aiming for a higher scanning percentage would lead to unwanted triplets and the need for additional concentrates, he adds. “As an organic producer, concentrate feed is nearly double the price, compared with the standard.”

Two years before joining the Challenge Sheep project, Mr Webster was well aware that the condition of his sheep was costing him dearly. Taking part gave him the push to make changes.

“I wish we’d done this 10 years ago – it’s obvious now, financially and in terms of performance of stock, that we were on the wrong track. What we’re doing is not rocket science – the aim is to get the best sheep to suit our farm.”

What is Challenge Sheep?

The Challenge Sheep project is tracking 7,000 replacement ewes from a total of 11 farms across England.

The aim is to examine best practice for the management of replacement ewes by sharing data and knowledge.

Four years into the project, the farmers involved have proved that using EID data consistently to identify and remove underperforming ewes from their flocks helps to improve overall performance and make sheep production more profitable, sustainable and viable, according to AHDB.