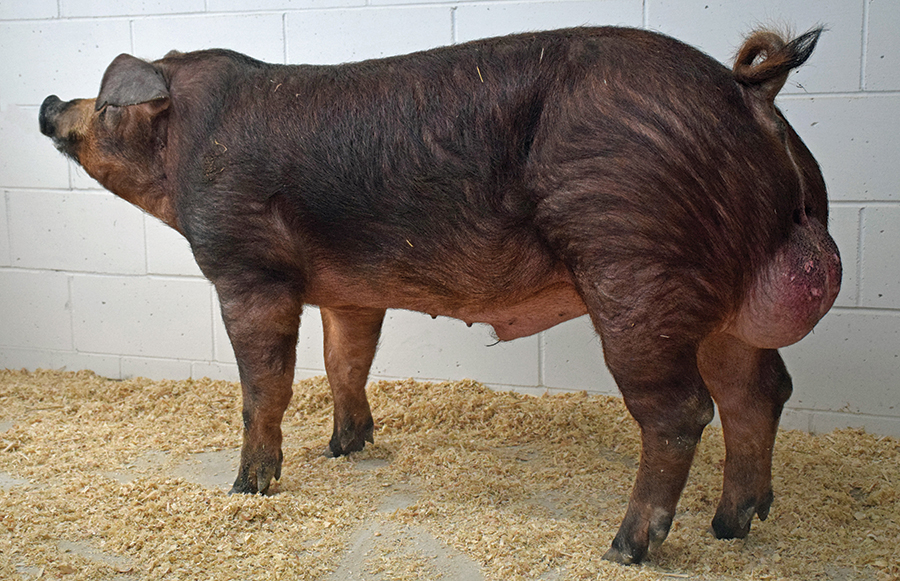 Attention to detail in the boar stud when it comes to housing, health, feeding, semen collection and processing has allowed farmers to access superior genetics of the highest health status and speed up the genetic gain in their herd.

At Rattlerow Farms more than 540 boars are housed across five separate farm studs making it one of the largest independent pig genetics companies in Europe.

Below, Farmers Weekly takes a look behind the scenes.

Only the top 3% of boars from their nucleus farms are selected for AI.

The boars are replaced at regular intervals by superior animals predicted to improve performance. This ensures that genetic improvement is continuous. 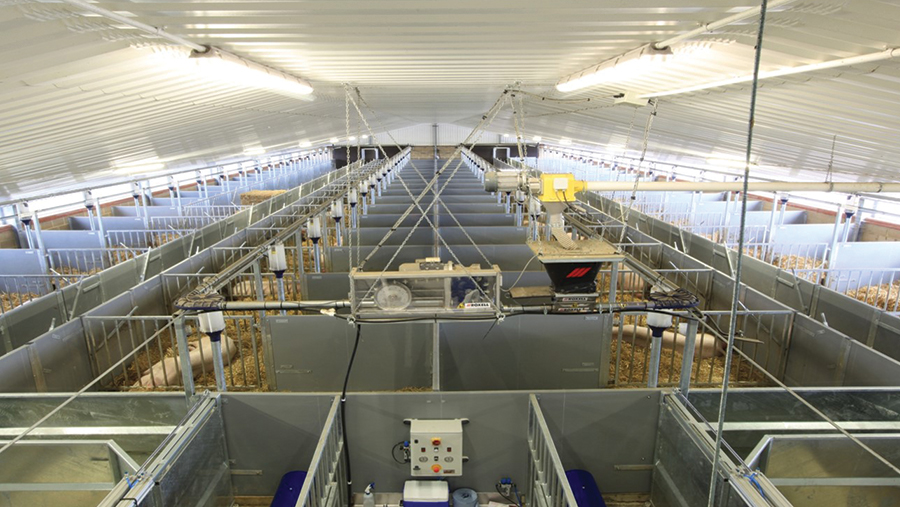 Each pen has a solid front and slatted sides, so the boars have contact with their neighbours. The solid front aids the movement of animals from their pen to the semen collection area and increases health and safety for the stockworker.

The buildings have 10 inches of insulation in the roof and walls. They are controlled with air conditioning to ensure a constant temperature of 18-20C, regardless of outside weather conditions. An air filtration system also maximises air quality.

Boars are fed using an automated system once daily according to their condition and size. The feed contains a specific supplement to enhance sperm production. 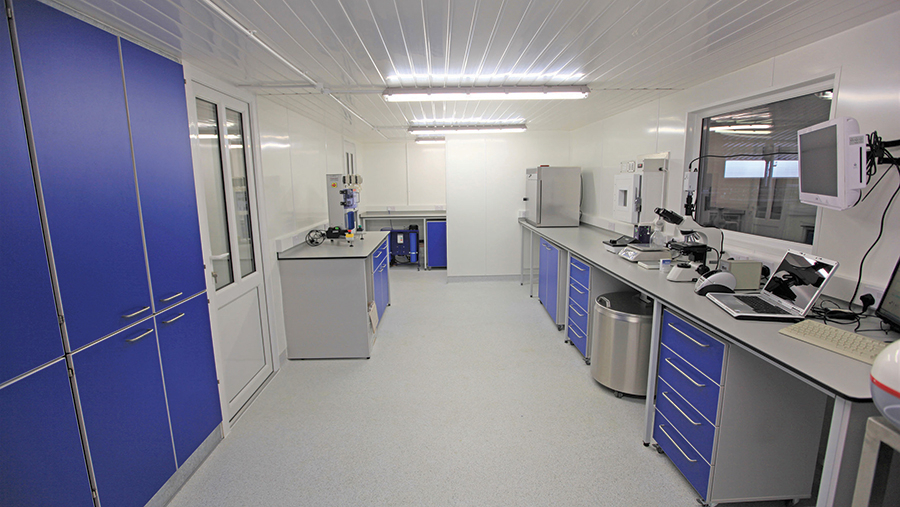 To minimise disease from entering the studs, the farms are in isolated areas of low animal density. Strict biosecurity controls covering staff, animals, feed, bedding, and vehicles are constantly maintained.

Boars are checked at least once a day by the stockworker and receive a vet inspection every week.

Boars are tested weekly for Porcine reproductive and respiratory syndrome (PRRS). Samples are taken from boars housed in different parts of the shed using Elisa and PCR tests.

On arrival, boars are housed in individual pens. Training in the semen collection pen begins straight away with daily access. Some boars need a bit of training and coaching in order to mount the stainless-steel dummy.

In this instance, pheromones are sometimes sprayed onto the dummy to encourage them to mount.

Within two weeks the boars are usually trained and ready for their first semen samples to be collected. 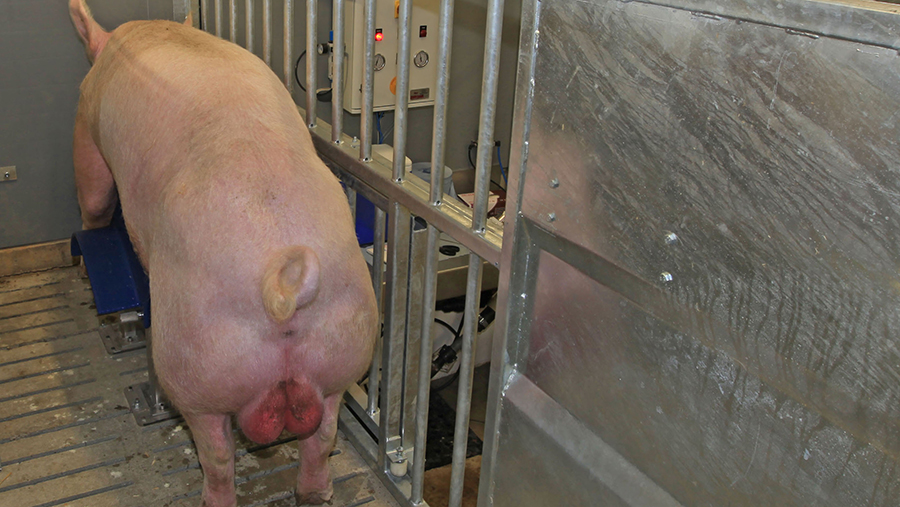 The flooring in the collection pen is slatted with rubber mats to aid hygiene and comfort.

Rattlerow Farms is unique as it is using a semi-automated semen collection system called Collectis, instead of collecting by hand.

When the boar mounts the dummy an artificial vagina, fitted with a flexible membrane, is fitted to the boar’s penis.

A pneumatic system then sends varying pressures during collection to the membrane which imitates the uterine contractions of the sow to stimulate the boar. The stockworker can control the amount of pressure remotely.

A pre-warmed collection bag is attached to the bottom of the artificial vagina ready for ejaculation. The amount of semen collected per ejaculate can range from 300ml up to one litre.

Collection using this method has improved the health and hygiene of the semen.

The system is set up so the stockworker operates at eye level, as would be the case in a dairy parlour.

Once the boar has finished, the door is automatically opened and they can return to their pen. Another boar can then be brought in.

Three boars can be collected at once with just one operator. The handler does not have to enter the collecting pen while the boar is in it.

Most boars have semen collected on a Saturday so it can be processed and dispatched the next day and will be on farm by Sunday/Monday.

Semen is collected more often from older boars. This is because they are more “sperm productive” so an extra collection does not have as much of an effect on density and volume of ejaculate in subsequent collections as it does with younger boars.

Once finished, the semen is transferred into another pre-warmed, sterile bag which is sent directly to the laboratory. 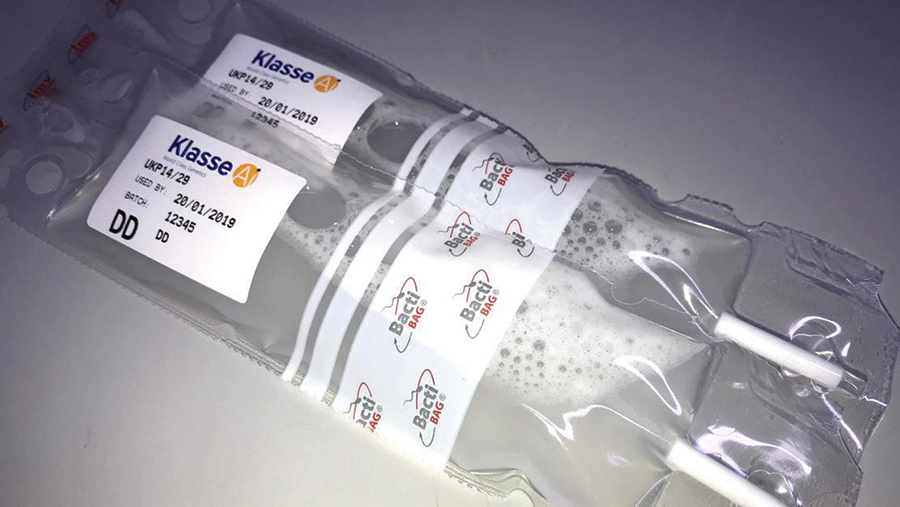 Once the semen is in the lab, it is measured and samples are taken. Semen is analysed using a computerised system, Casa.

This records the speed and distance of sperm to accurately gauge sperm motility and pick up any defects as well as the number of sperm cells in the ejaculate.

Once it has passed the test, the sperm is diluted and pooled with up to four more boars within the same sire line. This has been found to improve conception rates. A long-life extender is added to maintain semen quality.

The semen is cooled to 17c and dispatched in temperature-controlled vehicles. Semen is usually delivered to the farm within a day of being collected as the shelf life is relatively short at between six-to- 10 days.

The lab keeps samples from each batch which are then monitored on days one, three and six to check the semen are still healthy and mobile. If there is a problem, the customer is informed.