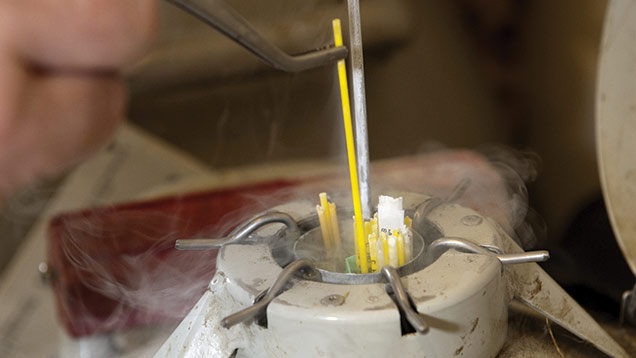 Genomic sires are growing in popularity among UK dairy farmers, according to sale statistics.

Farmers Weekly spoke to three leading AI companies at this year’s Livestock Event and each one confirmed that sales of genomic bulls has grown year on year since their release.

Stephanie Whittaker, European dairy brand manager for Genus, said the fact that UK daughters of genomic bulls are performing well has given their customers confidence to use more genomic semen.

She added: “Some farmers were initially very quick to start using genomic bulls across their herds, but most just dipped their toe in the water and tried a little bit along with proven semen.

“Some farmers were initially very quick to start using genomic bulls across their herds, but most just dipped their toe in the water and tried a little bit along with proven semen.”
Stephanie Whittaker, Genus

“Today the daughters from this initial use of genomic bulls are calving all around the country and farmers are really pleased, in general, with the results.”

She said the gap in genetics between the genomic and proven bulls, mean many farmers see using genomics as lower risk.

“Even if a genomic bulls proof does come back it still has a really good chance of being higher than a proven bull they would have used at the same time.”

However, she says they have noticed a trend with some farmers using older genomic bulls, about two to three-years-old, as they have actual calving ease information and are more likely to be by sired by a proven bull, which can result in fewer fluctuations in its proof than if it was sired by another genomic bull.

“We also see the first step by many into genomics being through sexed semen. This should be the most profitable cross; heifers being the most genetically advanced animals in the herd.”

Cogent says they have also seen a “dramatic” change from proven sires to genomics as confidence has grown as the reliability has improved.

Andrew Holliday, Cogent genetic consultant, said: “We are confident that if you buy a bull within the top 10% at the time, he will be in the top 10% when he is proven.”

He added: “It takes five years for a bull to become proven. Genomics is allowing us to react to the marketplace better.

“The proven bulls we bought when the market was at a different stage, when people were demanding more milk and type,” he added.

Mr Holliday said there has since become a seismic change towards bulls that have high butterfat and protein driven by solids production contracts.

He said buyers were also putting more emphasis on health and fitness traits as a result of milk contract obligations that require farmers to mobility score and lameness score cows.

He said: “A lot of genomic bulls offer the whole package; fat, protein and health traits.

“The problem is young bulls produce a lot less semen so we need to stock five to six genomic bulls to provide as much semen as one proven bull, so we have to keep a lot more bulls on production,” added Mr Holliday.

Mr Dennison said the fact many of their genomic sires have progressed to high rankings in proven league tables has given their customers confidence to use Immunity+ bulls which have a higher immune response to fight off infection.