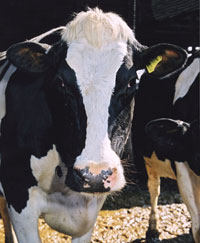 A familiar name takes the number-one spot in the January Holstein bull proofs, with O-Bee Manfred Justice in top place in the DairyCo rankings released this week.

An improvement in his PLI sees his figure now standing at 267 after further improvements in his daughter fertility index, which is now +1.6.

Reflecting the demand for longevity in the national herd, all of the top 10 ranked sires are cow survival improvers, says Marco Winters, director of DairyCo breeding+. “As a group they also improve daughter fertility with an average fertility index of +1.9.”

In second place is Laudan, who also tops the lifespan improvers, his daughters surviving nearly a full lactation longer than the average cow. His PLI has improved 15 points since February, now standing at 229.

Third spot falls to Wizzard, with a fat figure of +40.9, making him the best fat improver of the top 10, says Mr Winters. “In fourth is a bull re-entering the top 10, Braedale Goldwyn, who gets there on the back of a daughter SCC score of -22 and a type merit value of +3.6.”

But it is Justice who dominates the rankings. The best of his sons, Wa-Del Hayden, now enters the top 10 at sixth place. “This one is out of a Mtoto dam and has an impressive SCC score of -22, a lifespan value of +0.2 and an incredible fertility index of +4. Alongside this he also ranks +1.6 for type merit, making him an attractive package for many herds.”

Highest among the British bulls are joint 14th place Burlane Tennyson, who improves his PLI by 10 points to 179, and Bilsrow Jock.