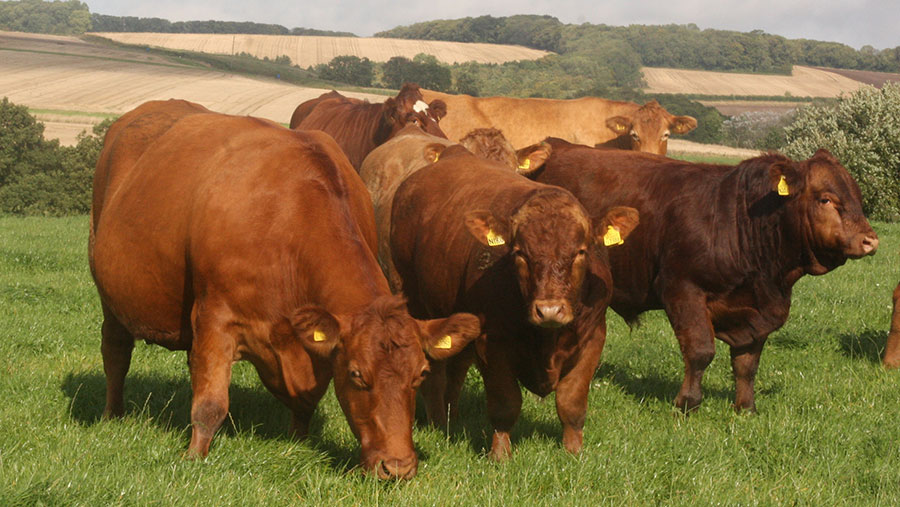 The new index is a data-backed genetic selection tool that accurately weighs 15 economically relevant traits (ERTs) against each other using a simulation model.

It greatly simplifies genetic selection by giving producers a single £Profit figure to represent how profitable an animal will be during its production lifetime.

See also: How to use personality tests to hire and manage farm staff

Based on data collected from the UK beef industry, £Profit Index assumes one bull will sire 140 calves in his lifetime and that 30% of these calves will be kept as replacements, and the remaining 70% will be finished to slaughter on farm.

These assumptions are used to weigh the relationship between ERTs and associated farm costs such as pasture, feed and premiums/discounts associated with the EU’s carcass-grading scheme and associated payments to farmers.

Finding middle ground to hit those optimal trait levels is one of the most complicated components of making genetic selection decisions with [estimated breeding values], since heavier emphasis in one direction can have an adverse knock-on effect to another.

“Increasing it can be worth a ton of money, but eventually too much will have a negative effect due to costs associated with overweight carcass docks, fertility issues, dystocia and the amount of feed it takes to maintain bigger cattle.”

According to Richard Fuller, business director of SCC, £Profit Index is a step forward in the firm’s genetic development which it hopes will bring more profitable and efficient cattle to the UK marketplace.

“The £Profit Index is an advanced and unique multi-trait genetic-selection tool that will really drive the profitability of the whole Stabiliser population in the UK.

“This is a very positive move for the UK beef industry with the ability to select the most profitable animals for their breeding herds backed by data – increasing genetic accuracy,” says Fuller.

“It also opens the door for UK beef producers to make genetic comparisons between cattle from three different countries, with more than one million animals in Australia, New Zealand and the USA on the database.”

Stabiliser Cattle Company breeders have had access to £Profit Index since December 2017.